One thing you may not know about me is that I’m a bit of a metalhead. Surprised? 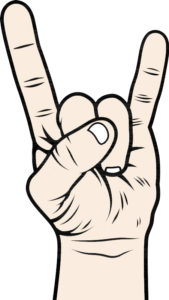 Surely that long-haired, gluten-free, kale-munching millennial hippie must only have the constitution to stomach snooty classical music or sickeningly-sweet bubble pop.

Sorry folks, this sick mane was made for one thing and one thing only.

So throw up the horns, thrash those locks and learn some cool stuff about rock n’ ROOOOLLL!

Rock is loud. That’s kind of its thing. But how loud? We measure sound in decibels, which would need an article of its own to really explain. In a nutshell, a sound that is 60 decibels (a regular conversation hovers around this) is 10 times quieter than something that is 70 decibels (about the ambient noise of a crowded city street). The average rock concert blares a solid 150 decibels at the speakers (or 158 inside of the speakers) and is considered one of the loudest things on the planet. While this might seem totally outlandish that there aren’t many things louder than something we listen to for joy, this is primarily because of how sound interacts with air. Sound is just a vibratory reaction of energy traveling through air. Rock bands use powerful amplifiers that convert electrical energy into vibrations that our ears (and literally the rest of our body at that point) can process.

Another interesting tidbit here is that over 140 decibels, the vibration actually begins to alter the air you’re breathing in and out of your lungs. Prolonged exposure at levels exceeding this ultimately lead to death from things like pulmonary embolism and other un-fun blood-in-your-lungs related ways of dying.

Once things start going over 190dB, the distinction between sound and explosive shockwave starts to blur. Between our eardrums bursting, our lungs filling with blood and us dying a death that would make Dio proud, the air actually becomes so hot it would do the same damage as being hit by a freaking explosion. Dude!

You need some serious power to make sound like that. Some touring companies have systems that use anywhere from 300,000-400,000 watts of power. That’s like using 1,000 microwaves all at the same time for hours at a time. Can you imagine how many frozen burritos you would have to eat to get your fill of metal?

I’ll tell you: 1,476 burritos. Maybe if you’re listening to The Prince of Darkness, they could be bat-flavored burritos.

Rockers get a pretty bad rap for being dumb and rebellious. To some, it’s a badge of honor. To others, it’s an insult. It’s a dated cliche and it’s pretty narrow minded. There are a ton of rockers with degrees in advanced studies — the kind of stuff most of us couldn’t figure out with enough energy drinks to leap across the sky like a tiger.

Brian May of Queen has a Ph.D. in astrophysics. The coolest thing about this is he didn’t just get rich and famous and decide to go get a doctorate, he actually put his doctoral studies on hold when Queen started gaining international fame. He even helped NASA work on New Horizons that flew by Pluto recently. Talk about being a supersonic man.

Milo Aukerman was a rocker of the punk variety with a Ph.D. Lead singer of the punk rock band The Descendents in the late ‘70s, Aukerman and the rest of the band would pave the way for groups like Green Day, Blink 182 and Fall Out Boy, to name a few. He has a degree in biochemistry and has spent his post-rocker days as a researcher for DuPont. While he may not have contributed, DuPont has landed in hot water in the past for some of the shady nonsense companies like Monsanto — err, “Bayer” — were performing to genetically modify and patent seeds that would grow into food we eat. But that’s a discussion for another day.

Rockers have had a pretty bad reputation for seriously questionable levels of womanizing. I mean, really, Winger? No one could release a song like “Seventeen” in ‘19. This is a trait I’m definitely not defending two weeks after the Warrior Women column, so instead I’m highlighting something awesome: women rockers!

Kick-ass women like Ann and Nancy Wilson of Heart, Joan Jett and Stevie Nicks helped pave the way for women rockers blowing up our speakers today. Lzzy Hale of Halestorm is a big name right now, and with good reason; with smooth, but strong vocals and a no-apologies attitude, she’s everything a rocker should be. One of the coolest rocker women out right now has had a serious technological edge over most of her competition.

Diamante Azzura Bovelli shucked the conventional road to discovery, rising to popularity by networking and singing on Youtube to a large fanbase, unrestricted by labels or corporate nonsense. This model of relatively unrestricted self-expression and advertisement, once feared as the death of corporate record labels, has been a tremendous boon to independent creators all over the world. Digital mediums like YouTube are opening doors for incredible talent that has, until recently, likely been overlooked by talent agents and big entertainment companies that once ruled supreme and governed our likes and interests.

I mean, sure, YouTube still does that, but with that platform and others like it, the public has a much greater possibility of finding and exposing something that makes you want to throw the horns and thrash your mane. Rock sure ain’t the only art that’s undergoing this transformation, and I think that’s radical, dude.