Get your rock on at the Eagles this weekend

To those about to rock, we salute you. 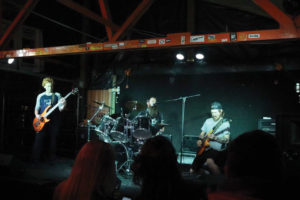 Cobra Jet doin’ what they do: rock! Photo by Cobra Photography.

Three high-energy rock bands will be playing a special show at the Eagles Lodge Saturday, Feb. 23. Cobra Jet, High Treason Ammunition and a band yet to be named will join forces to bring a free show to those wanting to bang their heads a bit.

“I actually stole that phrase from one of those big tractor tires I saw in the Farmin Stidwell playground,” Owens said. “I saw that and thought, ‘That sounds pretty cool.’ We’re somewhere in that fine line between metal and hard rock, depending on where you’re looking at it from.”

Owens said their brand of “super-hard rock” is actually more like metal of yesteryear, before it morphed.

“Metal has sort of changed over 20-30 years,” he said. “A lot of what we grew up on was Iron Maiden, Metallica, Judas Priest. A lot of the metal today is like death metal, guys gargling socks or something. We don’t really do that. We’re not really morbid.”

Cobra Jet consists of Owens on drums and vocals, Reese Warren on bass and Brandon Andersen on guitar.

Owens said his band plays mostly originals, but will throw a cover in here and there.

“We like to write our own stuff and be creative,” he said. “We each have ideas, then we get together and throw them out there and hammer something together. I do most of the lyrics, and sometimes Brandon will give me a line or two, because he has to write all the guitar parts. Or he’ll have a weird ideas for a theme for a song and we’ll work it together. Reese is really good at making parts fit together. It’s a collaborative effort.”

High Treason Ammunition is a punk/hard rock trio hailing from just over the Idaho-Montana border consisting of Trevor Kayser on guitar and vocals, Jenna Kayser on bass and Ali Maverick Thomas on drums. Their sound is more on the punk side of rock, but it’s a hybrid Montana backwoods punk with lyrics that make you smile and a driving beat that keeps your feet tapping. 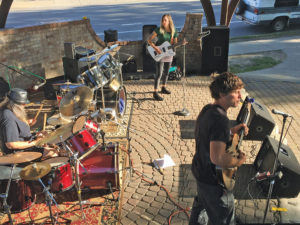 “We don’t really play one sound completely,” said Trevor Kayser, when asked to describe High Treason’s sound. “If anything, it’s punk, it just has a little bit of an attitude. Whenever we write, we’re not trying to write a punk song, we’re just writing what comes.”

High Treason Ammunition will also be playing the Follies afterparty at Eichardt’s Pub on Saturday, March 2.

The third band playing at the Eagles Lodge doesn’t actually have a name yet.

Owens said he invited them to play after overhearing their rehearsals.

“We were down in those rehearsal studios underneath the music shop on First and winding down from practice and heard another band through the wall,” Owens said. “I said, ‘These guys are really good,’ so I found out who they were and asked if they’d come play. They just play down there for fun and don’t play out of anything, so they never made a band name.”

Owens said the third unnamed band will kick off the evening at 8 p.m. and will be followed by High Treason Ammunition and Cobra Jet.

The Eagles hosts a hard rock show a couple times a year, mostly because they are accepting of loud rock music, said Owens.

“I have gone around to some of the downtown places and didn’t get invited to play there,” Owens said. “Whereas I called the Eagles and they said sure. I think a lot of places just want chit chat over music, and that’s hard to do with Cobra Jet playing.”

Catch Cobra Jet, High Treason Ammunition and a third mystery band at 8 p.m. Saturday, Feb. 23 at the Eagles Lodge, 1511 Johnny Long Road (near Baldy and Division). There is no cover for this 21 and up show.