Brenda Hammond sat in the balcony of the then Sandpoint High School gym in May 1991. She was there to hear members of the Kootenai County Task Force, including Bill Wassmuth and Marshall Mend, rally support against local issues of white supremacy. It was a packed house, she said, and when a majority of the crowd gave standing ovations, the minority that remained seated stuck out like a sore thumb. 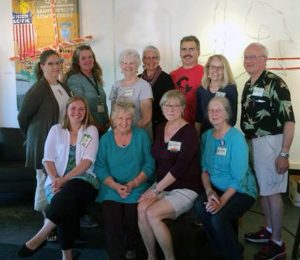 It also helped that they were wearing swastika armbands, she said.

Richard Butler, founder of the Aryan Nations neo-Nazi group that occupied Kootenai County for many years, and several of his supporters attended the meeting. Despite their presence, Hammond said a message of positivity prevailed.

“It became clear that day that we’d organize,” she said. And thus, the Bonner County Human Rights Task Force was born the next year.

Today, president Lynn Bridges said the BCHRTF board consists of a dozen volunteers, and membership is over 300. She said those members pay a one-dollar yearly fee, keeping money from being a barrier to joining. Those members then receive updates from BCHRTF via email or paper mailings.

People have both an opportunity to become BCHRTF members and chime in about community issues the group should tackle on Saturday at Evans Brothers Coffee from 1-3 p.m. The occasion marks the organization’s 25th birthday.

Bridges said BCHRTF is currently working to advocate for both mental illness and LGBTQ issues, among many other ideas. She said the high suicide rates among queer teens make it an issue that requires attention from human rights activists.

“How do we give more understanding, and more education?” she said.

While the BCHRTF has expanded to encompass human rights beyond race relations, it was the growing influence of Butler’s compound in Hayden Lake that prompted that 1991 meeting with the Kootenai County Task Force.

Since the formal creation of the BCHRTF in 1992, past task force president and current secretary Brenda Hammond said the organization has a rich history of non-violent protests and other actions in the name of human rights. The task force also gives grants to other organizations fighting for human rights in the area, and scholarships to local students. One such instance is the National Alliance on Mental Health’s mental health crisis hotline, which BCHRTF helped fund.

And with the help of a recent donation of $300,000, the BCHRTF hopes to keep funding similar projects.

“We are open to any groups that are promoting human rights,” Bridges said. “We are all about education.”

“We want people to at least hear a different view,” she said, emphasizing the importance of looking for common values like family, community and freedom when speaking with someone who might hold a differing ideology. To find those connections, Bridges said, you have to listen.

Listening has been a staple of the Bonner County human rights movement since its beginnings, according to Hammond. She remembers clearly when Butler obtained the microphone used for the Q&A portion of that 1991 meeting. Butler used the moment to preach his neo-Nazi beliefs, and when he went on for some time, one of the kids that accompanied Hammond asked why they were letting Butler speak. Hammond explained that by spouting his platform, Butler was discrediting himself — but to truly understand his “preposterous” beliefs, people had to listen.

“I’m really proud of this area. People really rose up,” Hammond said, noting that human rights work in Bonner County is far from complete. “The way forward is building bridges.”