Food plays a unique role in our lives: one part genetics, one part art, all parts necessity. Despite the multi-millionaire chefs on our TVs telling us otherwise, taste is an incredibly personal experience that can’t truly be quantified on a simple scale. Everything from experiences with certain foods throughout your life to your genetics influence how food tastes to you and what kind of emotions that food evokes.

Gordon Ramsay may be extremely well-versed in the culinary world, but that shouldn’t cheapen what macaroni and cheese with diced hot dogs means to you.

Having mentioned that, try not to get up in arms when I attempt to sell you on the idea of meat that isn’t really meat… except that it sort of is.

Traditional meat production is a controversial subject that includes huge amounts of misinformation and factual obfuscation, primarily by some of the largest processors in the world. As with most things, the blame shouldn’t fall on the producer (or farmer, in this case), but the people in suits that built and maintain the system that harms our species in the pursuit of profit: the big meat processing industry.

Here is a fact about cattle: cows burp a lot. A single cow produces about 220 pounds of methane gas per year. Currently, there are an estimated 94.4 million head of cattle in the United States, which would equate to about 20.7 billion pounds of methane per year. When it comes to greenhouse gas emissions, methane is 28 times more effective at trapping heat than carbon dioxide, meaning the carbon footprint of a single cow is closer to 6,160 pounds of CO2 per year, or 581 billion pounds for every cow in the US. 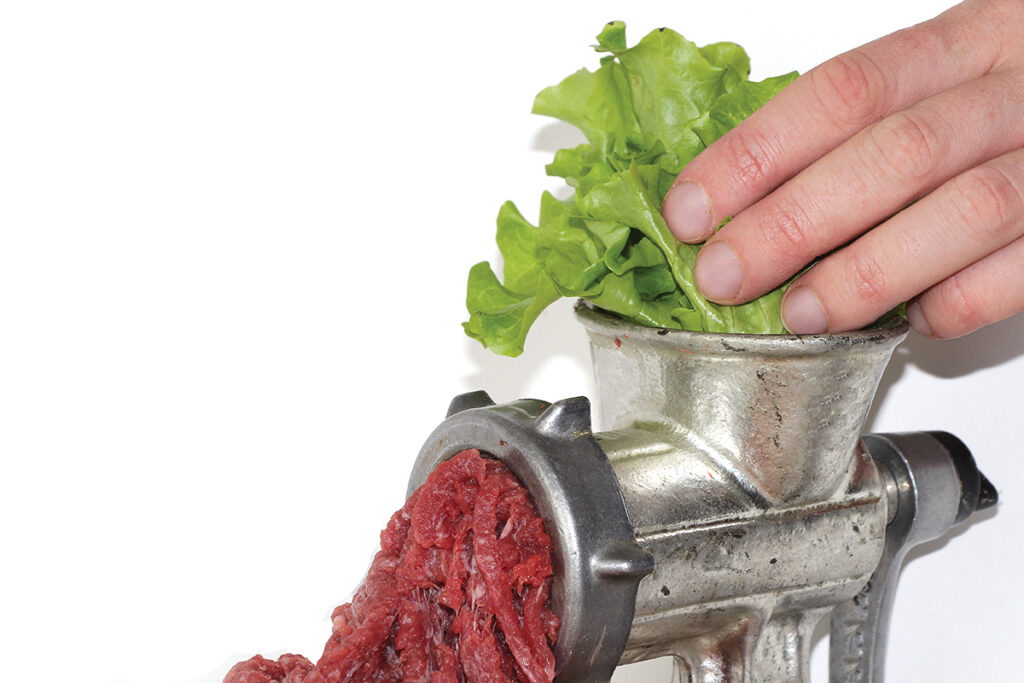 The United States has gotten pretty good at raising cattle — our breeds are generally larger and produce higher-quality meat. Yet, the total number of cattle in the U.S. has dropped by almost 70 million since the 1970s even as our consumption has increased. Those are still some shockingly large numbers, especially when you begin to factor in the staggering amounts of plastic and styrofoam used to package, present and sell cuts of meat to consumers, along with the fuel involved with transporting it all. Even sadder is the fact that Americans waste about one-third of their food, and while the meat may decay organically in the landfill, the wrapping does not.

What about meatless meat? How does it fit into this?

There is a big reason that meatless meat has taken so long to share a similar texture and taste to meat, and it’s because of a dreaded three-letter acronym: GMO.

GMOs, or genetically modified organisms, are in the same boat as meat production when it comes to large-scale misinformation campaigns waged by some of the wealthiest producers in the world. Some would have you believe that GMOs cause cancer and mind control, while others think they’re the bee’s knees. I’ll let you debate the ethics of genetically modifying our food (a practice we’ve been doing since we first put till to soil). I’m just here to tell you what we’re doing and how we’re doing it.

The current leader in the meatless meat industry is Impossible Foods, a meeting of the food and technology industries. You’ve probably heard a number of things about Impossible Meat: that it’s re-cooked and congealed vegetable oil, that it’s some specially-manufactured beet or even that it’s really Soylent Green. It’s actually the product of modified yeast.

The core of what makes a hamburger smell, taste and feel good is a molecule called heme. Heme can be found in your blood cells as hemoglobin and it’s responsible for oxygenating your blood and keeping your whole body working. It turns out plants also produce heme, but it’s very difficult to extract in large quantities. Scientists instead took the genetic coding in soy roots, which produces heme naturally, and applied it to a type of yeast called Pichia pastoris. They fed the yeast sugar, which then produced the heme that would really drive home that juicy, bloody, meaty flavor. To replicate the texture, they use soy and potato proteins to keep it gluten-free, as well as coconut with the flavor extracted.

If you’re considering trying this out using your parent’s chemistry set from the ’70s, don’t — those things are wildly dangerous and this would be extremely difficult to replicate safely outside of a laboratory setting. Professionals are capable of producing meat using 1/20th of the land required, as well as producing 1/8th of the carbon emission a cow does for the same amount of food.

As land becomes a nearly unattainable premium in our near future, we may start seeing more scientifically-enhanced foods popping up to replace America’s favorite belching ungulates.