Monarch School closing leaves some with more questions than answers

It was a regular Tuesday morning when Jamie Jones, the former academic director at the Monarch School in Heron, Montana, found out she’d be losing her job of 12 years.

Patrick McKenna, the school’s founder and owner, informed Jones on Sept. 12 that the school would be closing. 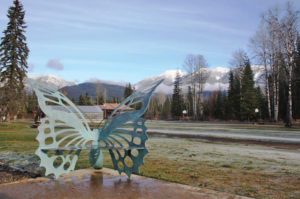 A view of Monarch School’s campus from the porch of the main lodge, with a sculpture of its namesake in the foreground. Photo from Facebook.

The Monarch School, started in 2000, is a therapeutic boarding school and “college preparatory school designed to promote academic excellence, positive self image, strong character traits and sound reasoning,” according to the school’s Facebook page. The school’s website has since been taken down.

Jones said that students reacted to the news with both anger and sadness, some acting out and breaking rules with the attitude of, “What are you going to do about it?”

In a meeting Wednesday morning, Sept. 13, McKenna broke the news to the rest of the staff. In a breaking news announcement on a website called Struggling Teens, McKenna and his wife, Michelle, cited low attendance numbers as the reason for the school’s closure.

“We can no longer sustain the number of students we need to continue our work,” the announcement reads. “It has been an honor being a part of the therapeutic world and we wish nothing but success to all of the other programs out there whose owners and staff work tirelessly to help students and their families.”

In the weeks to follow, Jones said former employees have been job searching, and in some cases where the families lived on campus, rental searching.

McKenna told employees he had been considering closing Monarch for a year. Jones said she can’t shake the feeling that the decision to close the school was abrupt.

“Was he really planning to close the school for a year?” Jones said, mentioning she’d hired a new math teacher just three weeks before the announcement. “If you’d known this was going to happen why would you have let me do that?”

And for many employees, a point of contention with the McKennas is a verbal agreement they have yet to see through: severance pay. More than 20 employees in the Sept. 13 meeting said that they were promised the paycheck for the current pay period, compensation for their vacation and sick time and “two weeks severance” if they worked their regular shifts through Friday, said Jones. Jones said she has received everything but the severance. She said some employees have reached out to her saying they were shorted on their paychecks.

Jones said some staff expressed desire to seek legal action for what they see as shortcomings on the McKenna’s part.

In response to these allegations, McKenna said: “All I can say is that there are a handful of disgruntled staff that are creating a smear campaign against us. The majority of our employees are grateful for the years of employment and opportunity they were provided. And like us, very sad we couldn’t keep Monarch going.”

“This isn’t about revenge for me,” Jones said. “It’s about taking care of my people. As a director of the school, I still feel an obligation to them. (My husband) and I can live without the money, but we have a couple who’s currently homeless and staying with friends. I would like to see Patrick and Michelle showing the same care about people.”

Former assistant admissions director Dawn Bristol worked closely with the McKennas and said she harbors no ill feelings toward them.

“The closing of a business could happen to anyone. We’ve seen it over the years,” Bristol said. “What we do after that moment is up to us. I hope it’s a healthy choice. You can sulk, desire some kind of revenge and think, ‘they owe me,’ or you can move forward.”

She said she was just as surprised by the school’s closure as everyone else. She said she isn’t concerned about the severance issue because she believes she interpreted the situation differently.

“The word ‘severance’ was never used in my conversations, the word severance is something staff started using. Patrick said if he could, he would compensate us by the Oct. 5 payday,” Bristol said.

She said she understands people are hurt and struggling, and she hopes the best for them.

“The natural reaction to something like this is, ‘Why?’ We may never know exactly why it all happened so suddenly, but we need to move forward,” Bristol said.

Others, like Mike Cochran and his wife, find themselves starting over completely after both losing their jobs at Monarch. They also lived on campus and said they were told they had two weeks to move out after the school closed. Cochran said they have yet to receive their $2,000 housing deposit back.

“Both of us lost our jobs in a two-minute announcement, and then it took poking and prodding to find out we wouldn’t get severance,” he said, referencing an email one of the therapist’s wives sent to McKenna asking about severance to which he responded they wouldn’t be paying it. “All the time the talk was about community and integrity, and then 17 years of that went out the window.”

But for Jesus Quintero, who taught theater at Monarch School, that sense of community is why he’s grateful to the McKennas in spite of the abrupt closure. When he and wife Carolina Sa, who also worked at the Monarch School, moved to the Northwest from Miami in search of a better environment for their kids, the school staff was there to bring them into the family. Since then, the family has become a key part of local theater productions and community life.

While the announcement that the school was closing came as a shock to many — Quintero included — he is looking to the future treasuring the experiences and relationships he built over years working at Monarch.

“I think the conversation at Monarch should be … the business failed, but the sense of community prevailed,” he said.

As of now, Jones said all of the former Monarch employees are working hard to be there for one another in what was a jolting life change.

“We are still very involved with helping each other,” life skills teacher Ross Davis said, noting he had a hard time asking people for help prior to meeting his co-workers at Monarch School. “I think that doesn’t have to die with the school.”