With rifles in hand and grey clouds all around, my husband Alex and I spent the rainy opening day of rifle season 2021 scaling a favorite ridge in search of elk.

Just after daylight, we reached an open bench where we typically enjoy a short break — a rocky bluff which affords a spectacular view of Lake Pend Oreille from above Hope, stretching from the Clark Fork Drift Yard to Pack River; the headlights of Highway 200 travelers appearing on this particular morning as small, luminescent dots in the intermittent fog.

As we stood in the opening, chests heaving, a stiff wind came from the southeast. I turned to Alex as he opened his arms to the lake, red-and-black-checked wool coat stretched to its limit, his eyes closed and smile wide as the rain pelted him. I did the same, letting the gust stifle my breathing and the water run down my face. The mental toll of the extremely hot summer we just endured, combined with the physical toll of the hike, made the rain a welcome friend. 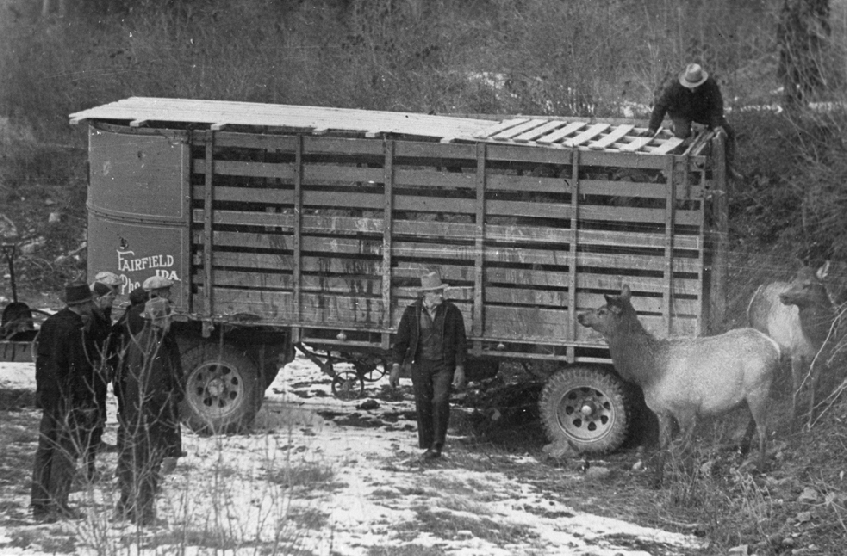 Yellowstone elk are unloaded from a cattle car near Hope in the 1930s. Photo courtesy of the Bonner County History Museum.

It is unclear whether hunters felt the same 72 years ago on the opening day of Bonner County’s first-ever elk season. News articles from the time recount the day — Oct. 5, 1949 — as wet and cold.

“Low hanging clouds and steady rainfall marked the opening of the first elk season in Bonner County Wednesday morning, hardly the kind of weather to hunt any kind of animals in,” the Sandpoint News Bulletin reported. “When the clouds lifted for a time around midday, it disclosed a white blanket on all of the mountains surrounding Lake Pend Oreille.

“A long distance telephone call to Mrs. E.M. Butler at Hope late Wednesday afternoon elicited the information that no reports had come in from local residents who had gone out after elk despite the tough weather,” the story continued.

The excitement of Bonner County’s first elk hunting season was a long time in the making. Though elk were indigenious to Idaho, populations north of the Salmon River were “scarce” after 1900, according to historical records. The first mention of a possible remedy appears in a 1912 edition of the Pend Oreille Review, in an article recounting the minutes of the Sandpoint Commercial Club.

“Dr. C.P. Stackhouse brought before the club the advisability of securing from Yellowstone National Park a carload or more of elk to be set at liberty in the neighboring ranges,” the Review reported. “He said elk could be secured for $7 a head … and the government was anxious to sell them at that figure because the park was becoming overrun with them and they were starving to death in large numbers.”

Stackhouse’s proposal came to fruition in February 1935, as the first of three cattle carloads of elk arrived from Gardiner, Mont., and was unloaded in the Trestle Creek area of Hope — an effort spearheaded by the Bonner County Sportsman’s Association.

“The services of half a dozen men on horses, together with a dozen or so on skis and snowshoes will be needed to herd the elk to their winter range,” the Daily Bulletin reported.

In February 1936, the second shipment arrived, and a North Idaho News headline reveals that “Several Carloads of Sandpoint People” traveled to see the unloading.

The Daily Bulletin detailed that of the 15 cows and five bulls transported, two died during the 560-mile journey — a “below average” fatality rate for such an undertaking, according to the driver, who was scheduled to drive two truckloads into the mountains near Wallace in the following days.

“All elk were ear-tagged by the biological survey,” the Bulletin shared, “and Ross Hall, president of the sportsman’s association, said the animals were in fine condition, much better than the herd released last year in the same area.”

Of the 18 elk who survived that trip, all but one made their way uphill upon release. One bull, according to the Bulletin, “went down the hill, across the Northern Pacific tracks to the edge of the water and jumped in,” swimming a mile to Warren Island. 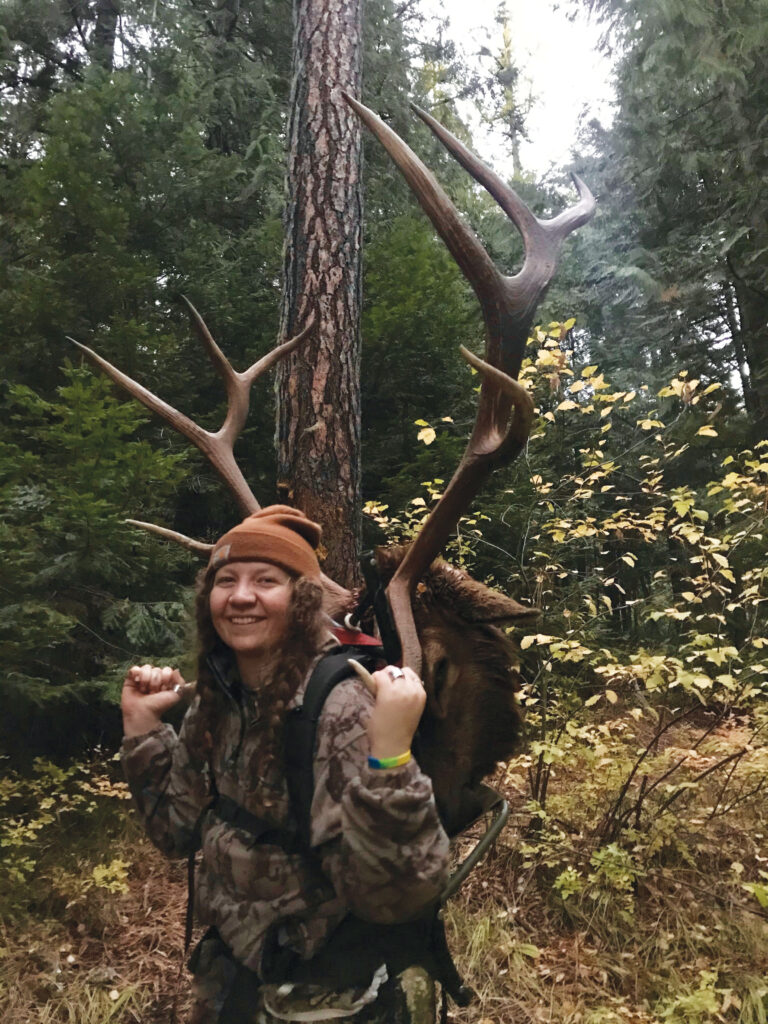 Leslie Kiebert packs the head and antlers of her 2021 harvest on her shoulders. Photo by Lyndsie Kiebert-Carey.

Three transplants took place during the years 1935-1937. It was estimated that of the 66 animals brought to Hope from Yellowstone, 55 survived and were able to establish herds in the area. The county saw its first elk season 12 years later.

Around 140 elk were killed in 1949, many of those harvests detailed in the Sandpoint News Bulletin. It is there that I found many surnames that have persisted throughout my lifetime of Hope residency: Bud McChesney bagged a bull, Lee Decker a cow. Mrs. Fred Van Stone — a huntress, it appears, which brought much joy to this fellow huntress’ heart — is reported to have harvested herself a bull in 1949.

Among the recognizable names is my own: Coe Kiebert, my great-great uncle, also killed a bull during that first season.

The Sandpoint News Bulletin noted in its 1949 end-of-season report that “typical of the rough hunting conditions in the Trestle Creek-Hope area was the experience of Bruce Crabtree, Emery Laude and Wilbur Chandler, all of Sandpoint” — two of them harvesting bulls on opening day.

“They dragged the heavy animals part way on the snow, then came back for help,” the story goes. “They brought a horse, slashed a trail and finally got the two animals out to their truck at 3 p.m. Sunday afternoon. Crabtree said, ‘I think we have earned every ounce of meat we got on this trip. I’m glad elk hunting only comes once a year.’”

Crabtree’s sentiment perfectly encapsulates the gratitude and weariness after a successful hunt — a feeling that persists seven decades later.

As Alex and I continued up the ridge, we came across a grouping of elk beds. I placed my hand in the dirt, discovering only the top layer of duff held moisture. Elk had laid there in the rain until very recently, likely spooked by our approach.

A crashing sound in the brush below confirmed our suspicions. We readied our rifles; but, based on the noise, knew the animals were moving away from us. Our eyes scanned the brush in the canyon until — boom! — a gunshot sounded from below, near where my sister and dad were waiting.

A text message confirmed the successful hunt much faster than a long-distance call to Mrs. Butler ever would have: “Thanks Alex and Lyndsie!” My sister killed her first bull, and the real work began.