Mad About Science: Lord of the Rings

You know, I’ve always thought Ben did a great job in naming this article. 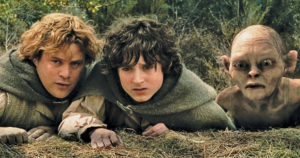 Those guys who saved Middle-earth.

Full disclaimer to the students of 7B: before you plagiarize this article, make sure your teacher doesn’t have a copy of the Reader on their desk!

You wouldn’t think of science when you think of “The Lord of the Rings,”  with its magic and orcs and Gimli-tossing. But there are actually some neat scientific fields that were either inspired by or forecasted by J.R.R. Tolkien decades before they would ever become a thing.

First and foremost, one could argue that “The Lord of the Rings” has one major theme at its heart: conservationism. I mean, the trees literally get up and start whoopin’ orc booty when Saruman oversteps and starts to tear down the forests. Tolkien was notoriously anti-industrialist, especially later in life, and with good reason. He was a veteran of World War I. He witnessed first hand the carnage wrought by technology humans didn’t understand how to control. He lived through World War II, humankind’s tragic mulligan at trying to harness absolute destruction with mechanical efficiency.

While I would argue that his hatred for industrialization was somewhat misplaced, it’s easy to see his point. Industrialization has gotten us into the quagmire we’re in now, and now we’re not sure we can return the world to a Shire-like state in time before everything looks like Mordor.

At the same time, it wasn’t just a 900-page ragetweet at industrialization. It was also commentary on human ambition and power. The One Ring symbolizes power: no matter what your intentions are, be they noble or selfish, an end will always have a means. And the means will tear away what makes us human. The characters that survived relatively unscathed were those that rejected the notion of trading any part of themselves for power.

How is that relevant to us?

How much of yourself do you sacrifice when trying to raise your ‘gram followers over that magical 1M? Is it really you posting those glam selfies, or just the person you know people want to see?

Religion was also a major theme of the book series, and it’s something I don’t often touch on in Mad About Science/Brenden Writes Bad Book Reports. Science and religion have had a notoriously difficult time finding common ground (thanks, Galileo! Seriously, read about his story at the library). It’s also something that I feel is a very personal thing to each individual person. After being told I’m going to hell after so many times, you have to forgive me if I just stop talking about it in public.

That said, “The Lord of the Rings” touches on it masterfully, personally and almost ethereally.

The genius about how Tolkien portrayed his belief and his faith was that he didn’t cram it down your throat. He gave you examples, he showed you how characters would betray those examples and what would happen to them when they did, but he never forced it upon you.

There was an ironic twist to this approach. It inspired C.S. Lewis to write “The Chronicles of Narnia,” which Tolkien later chastised for being too forceful and direct with its symbolism.

Tolkien has also been scrutinized in a way similar to other authors of the 20th century. Some would argue that “The Lord of the Rings” has racist elements in it; humans are good and orcs are bad, for example. I don’t believe this. I see it as a conflict of two natures that coexist in humanity: flawed but ultimately good people trying to survive versus a force intent on destroy everything in its way. The Nazgul weren’t a race — they were men that gave up their humanity and became destroyers of everything. Well, except for Nazgullio, who recorded the smash hits “Dark Lord’s Paradise” and “Baggins, Shire.”

As Tolkien was a veteran of one of the most destructive and senseless wars in the history of mankind, it’s understandable that he might have a perspective we don’t have; not on race, but on what makes people do terrible things for reasons that aren’t their own.

In some ways, you could argue that “The Lord of the Rings” was allegorical to World War I and World War II as a whole.

Actually, that’s an interpretation some have made and Tolkien refuted. But that’s the beauty of the story.

There is no real wrong or right answer, it’s all about what you want to believe.

Aw, man. I ran out of words before I could talk about “The Fellowship of the Ring,” better known as “400 Pages of Tom Bombadil’s House”.

You know where you can check the books out. See you in the Shire.

Tags: brenden bobbyJ.R.R. Tolkienmad about scienceThe Lord of the Rings