It’s not difficult to figure out which country the Reader traveled to, based on these photos. And if you know your animals, you may also be able to identify which Australian state Mark Cochran and Cricket Windsong visited. Yep! Mark’s close encounter with a Tasmanian devil gives it away. 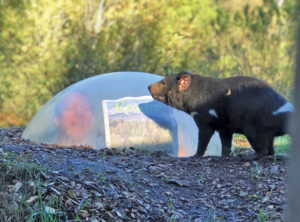 Cricket is seen feeding another animal found only in Tasmania: a Tasmanian forester kangaroo, a sub species to the eastern gray kangaroo found on Australia’s mainland. The main difference between the two is the skull size. Even then, there is only 1% difference in the DNA between the two kangaroos.

Although some are lucky to see these in the wild, Cricket and Mark saw these specific animals — and many more — at the Tasmanian Devil Unzoo, located on the stunning Tasman Peninsula, 5.5 miles from Port Arthur. The Unzoo promotes natural habitats for their special animal guests, and their mission is two-fold. The first is to study animals in as close to their native habitat as possible in order to glean info that would help humans learn how to best protect them in the wildlife. The second is to educate the public and to give visitors a chance to observe animals in their natural habitat and interact with them, when possible.

Tasmanian devils are the world’s largest carnivorous marsupials. Although typical life spans are 3-5 years, some live up to a ripe age of 8 years in the wild. Due to their poor eyesight in daylight, these nocturnal animals are quite active at night and sleep during the day. They are primarily forest scavengers, similar to America’s vultures, in that they eat anything dead lying around. With their magnificent jaws, they can devour all parts of a carcass, thus leaving the surrounding ‘meal’ area pristine. Tasmanian Devils can travel up to 10 miles a day for food and will eat live prey when the need arises: mostly marsupials such as wombats, bettongs (rat- kangaroo) and potoroos (kangaroo-like marsupial the size of a rabbit), that are rich in fat.

Marsupials are mammals that carry their young in a pouch, with the most well-known being the kangaroo species. But what is unique about Tasmanian devils is, instead of the pouch opening facing towards the mother’s face as found with kangaroo moms, their pouch faces in the opposite direction towards the tail. This helps them protect their young from forest debris the moms could easily collect if they had forward facing pouches, due to their close proximity to the ground.

Their screeching sound when Tasmanian devils interact with one another or when they feel threatened most likely encouraged their ‘devilish’ name. And because they are nocturnal, you can just imagine how those initial screeching sounds, especially when heard at night, would induce fear and ignite people’s wildest imaginations. But they truly do not hunt humans and are not to be feared.

When one family member recently asked Cricket and Mark what they genuinely thought about the ‘devils’, they both replied in unison, “They’re so cute!” And if you get a chance to see them in person, you might agree!