We all know that blue whales are big, but are they the biggest? They’re the biggest marine mammals in the world, and possibly even the most massive animal to have ever lived on Earth, but how big are we talking? 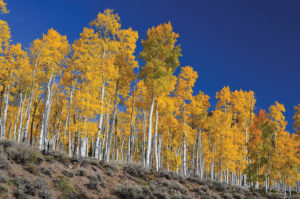 The largest blue whale ever recorded came in at a whopping 190 tons, or around 400,000 pounds. If Eddie Hall, the world record holder for the heaviest deadlift at 1,150 pounds, tried to lift a blue whale, he’d need 348 friends that could tie his record to perform this feat. Just envision how much muscle is needed to push these magnificent creatures through the ocean, or how much air a blue whale needs to retain in its body to remain buoyant.

These are mind-boggling numbers that could make any mathematician’s head spin, but they’re pretty small when talking about the mass of organisms in general.

While the blue whale is the most massive vertebrate mammal, it’s not the most massive or even the largest or longest organism on Earth. You don’t think about it until it comes crashing down on your brand new sedan, but trees are extremely heavy. The towering bull pines surrounding our lake range anywhere from 10 to 50 tons, but there are titans far heavier to the south. The giant sequoia trees of the Sierra mountain range in California earned their moniker of “big trees,” with the largest of them believed to weigh close to 2,300 tons — that’s 4.6 million pounds, or about 12 of the largest blue whales in the world.

At such weights, it becomes easier to compare these things to non-organic structures, like Christ the Redeemer, the 700-ton statue in Rio de Janeiro, Brazil. It would take 3.25 of these statues to match the weight of General Sherman, the largest of the Sierran Redwoods. That’s pretty amazing when you consider that one of them is a concrete statue and the other is a tree made up of innumerable living cells.

General Sherman is a beast of a plant, but it’s still not the heaviest, or even the largest organism on the planet.

The crown and title of “World’s Heaviest Organism” is in hot contention, because of the difficulty in weighing something so incredibly huge. “Yo mama” jokes aside, the two contendors for the title of world’s heaviest are Pando, the clonal colony of quaking aspen in Fishlake National Forest in Utah, and the fungal mats of Oregon.

In this corner, we have Pando, the trembling giant. At a glance, Pando just looks like a forest of quaking aspen trees, but it was discovered that these trees are clones of the same tree — linked by a massive singular underground root network that encompasses about 106 acres of land. Pando is not only in the running for heaviest organism on the planet, but is also one of the oldest, believed to be at least 80,000 years old.

Pando was believed to have thrived during and before the last glacial period of the ice age, but has struggled for the past 10,000 years. Adapting to difficult living conditions and a lack of suitable mates, it creates clones of itself by shooting suckers out from subterranean roots that grow to form more trees. You can see this process happen in most deciduous trees, especially trees you buy from nurseries that have been grafted to the root stock of a different tree.

It’s like those horror movies in which someone gets an organ transplant from a serial killer, and then that organ tries to kill people, or whatever murderous spleens try to do. Most important to the subject of this article, Pando is estimated to weigh around 6,600 tons, which is about as much as 3,500 sedans.

In the other corner, we have Armillaria ostoyae, the humongous fungus hailing from the Malheur National Forest in Oregon. A. ostoyae is a parasitic mushroom with a vast underground root system that is believed to span 2,240 acres and weigh as much as 35,000 tons; that’s about 2.5 times the weight of the Brooklyn Bridge. This fungus can be crippling to coniferous forests and is notorious for being extremely resilient. The fungus can remain dormant in the stump of a fallen tree for as long as half a century, until favorable conditions arise. Some colonies are believed to be more than 2,000 years old.

While it appears that we have a clear winner in the battle of the bulk, it’s almost impossible to definitively prove the weight of either of these titans. Given their sheer size and their constant cycles of growth and death, all we can do is postulate averages and make our best guess as to how much they might weigh.

Before I wrap this article up, I wanted to say thanks to Reader staff writer Lyndsie Kiebert, who suggested I write an article on Pando that sent me down this massive rabbit hole. Lucky for me, we have very patient librarians willing to indulge in my endless salvo of strange research questions every week. Stay curious, 7B.