An interview with: Mitchell Tenpenny

When up-and-coming country artist Mitchell Tenpenny visits Sandpoint Aug. 5 to open for Jake Owen, concert attendees are sure to walk away with memories of a unique songwriter. One of those memories will likely be soundtracked by his upbeat breakup anthem “Bitches.” 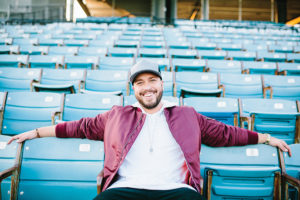 “It’s not about calling girls bitches, or guys — it’s just a term. I wrote that song when my buddies got cheated on, and it was the only term that came to mind. It’s become a girl anthem, too. Like, we all know bitches. That’s why I wanted to make it up-tempo,” he said. “People are always singing by the second chorus cause it’s just easy, and it’s kind of a shock to be like, ‘Why am I singing (the word) ‘bitches?’”

Tenpenny, who has previously opened for Granger Smith, Brett Young and Lynyrd Skynyrd, started Riser Records in Nashville. He said the goal was to make a team that believed in creating a unique country sound with real stories and real people behind it. The result of this vision, he said, is he recently released EP, “Linden Ave.”

“We’ve been just trying to organically build the brand the best that we can,” Tenpenny said. “I think there’s a lot of real emotion in these songs. It’s less of the ‘moonlight, taillight’ thing and more like ‘I get too drunk and call my ex’ type stuff. More stuff that some people on a major label might not be able to say.”

Tenpenny grew up in the Nashville music scene and said he saw the evolution of current country music thanks to his grandmother’s position as president of Sony ATV Music Publishing. Being around the business his entire life helped him find what he calls an “untapped market” in the genre: authenticity.

“I’m not saying the other artists aren’t authentic, but I just think there are certain things that even when you have the formula people don’t want to take the risk, and that’s why we wanted to start our own label, where maybe we were able to say something that someone else hasn’t said yet,” Tenpenny said.

Taking risks and striving for authenticity has to do with relating to a certain demographic, Tenpenny said — specifically, blue-collar people.

“I’ve been lucky enough to travel the country and see that most of it isn’t these big towns. The cities have all the population, but then there’s America that’s just covered with blue-collar, hard-working people, and that’s who I want to write for,” he said. “I understand that sometimes there’s bigger problems than drinking under moonlight. And not necessarily problems — sometimes there’s more fun than just that, too.”

His song “Mixed Drinks” explores the vulnerability that comes with heartbreak, and was inspired by a woman he saw ripping shots and crying over her phone. “Truck I Drove in High School” is about his first truck, and first taste of freedom. “Alcohol You Later” puts into song the drunk dialing that none of us are proud of — but know too well. Tenpenny’s music is meant to resonate with everyone, he said.

“I want you to feel like it’s honest, not just something you can crank up and not necessarily listen to the lyrics,” he said, noting that though he loves the work of many contemporary country artists, they tend to play it safe with their lyrics. “(Popular artists) have great grooves, and sometimes the lyrics dive a little deeper, but the lyrics never really hit on anything offensive or edgy. I want something that evokes an emotion every time you hear it. I’ll lose my voice at the end of a recording session because I want you to believe it. I want you to believe I’ve been through that and that it’s OK.”

Catch Mitchell Tenpenny opening for Jake Owen on Saturday, Aug. 5, at the Festival at Sandpoint at Memorial Field. Call 265-4554 for tickets.