It is difficult to assess a person’s true worth and motives.

There’s no telling if the person asking you out on a date or running for president is a decent human being. They might be campaigning so hard for your vote or love they fail to present an accurate picture of what they are all about. A good candidate for love or presidency should be willing to tell you more about themselves than pointing out all the negative qualities in their competition.

However, sometimes it’s not that easy. Maybe the candidate is very hot, making it impossible for you to pay attention to what they are saying. Maybe their hair is a horrific gravity defying comb-over, or their voice sounds suspiciously like Satan’s whisper, and these qualities alone have you so frozen in fear you can not function let alone make a sound decision. 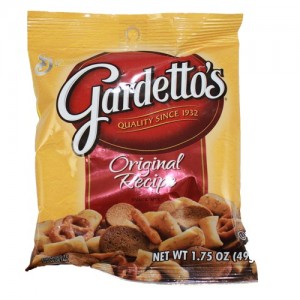 Whatever the case may be, there is only one foolproof way of making a sound decision on the character of another human being. I like to call it the Gardetto Method.

Unfortunately, the ratio of each component of the Gardetto mix is opposite of what one would desire or expect. The more bland and flavorless items make up 75 percent of the bag,  the delicious items make up less than 20 percent and the remaining 5 percent are nearly unidentifiable crumbs. After consuming the snack, you are left wanting more rye chips and typically discarding the sesame logs.

I am sure that America’s landfills are chock full of the discarded sesame logs of yesteryear. If you have consumed Gardetto’s, you know exactly what I am talking about. If you have not, you are likely a person who treats your body to things like gluten-free vegetarian organic kale chips which look exactly like goose shit, but cost about 300 times as much. Gluten-free vegan, you will have to imagine what edible snacks taste like.

Back to the method.

If you find yourself wanting to know what a person’s true character is, share a bag of Gardetto’s with them. Everything you have ever wanted to know about a person can be ascertained in how they split the Gardetto pot.

Do they immediately divide the bag in half? Do they count each item meticulously and then split them accordingly? Do they reach their hand right in the bag and greedily inhale all the rye chips before you even get a chance at one? Do they reach into the bag and attempt to be fair but leave you one and a half rye chips, the crumbs and the petrified logs?

Now ask yourself how do you share your Gardetto’s?

Hopefully, you can look at yourself in the eye, and answer with honesty. If you are a rye chip hoarder, or justify your rye chip consumption by saying things like, “I technically paid more,” or “I deserve the rye chips more than my companion does,” maybe you need to take a long look at your life choices.

If you would rather just give the other person all the delicious rye chips and avoid an argument or awkward interaction, you are passive and probably the type of person who refuses to say what they want to do on a Friday night. You are annoying, and the first step to fixing this is advocate for your equal share of the Gardetto mix. The Gardetto Method is also an effective tool for self-reflection.

How does this relate to presidential elections? I can’t just split the bag with Donald Trump, after all. In cases where the object of your concern is not someone who you could casually split a snack food item with, you will have to make an educated guess on their sharing habits based on what you know about them. Example:

Donald Trump: I feel he would be the kind of person who already has several bags of the rye chips in the same area as he keeps his bags of extra money and misguided hatred. He would likely be opposed to sharing food with a commoner, but when push came to shove, I think he would divide the bag according to who paid more for it. May not be kind, but it is logical.

Hillary Clinton: I think that Hillary would count every crumb and piece in the bag, painstakingly organizing and assessing them by weight and calorie content, so that the distribution was based on her factual assessment rather than by deliciousness. She would take it upon herself to distribute the snack commodity, even if you were the person who paid for them.

Bernie Sanders: He would make it rain with Gardetto’s. He would literally fly around in a hot air balloon distributing the Gardetto’s to everyone throughout the land. He would acquire mass quantities of Gardetto’s because people would be willing to donate them to his cause. Come on, who doesn’t want to experience Gardetto rain?

That is my understanding of our presidential candidates based on the Gardetto Method.

Feel free to make your own assessments.

I hope you find the one that you would give your last rye chip to.