County has eyes on roads as spring breakup starts

It appears the worst of winter is over, and as the snow makes its way into our water system, spring breakup threatens roads all over Bonner County.

Director of Bonner County Road and Bridge Steve Klatt said the county’s approach during spring breakup is one of prevention. 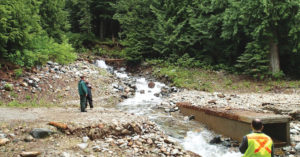 A washout along Lightning Creek Road as photographed in May 2016. Photo courtesy USFS.

“Our intention is to get roads closed before a real breakup happens, and we appear to have successfully accomplished that this year,” he said.

Klatt said crews have worked hard to get snow berms pushed back from road edges to expedite thawing. The sooner roads thaw, he said, the sooner they dry out.

Klatt noted that this winter’s freezing cycles are “problematic,” making it more difficult to in get layers of frost and moisture driven down into the roads.

“Similar winter cycles have given us some of the worst mud events, historically,” he said.

To combat such mud events happening this year, Klatt said Road and Bridge crews patrol roads to make sure all culverts and drain lines are not clogged with debris. Klatt said there are no county roads currently at high risk, but that can change quickly.

“There are no roads known to be especially vulnerable at this particular moment, but that can change dynamically in 24 hours should a major rain event roll down the mountainsides,” he said.

Klatt said there is currently only one county road closed due to spring breakup. Eastriver Road, north of Priest River, is closed due to a soil slump under the edge of the roadbed.

“We had a similar slump last year because of the super saturated soils and we’re watching closely for a re-occurrence,” he said. “We will make stabilization repairs after snow, frost and weight limits have run their course for this winter.”

Weight limits are currently in effect on all county roads, with specific limits posted in specific areas. Early morning hauling is not allowed on any county roads right now.