Laddies of the Day, revisited

“Be careful what you wish for” thought Ben Franklin as he flew his kite into a hot overhead electric line.Thought Julius Caesar over the Cobb salad he certainly hadn’t ordered. Thought Donald Trump to a stiff-armed salute from admirers who dig him because he speaks his mind but which reminded older, higher minds of an evil orator from another era. Thought this scribe, who in a past Reader set out to personally research Sandpoint’s sporting Ladies Of The Evening, if any.

After my 1957 bride objected, the theme shifted to the city’s ebullient Ladies Of The Day. Two columns, and ladies enoyed them. But laddies, charging the Reader with gender bias, rose in fierce objection. They burned tires, shouted obscene anti-Reader sound bites, and tossed smoke bombs at this cowed journalist, hiding in the library lobby. They demanded parity. Equal Reader ink.

Early next morning I wrote about several leading laddies, then repaired, exhausted, to the lip-smackin’ new Flourish cafe for a squash sandwich. I considered Laddies a done deal. But when they didn’t find their names in the piece, thousands of scowling, vindictive laddies thundered down First Avenue, shouting “Hell no, we won’t go!” (Curious, but the only pithy chant they could recall from the 1960s and ‘70s).

Rounding the corner onto Cedar, they brutally attacked the Reader door with a battering ram. A battering ram featuring our own intrepid explorer, David Thompson. Heroically, he had taped himself to the battering end of the battering ram. Ever since Thompson was queried in a recent Reader for his opinions on the academy awards he has sought celebrity. This was his carpe diem. Duct taping and duck taping himself to the battering ram was not really all that heroic, however. I mean, David Thompson is a cement sculpture. And the Reader’s door was not even locked. Roaring mobs of seething laddies never think of such things though. Where is the machismo, the bravado, if one strolls through an unlocked door when determined to trash a place. Better to ram it first with a cement David Thompson.

Sensitive to such uncivil behavior, Ben and Cameron, trembling, hung a white flag from their upstairs window and promised a laddies encore. Just like the ladies got. As it happens, this terrorized author was also hunkered beneath a massive upstairs desk. But not before recognizing the rioting ringleaders.

Jessie, the burley, jovial Arlo’s waiter—and world traveler  whenever he saves up sufficient funds—was there. Son of Arlo’s owners, Jessie was reared in gentle Greenwich Village, New York City. Historic, cobble-stoned home to poets, musicians, actors, thinkers. My 1957 bride and I began legally co-habitating in a walkup brownstone there after a year of frisky, pre-nuptial mid-50s sports car romance from one end of California’s Pacific Coast Highway to the other. Including, as Simon & Garfunkle sang, “…down from Berkeley to Carmel…” 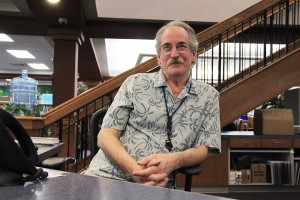 Gordon Anderson at the Sandpoint Library. Photo by Ben Olson.

At Jessie’s side was husky Ryan Navarro, in a Georgia Bulldogs sweatshirt. Ryan is 19 and one of the heavy lifters out at Carter Country. Ryan has never been to Georgia but has cheered for the University of Georgia football teams as long as he can remember. Purchasing fencing from Ryan one morning, and learning of his love for Dixieland, I lustily sang “Glory, Glory To Old Georgia…g.e.o.r.g.i.a.” He seemed unimpressed. That may be why he joined the riotous mob.

Next to Ryan marched musician Paul Gunter, a really big dude. One wouldn’t think school music teachers would involve themselves in violent uprisings. Yet Paul hoisted a bullhorn and bellowed at the Reader windows, “You guys suck!” Brave Cameron replied in kind: “We’re rubber you’re glue. Everything you say bounces off us and sticks onto you!” Infuriated, Gunter fired back, “Liar, liar, pants on fire!” It was ugly.

Flanking the front line of marchers, like a pair of lanky NFL wide receivers, were Don, extra-genial host at the Pend d’ Orielle Winery, and longtime library key manager Gordon. Both are nine feet tall. Don is the sort of restauranteur who makes customers want to linger. He was dragging a cart full of Bistro Rouge, his excellent house specialty, down the street. Always the host with the most, Don anticipated his rabble-rousing colleagues would be thirsty when their rebellion ended. More importantly, he had a son at Cal-Berkeley, where my bride and I met in 1956. Naturally, we three share a powerful collegial bond. “Oh sturdy Golden Bear…”

Gordon is retiring soon, after 17 years of exemplary library service. Man, will he be missed! Gordon was strumming his guitar as he trudged along Cedar and singing the Civil Rights anthem, “We Shall Overcome” which he apparently considered fitting for the laddies’ quest.  Gordon and wife Joan met at a James Taylor/Carli Simon concert back in the day. When singing on stage during summer Saturdays at the Farmers market they sound a lot like James and Carli. Maybe better.

As the bellowing agitators repeatedly rammed Cement David into the Reader door, shaking the building, Baxters customers next door found their plates crashing to the floor. Headman Tommy and affable waiter Nakia dashed into the street, incensed. Mike Roos,  no pipsqueak and new owner of  Nu-Way Wash O Mat, tackled them. (Nu-Way is one of Sandpoint’s many marvelous, friendly, family-owned businesses. The kind of 42-year-old local enterprise we should promote and patronize. Ten happy employees who smile when you enter. One of them, Paul, is the third generation member of his family to work at the laundromat). As Mike took his foot off their necks, laddies Tommy and Nakia recognized a good cause when they stumbled into one. Hippies at heart, they cheerfully joined the protest. This writer was shocked. I knew them both. They’d never acted like anarchists. Well, Nakia hadn’t. 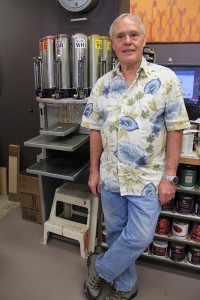 Harold Stephenson from the Paint Bucket. Photo by Ben Olson.

Among the ruffian marchers were at least two gentlemen.  Paint Bucket owner Harold and Limey Solutions proprietor Colin. Born in the north of England, Colin and his bride, Mandi, partner in A Spa At The Lake, have traveled the world. Before finding Sandpoint in 2009 they tramped through India, Australia, Central America, Asia and several other continents and countries. When Colin comes to our house to fix our ailing, ancient computer, he attempts to impress us with tales of world travel. We quickly one-up him by recounting dining adventures in  Bonners Ferry.

Harold is another fellow with everything going for him—a great wife, Liz, a droll wit, a thriving business, an upscale Audi. A few years ago friends Nan Cooper and Maria Larson  painted the front of his Pine Street building with colorful amphibians of every stripe. Frogs, toads, water lillies. Then Harold, in a strong argument for education, ruined it. Trying to discourage non-customer parking, he wrote in large letters across the front of the building, “Unbelonging cars TOAD.”

Tags: laddies of the dayTim Henney