We’ve been conditioned to think that gooey, slimy, sticky things are gross, and it’s true! A slimy surface is usually indicative of a bacterial film growing, and this can only be done in a place that isn’t regularly cleaned and holds all of the perfect conditions for dangerous bacteria to flourish. So what is it about bacteria that gives slime such a nasty texture? Sugar! 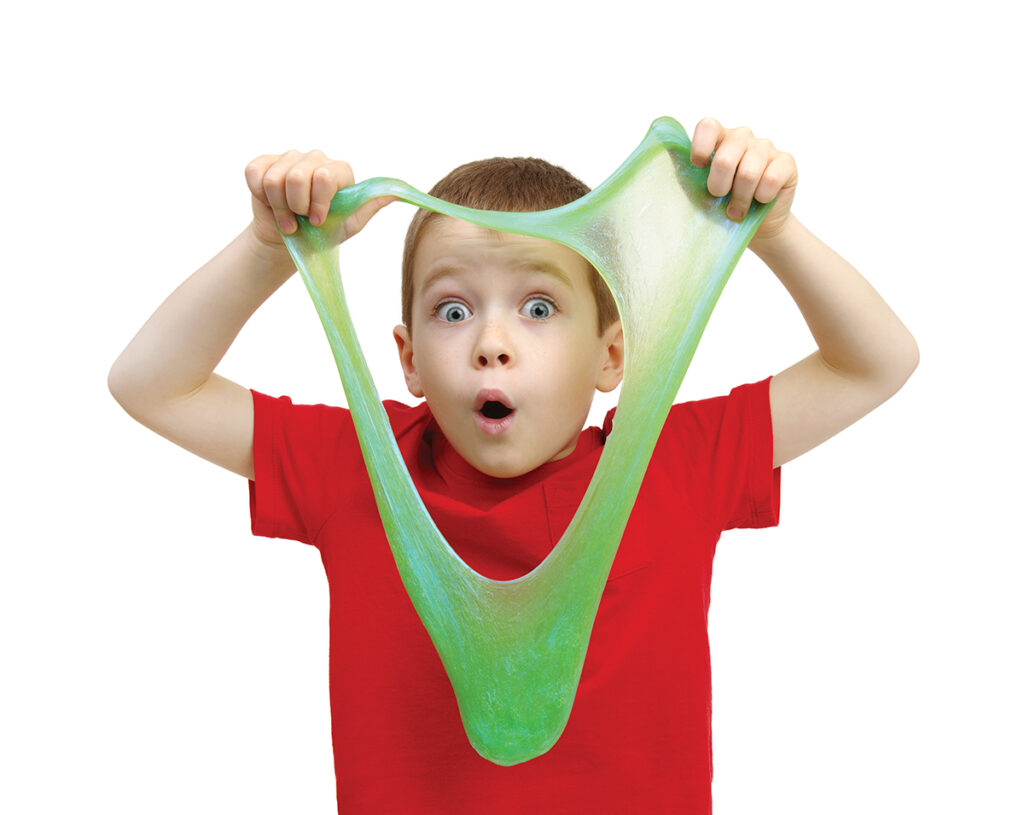 Most bacteria are covered in a substance called glycocalyx, which is a polysaccharide made of organic starches like cellulose or other molecular sugars. This slime wall helps keep water inside the cell while repelling hostile viruses and other substances. You would never feel the sliminess of a singular bacterium, they’re far too small for our nerves to pick up. When there are a lot of bacteria gathered on one spot, you’ll be able to feel their collective slime walls as you touch them.

A slimy form of bacteria you may be familiar with can be readily found in your home if you care for tropical fish. Blue-green algae is a form of cyanobacteria that feasts on nitrogen and phosphates in your aquarium water. Conveniently for the algae, these substances are pooped out by your pet fish and build up over time inside of the tank where they have nowhere to go. Cyanobacteria consume your fish’s waste and uneaten food and use these nutrients to multiply, creating more cyanobacteria. Eventually, you’ll notice your tank is covered in a slimy green substance that is nearly impossible to clean. Transferring your fish to a new home brings the algae along for the ride to continue the cycle until your fish is dead and the water is gone from the tank.

Your aquarium isn’t the only place in which this occurs; this happens naturally in the wild, as well. Freshwater wetlands often have water that’s slimy and tinged with a dark-green hue — this is cyanobacteria at work. It’s easy for algae to take over an entire ecosystem, but many animals adapt to eat algae and use it as an energy source. Invertebrates like crabs, mollusks and even some fish will feed on algae to help keep it in check, while they themselves provide a food source to even larger animals, including humans.

Slimy cyanobacteria have been spreading their goo all over the globe for nearly 2 billion years. Shockingly, cyanobacteria were responsible for the greatest extinction event on Earth. This sounds horrible and traumatic, but it’s the very reason you’re able to exist on the planet today.

Earth’s early atmosphere was nothing like the oxygen-rich one we currently enjoy. It was thin and primarily composed of carbon dioxide, methane and water vapor. This made early Earth a very hot place that would cause water to rapidly evaporate then be split by solar radiation, dividing the oxygen and hydrogen atoms. The oxygen would rapidly bind with the methane, sink back to the surface and bind into minerals at the surface. Across this vast span of time, life on Earth was strictly anaerobic — a word you may have heard if you frequent the gym.

Anaerobic organisms are microbial forms of life that don’t require oxygen to produce energy. These organisms pull nutrients from minerals in a similar fashion to a plants’ roots. Unlike plants, these organisms don’t use photosynthesis, but cyanobacteria do. Cyanobacteria use water and sunlight to split carbon dioxide molecules into carbon and oxygen, then spit out the oxygen as a waste product while retaining the carbon atoms to increase its mass and eventually split.

During the “Great Oxidation Event,” which occurred over the course of about 300 million years, cyanobacteria grew and spread, outcompeting the anaerobic life that had dominated Earth up until that point. Over this period of time, the cyanobacteria critically reformed the makeup of Earth’s atmosphere by flooding it with oxygen and reducing the amount of methane and carbon dioxide. There was so much cyanobacteria that the entire planet’s natural processes couldn’t keep up, and the climate drastically changed. Greenhouse gasses were reduced in this period, while oxygen expanded and repelled heat — this caused the global temperature of Earth to plummet and triggered one of the first major ice ages. In the process, the immense amount of oxygen poisoned the anaerobic organisms and caused a mass extinction event that paved the way for life as we know it to evolve.

What remains of the ancient genocidal cyanobacteria is now largely pumped into your car’s fuel tank, then expelled from the exhaust pipe. The irony here is that we’re using cyanobacteria in reverse to undo the Great Oxidation Event and morphing the climate back into what it had been before the advent of cyanobacteria — conditions we cannot survive.

Now that you’ve envisioned a giant, slime-ridden planet Earth, do you want to make your own slime at home?

Get some white PVA glue like you’d use for a school project, a bowl and some baking soda. Mix a cup of glue together with one tablespoon of baking soda and stir it to your desired consistency. Add some food coloring and glitter, as well as a teaspoon of saline solution for contact lenses. Keep on mixing it until it starts to thicken. Now it’s time to knead your slimy dough. Use both hands to knead it while adding a little bit of saline until you get the consistency that you want. Once you’re done, store it in an airtight container or plastic bag and play with your new goop.

I would not recommend playing with slime in a carpeted area. A table or a place with vinyl laminate is easiest to clean using vinegar, whereas fibrous surfaces like clothes and carpet will make cleaning a nightmarish endeavor.

The slimy, sticky nature of PVA glue is very closely related to the slime walls of bacteria. Glue is starch-based cellulose, very similar in structure to glycocalyx found in bacterial cells. Unlike the slime coating of bacteria, PVA slime is safe to play with — just don’t put it in your mouth. It’s still slime, after all.