“To maximize learning, the kids need to know that you have a relationship with them, and that takes time to develop,” says Jayne Sturm, who is retiring after 37 years of public school teaching.

“Some kids maybe have such an intrinsic yearning for learning that they don’t necessarily need that bond (with their teacher,) but they sure like it,” she said. “That is probably what I am more aware of the more that I have taught, that is not just the kids that are seeking that relationship, but all of them deserve that relationship.” 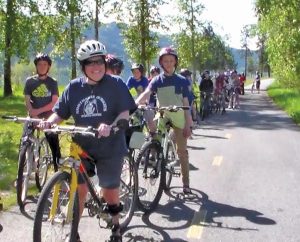 On the first day of school Sturm doesn’t jump in to a curriculum. She plants seeds for news relationships by being vulnerable herself. Unlike many of us whom have hidden our disabilities, Sturm is very open about hers. On the first day she explains to children about her foot and why she needs a brace.

“I am a twin, and when I was born my foot was backwards. With different surgeries and braces they were able to get it turned back straight, but in order to keep it straight they had to fuse it, so it has no movement at all,” said Sturm. “Because it was fused it didn’t grow.”

Sturm wears a size 1, compared to size 5 on her dominant foot.

“So of course I chose P.E. to major in, because why would you not want to be gymnast?” she laughs. “Of course I am the one that wears skirts and shorts all of the time, you know, because braces are so cool.”

By her junior year of high school, Sturm was pursuing her dream of being a P.E. teacher, by student teaching at the K-8 school where she began her schooling in Iowa. In 1977 she began her career at this same primary school, teaching P.E. and health and spearheading an extracurricular performing gymnastics circus.

“I am old enough where title 9 didn’t happen until my senior year, so I was a cheerleader for the four years because that was the sport we could do,” she said. “I remember trying out for cheerleading and my mom really didn’t want me to try out because of my leg and I just begged and begged. I begged and did everything I could so that they had to pick me on the team even though I didn’t have a foot that pointed like my other one … things like: I will learn the splits in all three ways, I will jump the highest and then I will learn the first back-handspring. Me and a girlfriend would sneak up to the wrestling mat room and fall on our heads enough times to learn the tricks. I don’t know what made me so competitive, but maybe it was because things were harder, always.

“I think you are given trials to bring out the best in you,” she said. “I think at all levels obstacles are good for people. Figure out your plan and then you buck up and make things happen.”

In 1990 Sturm began her 27-year stretch as Northside’s sixth-grade teacher.

“I just really like what I do,” she said. “Our district treats you with great respect. Our superintendent is very appreciative of what we do. They model what I hope to model with my students; building relationships. Perky Hagadone (principal of Northside Elementary) probably stops in every classroom every day and has a non-school conversation. One of the things that make Northside so special is that we all know each other. The staff can give each other their joys and sorrows.”

Because she is such a team player, Sturm wanted this article to credit all of the staff at Northside: “The strengths start with the bus,” she said, “and there are certain bus drivers that have an extra bit of love in their hearts that will have a conversation with me about a kid that was having a tough morning, and I will try and find that kid and give them a side hug or a fist bump to make a connection.”

Sturm has had several mentors that have helped her on her journey to be a gifted teacher, inspiring her students to achieve very high national test scores while nurturing their unique personalities and gifts. Her mom was probably the most profound impact upon her style of teaching. In a family of seven children, “I knew from a young age that I mattered. My mom’s modeled unconditional love to a big group of kids, every single one of us feeling really special and that you were really important.”

Some of the programs that Mrs. Sturm has helped spearhead at Northside are the active field trips taken by her 6th grade class, the chess program, geography day, and the cross country ski program. The hallways of Northside look nostalgic as they are lined in cross country skis, boots and poles. On May 23 she hosted the sixth-grade class at her own home to walk and run the trails for a fundraiser for Kinderhaven. Each year her students raise hundreds of dollars and plenty of awareness for Kinderhaven on a field trip to her home.

“When I was in college I worked at a school where the children were a ward to the state, it was a residential school and they didn’t have that belief in them that their presence made a difference,” said Sturm. “Many of them were powerless, and the ones that were not were angry. I believe they were angry because they didn’t know how they could make a difference.

“You can help any student achieve if they know they can make a difference,” she said. “If you don’t have the vision that your life here matters than it starts that whole cave in defeat thing and it can be hard to rise above it. I see that in my students that have some really hard things going on in their personal life. I try to be available to talk, but if they don’t want to talk I try to help lessen their load, to help release their brain to still learn, like picking a game I know that student is good at.”

For such a determined person, this might be somewhat of a pseudo- retirement: “I have to figure out how to channel my energy so I don’t drive my husband crazy. I plan on visiting a lot with my adult kids and grandkids,” she said.

Both of Sturm’s daughters were her students at Northside. One is a family practice doctor near Seattle, and the other is a local teacher.

Mrs. Sturm wants to focus on being open and not planning so much, but “when I have taken a breather I would really like to help in a classroom.”