A citizens group opposed to the relocation of an asphalt batch plant to a gravel pit in Sagle have successfully appealed a District Court decision that would have allowed the project to move forward, with the Idaho Supreme Court determining Interstate Concrete & Asphalt’s conditional use permit for the project — issued by Bonner County — invalid.

“Our group has been confident in our case and trusted Gary Allen, our attorney, regarding the laws and how the county ignored their own ordinances, Bonner County Comp Plan and Title 12,” Jonna Plante, founding member of the Citizens Against Linscott/Interstate Asphalt Plant told the Reader in a March 22 email, adding that the group is “very relieved” that the court determined Bonner County would need to pay its legal fees for the appeal. 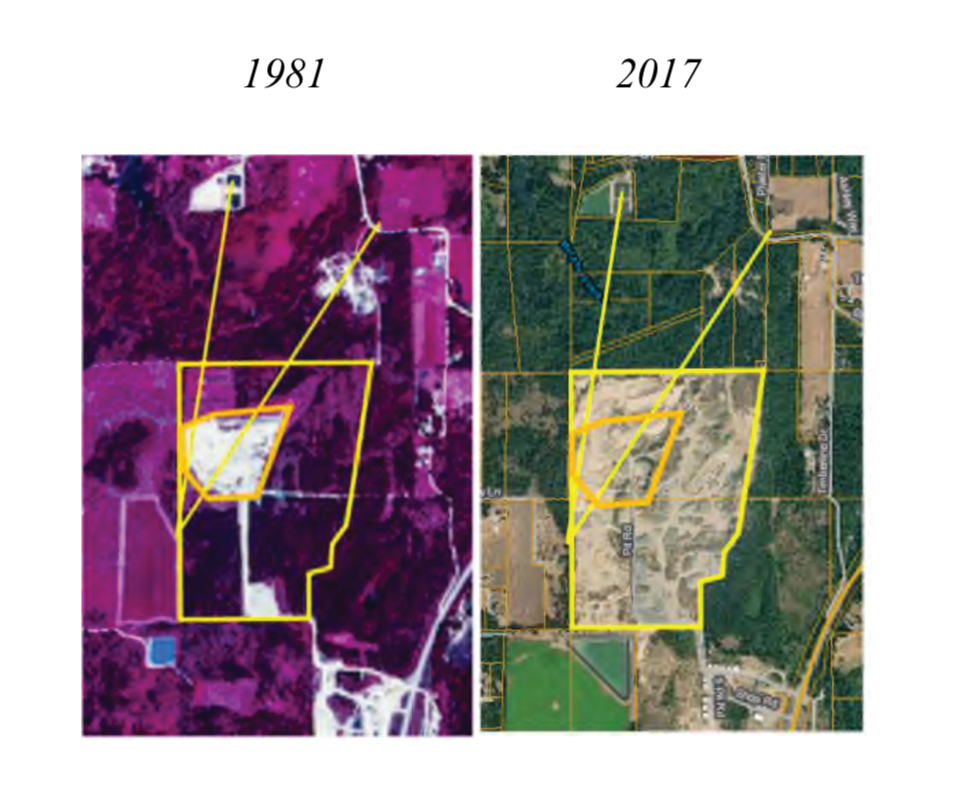 Aerial photos from a legal document showing the expansion of Linscott’s gravel pit since 1981, when it obtained grandfathered rights. The orange lines indicate the border of the pit in 1981, while the yellow border is the pit’s boundaries as of 2017.  Courtesy images.

Bonner County commissioners did not reply to an initial request for comment on the ruling, but Commissioner Dan McDonald did take to a local Facebook forum March 23, commenting on a news article about the decision: “What’s interesting is based on the language in the ruling it appears now every gravel pit in Bonner County is illegal.”

When asked via email to elaborate, McDonald later told the Reader that county legal counsel was “already moving to remedy this so as to not hurt gravel pit operations that are of vital importance to all our county residents.”

“[T]he Court interpreted our nonconforming use statute to say all grandfathered uses, including gravel pits, cannot expand,” he continued in a follow-up email. “Now that works great for all ordinary uses, but all natural resource uses must expand and have been doing so for years, so all the old gravel pits in the County are now illegal according to the courts.”

McDonald went on to state that the county “thought it was extremely irregular that the Court awarded attorney fees but only against the County and did not include Interstate or the Linscotts” after those parties won in the District Court ruling.

“It seemed a bit vindictive and may stem from the fact that we challenged the Governor on the CARES Act disbursement as was originally outlined,” McDonald said, identifying, at the Reader’s request, the party being allegedly “vindictive” toward the county in the Sagle asphalt plant case as “[T]he state Supreme Court.”

“In our opinion it was an odd ruling, especially the award and how it was structured,” he continued. “Do we have proof, of course not, but it was highly irregular in that there were two other parties with us in the suit but only one pays attorney fees.”

Bonner County filed for declaratory judgement against Gov. Brad Little and other state officials in July 2020, alleging discrepancies between the state’s guidelines for distributing pandemic relief funds and federal guidelines. That case has since been settled out of court.

In the asphalt plant suit, the state Supreme Court reversed a portion of the lower court’s decision vital to the relocation of the plant from Sandpoint to Frank and Carol Linscott’s Sagle gravel pit; while the District Court upheld the CUP, the higher court ruled the CUP void. This is due in large part to a separate, simultaneous suit in which the citizens group argued a county code amendment from 2018 — which allowed asphalt batch plants in farming, agriculture/forestry and residential zones with a CUP — was adopted without adequate public notice. Bonner County conceded, the District Court executed a judgement and, in acknowledging that opinion, the Idaho Supreme Court declared Interstate’s CUP invalid, seeing as it depended on the illegally adopted code.

“The County did not satisfy the conditions precedent to exercising its statutory zoning authority,” the court’s decision reads. “Therefore, the Amendment never had any force or effect. Accordingly, the law in existence at the time the Linscotts and Interstate applied for the CUP did not authorize the proposed use and the CUP is invalid.”

The state court also reversed a portion of the District Court decision that gave the county authority to interpet its own code and use discretion “in concluding that it need not consider the Linscotts’ gravel pit’s compliance with nonconforming use ordinances.”

Opponents of the asphalt plant have long argued that the Linscotts have unlawfully expanded their pit.

“We disagree and conclude that the County’s application of its zoning ordinances was arbitrary and capricious,” the new decision reads.

It’s the latest development in the story of the proposed Sagle asphalt plant, which launched in 2018 when Interstate applied for the CUP. Bonner County’s Planning and Zoning Commission recommended approval of the permit in late 2018 and, in early 2019, county commissioners approved it. All the while, neighbors mounted a vigorous campaign against the plant, eventually banding together to file a motion for reconsideration. When the commissioners once again upheld the permit, the citizens group took the county, Interstate and Linscotts to court.

When a judge upheld the CUP, the group appealed — it also brought the illegal adoption of county code as a separate matter, requesting a declaratory judgement in June 2020. The parties settled outside of court in July, with both agreeing that the amendment to county code was, in fact, illegally adopted due to a failure to provide adequate notice before the code change saw a vote.

In voiding the amendment that made Interstate’s CUP possible, the Idaho Supreme Court decision states, the CUP also becomes void.

When contacted for statements on the ruling, both Frank Linscott and legal counsel for Interstate Concrete & Asphalt said they had no comment at this time.