This cold has been no fun! Who wants to work around outside when the wind is blowing and it’s cold enough to give your fingers frostbite in under half an hour? Wouldn’t you rather be beachside somewhere in the tropics with a delicious tropical drink in one hand and a sunburn? 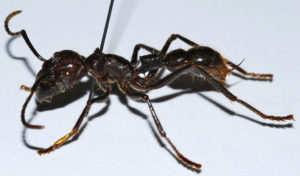 If you think sunburns are the worst you have to worry about in the tropics, I’ve got news for you: The warmest places on the planet also harbor some of the most deadly creatures in the world. By the end of this article, we’ll all feel thankful we’re shivering away in the cold, dark north.

The Amazonian giant centipede: Despite looking like a delicious gummy worm Freddy Krueger just handed you, these nightmarish beasts are capable of scaling vertical surfaces and even hanging upside-down by just a few legs. They do this to devour things like bats. Bats! These giant centipedes are venomous, and you’d think they’d bite with fangs or something terrible, right? No, they just stab their prey with modified legs and inject the poison right in before eating it. That would be like if humans vomited on food before eating it. Oh man, Thanksgiving would be terrible. 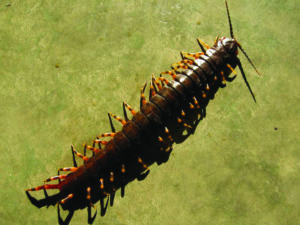 lish invertebrate. Ever wonder why they call them that? It’s not because they’re fast, but because their bite feels like you’ve just been shot by a freakin’ bullet. That’s just their bite, though. As their venom courses through your bloodstream for the next 24 hours, the pain spreads to your entire body. Bullet ants are seldom solitary, and if one bites you, you can bet the others in his little gang want to bite you, too.

The bullet ant sting has nothing on the warrior wasp of Central America, though. The sting of the warrior wasp is the most brutally painful sting on the Schmidt Sting Pain Index, and has been described as “Torture. You are chained in the flow of an active volcano.” This feeling persists for up to two hours. Why, oh why?

If you think you’ll be safe from the creepy crawlies out in the water, you just traded bad for worse. Everyone thinks piranhas are scary, but they’re goldfish compared to things like caimans, large cousins of the alligator. Caimans are infamous for being indiscriminate predators, eating anything they can sink their teeth into. They’ve been known to grow up to 20 feet long and weigh up to 2400 pounds. In case you were wondering, the largest donkeys weigh just over 1,000. Then again, not many people flee screaming in terror at the sight of a donkey.

Should you escape the caimans, beware the candiru, a parasitic freshwater catfish native to the South American rainforests. Sometimes called the vampire fish, this thing has fostered a reputation for terrifying men around the world. Rumor has it, men… Aherm… Answering the call of nature have a surprise visitor that swims right up and- We’ll just go ahead and pause it right there. This is a family-friendly article!

These claims about the candiru have been widely disputed, and are more than likely a load of nonsense, but it’s still a pretty cringeworthy thought.

Of course, all of this nightmarish horror is a moot point, because the thing most likely to kill you in the tropics?

Man, what an anticlimax. I’m just going to go back outside and be thankful I’m not sweating my beard off in 98-percent humidity.