Additional details are emerging in the case against brothers William and Michael Pope — the latter a Sandpoint resident — alleging five misdemeanor and two felony violations each amid the violent Capitol protest Jan. 6 in Washington, D.C., which resulted in the deaths of five people and dozens more injuries.

According to court documents recently unsealed in the District of Columbia, 32-year-old Michael Pope joined his brother William, a Kansas resident, to participate in the Jan. 6 mass gathering of supporters of former-President Donald Trump, who converged on D.C. to oppose the certification of Joe Biden as the 46th president of the United States. 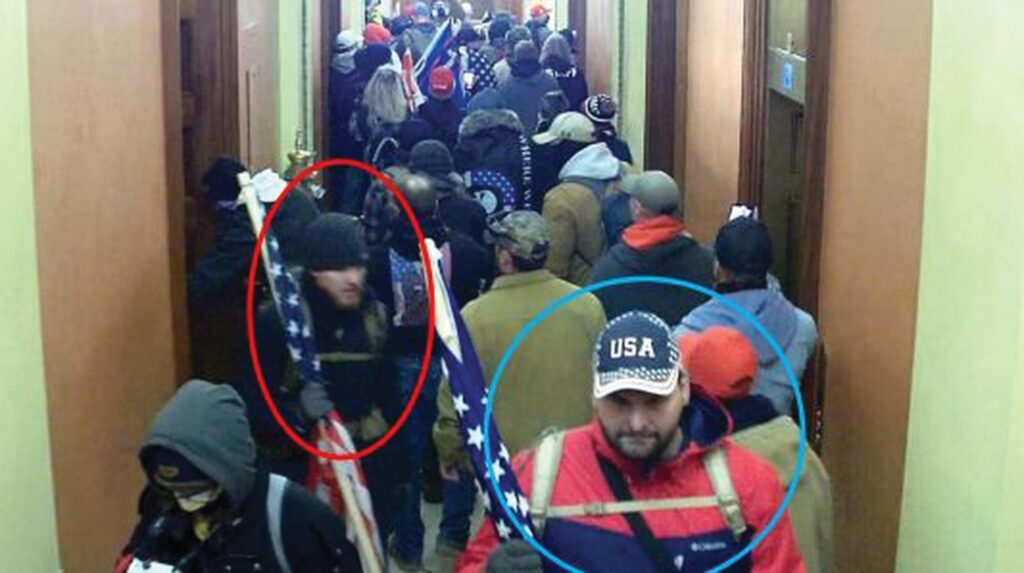 Surveillance footage from the U.S. Capitol on Jan. 6 showing who investigators believe is Sandpoint man Michael Pope (circled in red) and his brother William (circled in blue). Courtesy FBI.

The so-called “Stop the Steal” rally, during which Trump and others repeated baseless claims of fraud in the 2020 election, quickly morphed into what both Democratic and Republican lawmakers have termed an “insurrection,” as an angry mob of Trump supporters — some armed with weapons such as tasers and baseball bats — stormed the Capitol in attempt to halt the certification of the election by a joint session of Congress.

Both carrying American flags, the Pope brothers were recorded from various sources in the crowd of individuals who forced entrance to the Capitol, many of whom tussled with Capitol police as they filled hallways, broke into and vandalized offices, and occupied the Senate floor — requiring the evacuation of Congress members and staff to safe locations.

In a video posted to William Pope’s own Facebook feed, he stated that Michael Pope had flown in from Idaho specifically to join him.

An arrest warrant was issued for Michael Pope on Feb. 10. He turned himself over to federal agents Feb. 12, that day appearing in a virtual hearing before U.S. Magistrate Judge Candy Dale in Boise.

The judge released Pope as he awaits future hearings, stipulating that he restrict his travel to the 10 northernmost counties of Idaho and the District of Columbia, should he be required to travel there for trial. He may not possess a firearm, destructive device or other weapon; must maintain his current residence without prior approval of the pretrial services officer; and must adhere to all federal, state and local laws, orders, rules and the like regarding COVID-19 protocols, including but not limited to Idaho’s Reopening Plan and the orders of the court.

The remaining offenses are misdemeanors, with maximum prison sentences of between six months and a year, along with fines ranging from $5,000 to $100,000.

Capitol surveillance footage shows the brothers in various locations, including the hallway outside House Speaker Nancy Pelosi’s office — the door to which William Pope apparently struck with the bottom of his flag pole in an attempt to force open the door.

Michael Pope is seen in surveillance footage apparently refusing to comply initially with law enforcement officers who attempted to physically remove him from an elevator. Though he did leave the elevator, both Michael and William Pope continued to occupy the Capitol.

News footage from MSNBC also showed William Pope inside Statuary Hall, and a video posted to YouTube recorded an incident during which he was restrained by Capitol police.

The Popes were identified to the FBI by witnesses who viewed the footage. Contacted by the Kansas Reflector newspaper on Jan. 11, William Pope told a reporter that, “I’ve reported myself to the FBI and remain loyal to the United States of America.” Court documents state that William Pope submitted a statement and photograph to the FBI on Jan. 12, stressing that he committed no damage in the Capitol, nor engaged in any violence.

“I am loyal to the United States and was only there to exercise my freedom of speech,” he wrote. “I left the building voluntarily.”

Meanwhile, Michael Pope had returned home to North Idaho via a circuitous route — first attempting to rent a car in West Virginia in order to drive back to Idaho, then booking a return flight to Spokane out of Pittsburgh, Penn. The brothers had planned to follow their participation in the Jan. 6 demonstration with a camping vacation along the mid-Atlantic Coast, ending with Michael Pope flying from Charleston, S.C., but according to court documents decided to go home as quickly as possible after the chaotic events at the Capitol.

The FBI identified Michael Pope through open source searches, along with help from the Bonner County Sheriff’s Office. A vehicle associated with him was also identified using traffic cameras in the Coeur d’Alene area, showing travel consistent with a drop-off at the Spokane airport on Jan. 5.

According to the Spokesman-Review, Michael Pope and his wife purchased a home in the Sandpoint area in 2019, using a loan from the Veterans Administration. Data from the Bonner County assessor’s office shows the Popes’ home is located in the Selle Valley, valued in 2020 at more than $460,000.

Michael Pope is being represented by attorney Michael Palmer of Palmer George and Taylor, in Coeur d’Alene. No further hearings have been scheduled as yet, according to court documents.