It takes a village

This past February, I was fortunate enough to be part of a trip to rural Ethiopia as a result of my work with Uryadi’s Village, an international nonprofit based here in Sandpoint. The Reader kindly ran a story I wrote prior to that trip, introducing this organization to the community, and I was so excited about my experience there, as well as the work that is ongoing at our site in Sodo, Ethiopia, that I thought I’d write another story for the readers of the Reader about one of the experiences I had over there. 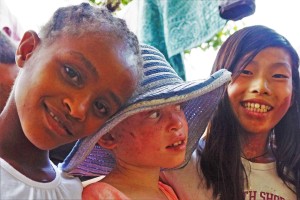 Hannah Dugana, left, was admitted into a care center managed by Uryadi’s Village. She was supplied with new clothes and a lot of love. Photos courtesy Sarah Klintworth.

Sodo is located in the southwest of Ethiopia and has a population of roughly 250,000. It’s part of a larger area called the Southern Nations, Nationalities, and People’s Region—makes our country names seem like a piece of cake!

Sodo is the site of Wolayta Village, which is our first project village. This beautiful site was given to us by the local government for development into a self sustainable orphanage community, which is our chosen work. Ethiopia has roughly 5 million orphans due to a wide variety of factors ranging from a high rate of HIV/AIDS transmission to economic and food access challenges. Infants are commonly abandoned at birth, and children at any age can be abandoned due to various pressures on a household or parent, or can just end up on the street through other paths.

Currently, we care for 30-plus children who are temporarily housed in a rented facility. With the help of an incredible Sandpoint local, Erik Keller, who is overseeing the construction of our new family style housing at Wolayta Village, we hope to move our children to this permanent, permaculture-based community home by the end of the year.

One example of how children can end up alone, which I witnessed firsthand, is the case of Hannah Dugana, a 9-year-old girl we admitted to our care center while we were there in February. The local government office that does its best to care for the women and children of the area who are in crisis invited us to visit one of their sites.

When we arrived at the dilapidated building, part of an abandoned guest house compound, there were half a dozen children playing and hanging around outside, dressed in clothes that had clearly seen better days. Predictably, they all wanted a chance to get in front of my camera, and they were enthusiastic about being part of anything and everything that we were doing.

Seeing foreigners in rural Ethiopia isn’t the phenomenon that it must have once been, but it’s still an experience that left me feeling uneasily as if I could begin to identify with celebrities. Everywhere we went, we attracted attention. It was enough to make me wonder how I would readjust to being just another normal human being when I got home!

In this situation, it was no different, and as we talked with the official who was giving us the tour, the kids crowded around and jostled for the prime position to have their pictures taken. They got no end of entertainment out of seeing the pictures I was shooting on my display screen, and had a great time hamming it up for me.

One of them was an exceptionally beautiful girl who we learned was deaf. She had been found on the street, unable to communicate how she ended up there, where she came from, or even what her name was. She knew some very basic sign language, but not enough to tell her own story.

This girl was dressed just like the other children, but somehow, she just seemed to glow with some kind of inner light that couldn’t be repressed. I can only imagine what her story is. A young, pretty girl like her, unable to communicate, alone on the city streets—the possibilities are an endless string of horror and atrocities that are all too likely to have happened to her before she found this place of relative safety.

As we heard her story, it became clear why the official had invited us here. We were already taking care of a 14-year-old deaf boy, and six of our children are older, special needs children. Our kids attend the local public school but they are part of a special needs class with tutors and lots of specialized teaching.

As the situation became clear to us, the solution also became very simple. We told the official we would take her and that was that. Since she couldn’t tell us her name, we had to make one up for her, a singularly odd thing to be doing but necessary. And so Hannah Dugana came to live at our care center.

She was given a bath, clean clothes, and a safe, clean place to live, with regular meals and kind, caring women surrounding her. She now attends school with the other kids, and is making progress quickly. She has become something of a big sister to the babies we also care for, and we receive regular updates showing her holding them, caring for them and looking more at peace and relaxed than she did when we met her.

One of the most incredible parts of this experience for me was her sweetness, and the way her smile lit up everything around her. It may be a long time, if ever, before Hannah is able and willing to explain how she came to be alone on the streets, or what happened to her there. But the amazing part about all this is that our organization, Uryadi’s Village, was able to step in and take care of her, to give her a place to be safe, to get an education, and to be a 9-year old girl without fear. Knowing that a life has been changed, perhaps even saved, by our work, makes it all worth it.

For more information about Uryadi’s Village, and our work, please check out our website, www.uryadisvillage.org.