Humans love a good brain teaser. How many posts have you scrolled through on Facebook where people are arguing whether or not 4+(2×1)=9 or not? Curiously, many of the most bizarre and thought-provoking brain teasers and riddles never make it to the crucible of Facebook feeds, though they probably should.

Here are a few curious thought experiments with no clear answers. Feel free to argue about these online — in a respectful and thoughtful manner, of course.

Imagine you take a trip to an island with a small town on it, not unlike our lovely Sandpoint. The inhabitants of this town are referred to as knights and knaves — knights will always tell the truth, and knaves will always lie.

In its most basic form, there is one question you can ask every resident of the island that will give you a definitive answer and allow you to move on your merry way in haste. You could just look the answer up on your phone, but isn’t it more fun to try and figure out the puzzle?

This logic puzzle has been explored a number of ways throughout the past four decades, including adding variables such as knights and knaves spontaneously switching stances, replying in a language you don’t speak or the addition of a third class of “normals” that can say whatever they want, be it the truth or lies.

Do you have what it takes to survive the trip and make it back home? 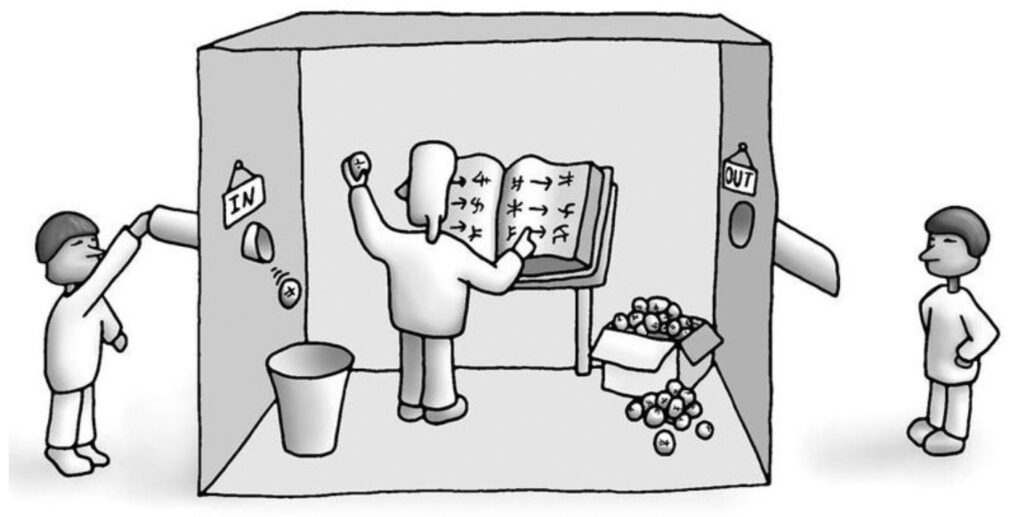 This thought experiment has become more relevant than ever in the past decade, which has seen the rapid advancement of artificial intelligence. I’ll tell you why soon.

Imagine you are locked in a room filled with dictionaries and translation materials. Every 30 minutes, a piece of paper slips under the door with an inquiry written in Chinese characters. Your job is to accurately translate the question as well as the correct answer, using the myriad tools at your disposal. Chances are, you don’t speak Chinese, so you don’t fully understand the scope of what you’re doing; but, with the proper tools, you are able to emulate the language and reply effectively. Eventually, with enough practice, you should be able to fake it so well that the questioners on the other side of the door are completely ignorant to the fact that you are not a native Chinese speaker.

This illustrates a number of issues and concerns with artificial intelligence as it improves. The foremost question being: At any point, does the computer become aware that it is a computer, and that it is doing stuff for humans, or is it just using the tools around it to fake it and appear to think as a human does?

Is that what we have been doing all along?

To those of us who remember the chatbots of the early 2000s internet, look how frighteningly close to human emulation bots have become now. You may have a number of bots in your friends list on Facebook right now, grabbing and altering photos and stringing words together with such efficiency that you’re completely unaware that it has never been a real human, it’s just there to harvest your data.

Disclaimer: This thought experiment has been cited as causing extreme existential dread among some who read it. You know I like to joke around, but this is a serious disclaimer. If stress, anxiety or existential dread are things you actively suffer from, maybe just skip this one.

Personally, I find the premise of this one to be ludicrous, but I have to post the disclaimer, anyway. First posted in 2010, “Roko’s Basilisk” is a thought experiment that explores some really interesting ideas in a puzzling way.

The idea is that, sometime in the future, humankind may create some kind of omnipotent artificial intelligence that will be able to access our brains, singularity style. In doing so, it looks through our memories to identify two kinds of people: the people who supported its creation, and everyone else — those who were ignorant of it, and those who opposed it. The supporters of its creation will be allowed by the Basilisk AI to evolve to the next level of human evolution as Terminator-esque cyborgs or whatever. Everyone else gets a hot wire in their brain that causes the illusion of eternal torment.

Dystopian as that sounds, it illustrates an intriguing point. There is little benefit in opposing its creation, as that will only be met with pain. Supporting its creation becomes the most logical step. Simply thinking about this choice means that a being that has not been created yet is influencing decisions to help bring itself into existence.

In a way, this is a very human dilemma we have experienced time and time again throughout civilization. Every time monarchs, politicians, or ruling classes in general laid groundwork for dynasties that would inevitably last for generations, they were at the mercy of the will of beings who weren’t even conceived yet. The actions of supporting these nonexistent beings would go on to shape world politics, sciences and the arts for centuries — and continue to do so.

Now if you’re worried about a killer AI torturing you in some dystopian YA-novel future, don’t worry. The carbon in our bodies is a far more valuable resource to harvest. They’ll just take all of that to build more robots while we turn into a gooey puddle of sludge.