The Mank-ing of Citizen Kane

Movies about movies being written by writers — much less writing a review of such a movie — risks plunging viewers and readers alike into a snarl of competing narratives, muddied intentions and scrambled perspectives. When that movie is the frenzied penning of Citizen Kane by journalist/critic/and screenwriter Herman “Mank” Mankiewicz in 1940, the circuitous blending of artist and subject, the fluidity of time, and line between medium and message seems unusually appropriate. 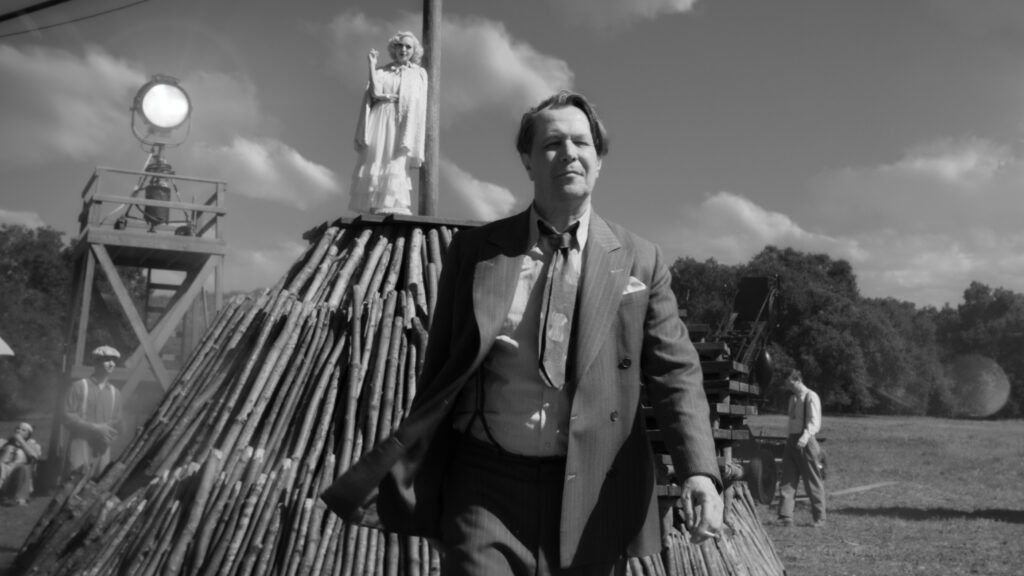 Of course, Citizen Kane and its legendary auteur director and star Orson Welles are (or should be) considered iconic by audiences — the premise of both being a thinly veiled cautionary tale about the unchecked power and ambition of real-life media baron William Randolph Hearst. Less widely known is the role played by Mankiewicz in creating the first draft of the screenplay. Broadly, that’s what Mank is about, but no more so than Citizen Kane is about a sled.

Released Dec. 4 in theaters and on streaming platform Netflix — and screening Thursday, Dec. 10-Sunday, Dec. 13 at the Panida Theater — Mank is a biopic about a man but also an entire entertainment ecosystem; simultaneously a piece of period nostalgia and an indictment of the cynicism, greed and pettiness baked into the bones of America’s various dream factories.

Shot in stylish, gauzy black-and-white by director David Fincher, whose father Jack receives writing credit, we are bounced back and forth from the early 1940s to the mid-1930s with the shambling, barb-tongued and boozy Mank as our guide into the nether spaces of Tinseltown.

When we meet Mank (played to perfection by Gary Oldman), he’s already washed up; yet, on the strength of his past brilliance, still indulged to draw a hefty studio paycheck and ramble about the backlots — incessantly smoking, gambling and drinking with a stable of side-eyed, wiseass writers whom he has personally assembled.

Despite the witty repartee and fancy parties, it’s clear that Mank is a vessel empty but for a minor ocean of whiskey. His “second chance,” as it were, comes after a car accident leaves him laid up with a broken leg in a dusty guesthouse in the southern California desert.

Bed-ridden, unshaven, sweaty and perpetually in a bathrobe that can be practically smelled through the screen, Mank has been charged with writing the script for Welles’ first feature film — what would become Citizen Kane. Yet, he’s also in a forced convalescence intended to heal his leg and keep him sober enough to handle a pen — both tall orders, made taller when his deadline is shortened from 90 to 60 days. Naturally, as most writers, he doesn’t really get down to work until he has a mere two weeks left before he must deliver the finished work.

That’s one of the narratives at play in Mank, as he and his handlers bring the screenplay to fruition — punctuated by some nagging and a confrontation with Welles, admirably portrayed by Tom Burke. The other story being told is through a mass of flashbacks that occupy what seems to be at least half of the screen time.

Those flashbacks cover the most ground, including the erstwhile protagonist’s fraught relationships with studio bosses and the passel of courtesans surrounding Hearst at his San Simeon pleasure palace — complete with giraffes and elephants grazing the grounds — his platonic love affair with Randolph’s much-younger lover Marion Davies (Amanda Seyfried), and his own exasperated family, with Tuppence Middleton as his wife “poor Sara” and Tom Pelphrey as brother Joe, who went on to become a successful director and writer, even as Mank’s alcoholism killed him at 55.

There are elements of redemption in Mank, but also satire, no small amount of sorrow and, as with Citizen Kane itself, power and obsession. Not quite a masterpiece itself, but an engaging piece by (and about) a master.