A dog walk in the park

My 1957 Cal-Berkeley bride is staring 86 in the face and has an underlying medical condition, which makes her a COVID-19 magnet. I am 89 and have a superior, more virus-tempting underlying medical condition. This makes me a preferable target. (We have been competitive from the start.) Concerned friends ask how we curmudgeons are managing to dodge the pandemic and remain intact. They say if we test positive we’re goners. Toodle-oo. Bye bye. Au revoir.

A long ago backyard equestrian, Jacquelynn, my soulmate since 1956, deals with today’s Trump-caused chaos by reading novels, watching PBS and CNN, cheering for the Seahawks’ Russell Wilson, tending an indoor nursery, writing letters by hand (she detests computers) and bitching about her recently installed walk-in bathtub, which she insists is “for old people” who bust hips and heads climbing in and out of regular tubs. She has always despised shopping and cooking, and happily reared three now ancient children essentially on TV dinners. Because I prefer authentic food, I became a grocery-shopping oracle and three-meal-a-day chef starting with retirement in 1986. (To be fair, we do share the vacuum when living room cat and dog hair reaches ankle depth.) 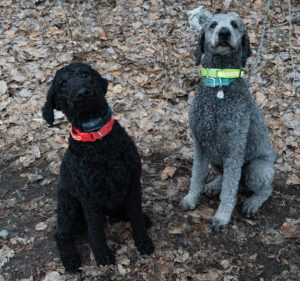 My own response to the virus is more athletic than hers. Having forsaken decades of sailing, tennis, travel and warbling old songs with buddies no longer here, I walk with Tippy, who is 10 and the ultimate example of man’s best friend. Sometimes we tramp the forested Blue Gate trail, sometimes Dover’s tidy paths, sometimes the flat approach to the steep Mickinnick climb, sometimes the leafy Bay Trail along the lake.

Most hikers we meet on these journeys are accompanied by a dog or dogs. Generally we prefer meeting people with dogs to those without. Dogsters often seem happier. They smile and visit. We have yet to meet a dog person wearing a Make America Hate Again red hat and the compulsory hostile scowl.

Our favorite saunter is through Lakeview Park, a two-minute hike from home. We like the majestic ponderosas, Douglas firs, lodgepole pines, western red cedars and arboretum so lovingly led and kept gorgeous by volunteers Mary Toland and pals Molly, Rae, Cindy, Sue, Cara, Mary Jo and others. The park’s natural serenity instills in visitors — at least this one — the faux feeling that there is indeed peace on Earth. We also love the many merry park dogs and dogsters we meet along the way.

Sometimes, depending on time of day, we greet mailman Chris as we are walking out the driveway.

Tail rotating madly like a ceiling fan and ears flat back with love and admiration, Tippy dashes to Chris for a tasty tidbit. Oh, joy! If Tippy were appointed postmaster general by Joe, she’d give mail carriers a hefty raise for all they’ve done and do. An American anachronism like police officers who once walked a beat, letter carriers like Chris happily hiking door to door and knowing his neighbors are another gem in Sandpoint’s bejeweled crown. Mail carriers hoofing it house to house remind us that Sandpoint is more akin to Mr. Rogers’ Neighborhood than to Armageddon.

Passing the tennis courts as we head toward the lake — or, because of the winter drawdown, the sandy beach along its shoreline — Tippy and I pause to watch a middle-aged couple repeatedly slinging a tennis ball for their 4-year-old mixed breed best friend, Savannah, on the wet courts. Tippy, off leash, joins the chase.

They are from Missouri, have lived many places and reside in Bayview. They adore Sandpoint and want to move here. “We walk downtown and everyone is so friendly,” he says. And with a smile as wide as Kamala’s, she adds, “This seems like it must be a wonderful place to live.” And I say, “Yes, it is!”

Often, a Parks and Recreation guy with a reverse vacuum cleaner is blowing a zillion leaves into little piles when Tippy and I pass by. I wave and he waves back. We don’t know one another, but we’re friends. Recently I told him he looks like he loves his job. He said, “I get to drive this buggy around [a motorized contraption loaded with gas cans and tools of the trade] and be outdoors all day. I also drive that big John Deere.”

With a wide grin, this contented Sandpointian adds, “I love this place. I’ve got it made.”

As we approach the boat launch my best friend and I come upon another couple, oldsters half my age, walking two more of man’s best friends — both rescues — as was Tippy, but even older, being 14 and 17. We compare canine notes as our dogs briefly bristle, sniff butts, then romp off to cavort and piddle along the new sandy playground created by the drawdown.

Tippy and I spend nearly an hour strolling, watching the water, the ducks, the geese, the osprey, the Long Bridge, distant trains huffing and puffing across the lake, and some gathering rain clouds.

As Robert Browning wrote, “God’s in his heaven, all’s right with the world.” Well, it is with our world, on our beach, in our park. Lucky us.

Before we start hiking home we greet two ladies we’ve met before during park wanderings. They had been obviously unimpressed with me, hadn’t a clue; but they address Tippy by name. Turns out we have a mutual friend, Montana writer/publisher Sandy Compton. They and their part-poodle are so cheerful I am tempted to ask their names, but don’t. When guys going on 90 ask young ladies in their late 60s their names he can be perceived as a dirty old man. And sometimes the truth hurts.

As Tippy and I head up the boat ramp, four thin, 30-something adults plus three kids with jump ropes and a dog head down the ramp. The elders are in swimsuits and jogging in place, presumably to get warm. (It is an icy late-November morning.) They lope out to the water, maybe two football fields from shore. The kids build sandcastles — and the adults go swimming.