Color is a double-edged sword in the natural world. A bright and colorful animal is less likely to capture prey that may see it coming, and is far more likely to be eaten by a camouflaged predator that it doesn’t notice. However, bright colors and reflective sheens are appealing to other members of the same species and make it far more likely for a flamboyantly hued creature to procreate with potential mates.

Birds-of-paradise are a prime example of living a colorful life to its fullest. Members of the family Paradisaeidae, comprising more than 42 species, these tropical birds primarily inhabit rainforests and swamps and are native to New Guinea and the eastern coast of Australia. 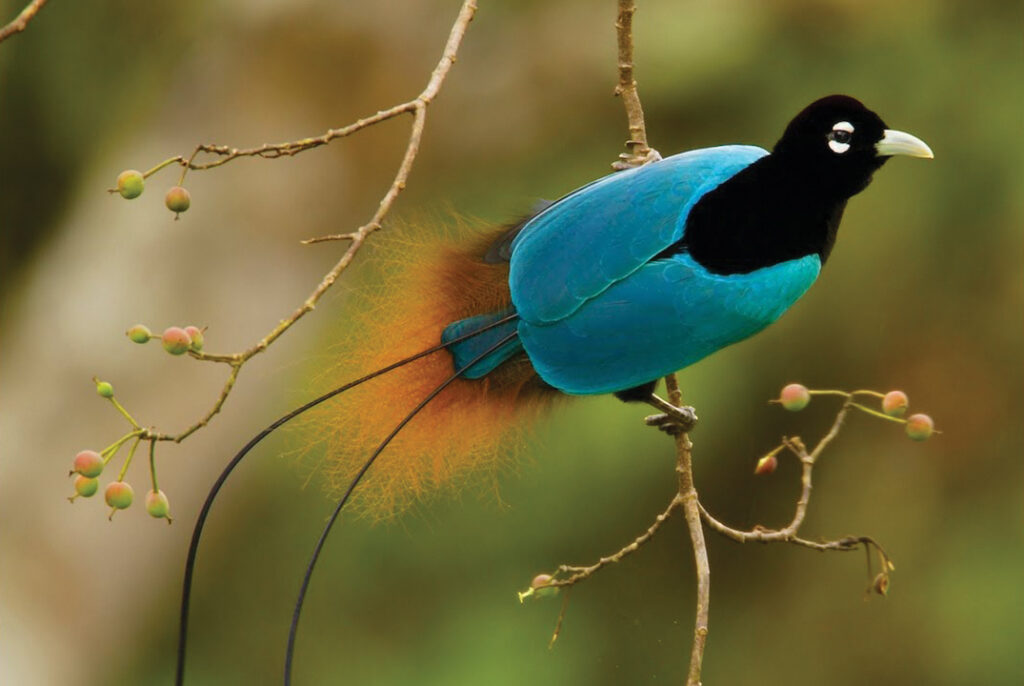 A bird of paradise. Courtesy image.

The species within the family of Paradisaeidae are extremely diverse and, because of this, generalizations about them cannot be made with only a few exceptions — those being that they are generally extremely colorful and the males tend to make very elaborate courtship dances and displays to woo potential mates.

As an example, the males of the Carola’s parotia species are often pitch-black in color with bright white and orange plumage on their wings, and special iridescent scale-like feathers on their necks, similar to hummingbirds. The males of this species will congregate on the ground in large numbers and begin an elaborate courtship dance to impress females, in a process known as lek mating. The Carola’s parotia has been recorded as displaying one of the most complex dances seen in the avian world, with the pitch-blackness of their feathers making them appear to completely change shape as they move.

Another curious behavior displayed by many of these species is polygamy. Many birds are strictly monogamous creatures, such as swans, which are renowned for bonding to a mate for life. During their mating season, many birds of paradise will engage in polyamorous displays that could make Caligula blush, occasionally with the interjection of other species slipping in and creating hybrids.

The plumage of many birds-of-paradise seems completely outlandish to virtually every other bird species on the planet. Some have specialized breastplates lined with iridescent feathers, which they can puff up and expand to form a reflective collar. Others have wispy feathers jutting from their sides that look like strands of fur. Stranger yet, some have little whip-like feathers jutting from their heads that make them appear as though they have extra eyes on stalks.

You may wonder how such colorful birds haven’t been driven to extinction by predators, and that’s a fair thing to ponder. Luckily, birds-of-paradise have relatively few natural predators in New Guinea. Many stick to the highest levels of the rainforest canopy, heading to the forest floor only to bathe in puddles or dance for mates. Hawks and snakes share territory with the beautiful birds, but only the occasional chick seems to be worth the energy to hunt. As with virtually every other animal species on the planet, however, humans encroaching on their homes have begun to threaten the birds-of-paradise.

Due to their tendency to stick to the canopies, they are incredibly difficult to study, so we don’t know a tremendous amount about their eating habits. The few we have in captivity at zoos seem to enjoy a wide variety of fruits in their diet, and we have observed some boring out holes in trees with their bills in order to reach the insects. Similar to common jungle fowl and our chicken flocks at home, many are likely opportunistic feeders, and will gladly snap up anything they can fit into their beaks.

While the adult males of most species are quite fanciful, the chicks are actually born naked of feathers, and won’t open their eyes for almost a week after hatching. Additionally, unlike chickens, which can brood as many eggs as they can fit under their fluff, most birds-of-paradise will rear only one, sometimes two chicks per mating season.

They also take a considerable amount of time to mature, in comparison to other birds. Females will take a little more than a year to reach maturity, while males will take between two and four years. Additionally, most males won’t develop their spectacular plumage for up to three years after that. The average chicken will reach sexual maturity by 6 to 8 months and is ready to brood its own clutch of chicks by the following spring.

If you’re interested in seeing some of the glorious displays of plumage and avian debauchery, check out the library’s nonfiction section. Birds of the Photo Ark, by Joel Sartore, can be found at 598 in the nonfiction section, along with an impressive display of other photo books showcasing the animal kingdom. Better yet, go onto the library’s website and put a hold on it before someone else checks it out.

Now, if you don’t mind, I’m going to go step outside and pretend I’m in a tropical paradise. It’s certainly hot enough.