Few technologies are more intimately connected with the human experience than the telescope. Put in the simplest terms, it’s a device that makes your eye bigger, enabling it to gather more focused light on a broader portion of your retina, thus giving you super vision at great distances. As such, the telescope was the first of all inventions to magnify — literally and figuratively — one of the primary senses of the human body. 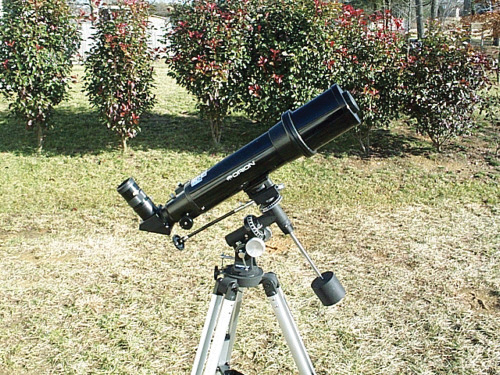 In its simplest form, a telescope is a tube with a lens of concave, convex or plane-parallel glass at one end — the “objective lens” — and another, smaller, lens of similar design at the other end, called the “eyepiece.” The objective lens gathers, bends and then focuses light, pulling it down the tube to be gathered by the eyepiece where, as its name suggests, the viewer’s eye conjures the image of the faraway object toward which the device is pointed.

The degree of magnification depends on the size of the objective lens — the bigger, the more light can be gathered — and the relative thickness of the eyepiece, which is located near the focal point and pulls together the image and makes it clear. Some eyepieces give you greater or lesser magnification — not unlike a pair of eyeglasses — that will be more or less useful depending on the size of your objective lens.

The longer the tube, or “barrel,” the farther back in the instrument the focal point will come together. Depending on the type of eyepiece, this can translate into more power. Short, wide telescopes will have a broader range of vision, as the surface of the objective lens will draw in more light. Long, thin telescopes will bring light to a fine focus, enabling deeper depths of view.

Of course, there is much more nuance to the inner workings of this seemingly straightforward design — and the rudimentary explanation above only applies to the type of “refractor” scopes that we think of when we conjure images of pirates at sea. The other main variety, “reflector” telescopes, use curved mirrors rather than lenses to bounce light through the barrel, focusing and refocusing until they reach an eyepiece mounted on the side of the device. This form of scope, invented by Isaac Newton in the 1600s and mostly unchanged in design into the 1800s, is preferred by many for its greater image clarity, owing to the fact that glass is much easier to mar with imperfections.

Beyond that there are more than a dozen types of telescopes — from the humongous radio scopes like we see in movies such as Contact to the orbital Hubble (a Cassegrain reflector) to a multitude of reflectors that play with wavelengths, to devices whose names point to their lustrous pedigrees: Galileoscopes, Keplerian telescopes and Newtonian reflectors.

Suffice to say, a full analysis of the physics at work in your average backyard telescope reads like stereo instructions, but shot through the mechanics of these instruments are the mystical yearnings of millennia as well as the flowering of science going back to the Renaissance.

I know, I ventured into the world of backyard astronomy about four years ago and still don’t fully grasp the magic that seems to occur when I point my Celestron Astromaster 114EQ 114 mm f/8.8 reflector at a bright spot in the sky and suddenly see the moons of Jupiter bangled around the faintly orange-white blob like fireflies.

Right now is the best time to become a hobbyist astronomer. As Terry Jones, of Monty Python fame (and who died this year), sang in the Galaxy Song, “Pray that there’s intelligent life somewhere up in space / ’cause there’s bugger all down here on Earth.”

Indeed, grim misanthropy is either a byproduct of or inducement to staring into the endless expanse of space going back to the original telescopists of the 17th century — back when Dutch spectacle maker Hans Lippershey in 1608 came forward with his claim that by grinding glass lenses in a certain way he could produce magnification far beyond what was needed to read the shipping news in Rotterdam.

As with all great scientific inventions, there’s a historical cat fight between Lippershey and fellow Dutch eyeglass manufacturer Zacharias Jansen, whose partisans argued that the former stole the first telescope technology from the latter. Today, most scholars agree that while both men came up with the same idea, Lippershey arrived at it first and apart from his competitor. Still, Jansen got his due with credit for inventing the compound microscope. Those Dutch were really onto something in the 17th century.

And let’s not forget Galileo Galilei, whose tinkering with a telescope upended centuries of Catholic dogma by suggesting as early as 1609 that the Earth moved around the sun, rather than the (wrong) geocentrism that dominated Western thought since the time of Aristotle. Monty Python taught us that, “Nobody expects the Spanish Inquisition,” and neither did Galileo. Albeit, his tormentors were Italian inquisitors, but they still swooped on him like the flying squad of goons they were and beginning in 1615 tried him for the heresy of heliocentrism. He ended up dying under house arrest at the age of 77 in 1642.

Owing to this storied, tumultuous past, the telescope acquired something of a bad-boy reputation. There’s practically an entire genre of art devoted to depicting grubby geniuses — half mad, half wizardly — flopped out in their weird book- and squalor-filled observatories ignoring the paltry comings and goings of mere mortals to contemplate the spheres.

But that’s nothing new, the compulsion to understand what’s above to get what’s going on below has been with us since “we” jumped out of the trees and started making trouble for ourselves — and everything else on the planet — between 3 million and 6 million years ago.

From cave paintings to Stonehenge to the Pyramids and Ancient Aliens, human beings have a need to transport themselves skyward, and backyard astronomy is the quickest, easiest way to do it.

See Page 13 for more on the NEOWISE comet, which is visible at our latitude by looking northwest about 90 minutes after sunset. If you don’t have a telescope — and you should — bring out your binoculars for an epic celestial show through Thursday, July 23.