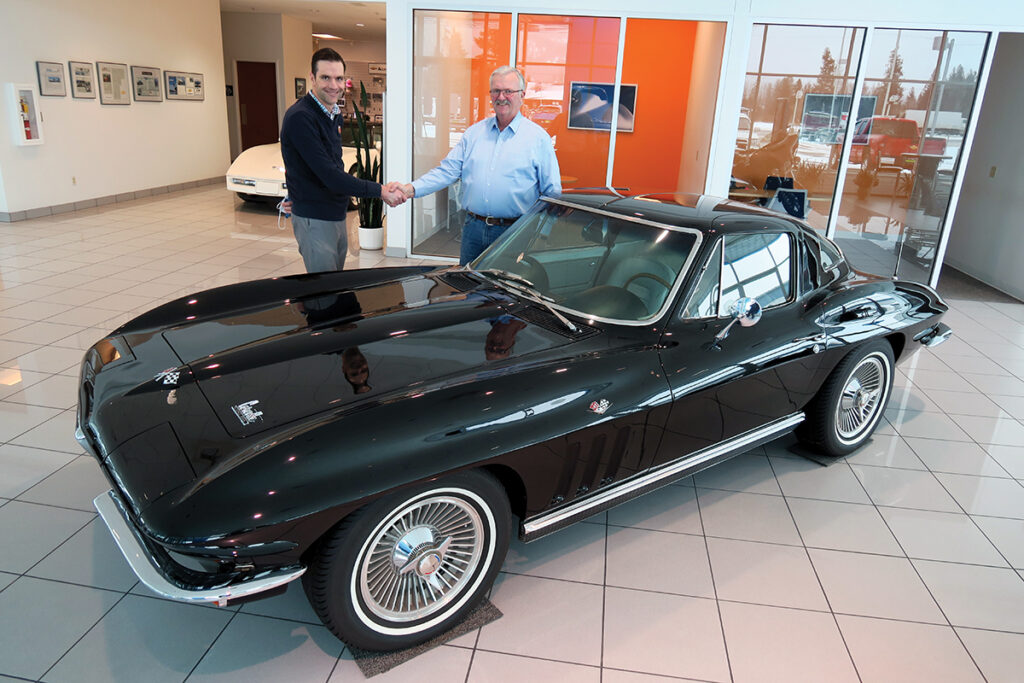 Brett Taylor, left, stands with his father Greg Taylor, right, behind an iconic 1967 Chevrolet Corvette – one of three on display inside Taylor and Sons Chevrolet in Ponderay. Photo by Ben Olson.

In the age of corporate ownership and chain stores, a family-owned business that spans generations is a rare accomplishment. When Greg Taylor announced to employees at Taylor and Sons Chevrolet on Feb. 17 that his son, Brett, would be taking over as principal dealer, it marked the end of a long career in Sandpoint for Greg, but cemented that the family-owned Chevrolet dealership — an institution in Sandpoint — would remain in the family.

“It’s a little bit difficult to give up on something you’ve lived with for so long,” Greg told the Reader. “But I think Brett has added to the development of this dealership over the last 15-plus years and I feel comfortable that he will continue to do what we’ve established — both our family and the Parker family before.”

The Chevrolet auto brand has held a storied history in Sandpoint for almost 100 years, when a man by the name of Wells obtained a Chevrolet dealership in 1922, calling it Inland Empire Chevrolet. Back then, when Warren G. Harding was president, a brand new Chevy off the line would run a Sandpointian about $1,000.

The Inland Empire Chevrolet dealership was located on the 200 block of Cedar St., where Di Luna’s and Idaho Pour Authority are currently located. Wells took on a partner named Billy McDonald a few years later, but in March 1927, O.B. Parker — Jack Parker’s father — bought out the half interest of Wells and the dealership was renamed Sandpoint Motor Company. A year later, O.B. Parker became the sole owner of the dealership and began constructing a new building across Cedar Street, eventually moving operations in 1929 where the dealership remained for 83 years. That location is now home to the new Bonner General Health Services expansion.

Jack Parker graduated from University of Idaho in 1955 and went to work for his father, who passed away in 1957. Jack became the dealer in 1959 and continued in that role until 1988 when he and Greg Taylor became partners and Taylor was named local Chevrolet dealer.

Greg’s career in auto sales began much earlier, in 1970, when after college he began working for GMAC in Spokane, Wash.

The arrangement between the Taylor and Parker families continued until 1994, when the Taylors bought out the Parkers’ interests and continued to operate at the Sandpoint location until 2011, when they built a new facility in Ponderay where it currently operates to this day. The dealership then underwent another name change to Taylor and Sons Chevrolet.

Over the years, Greg built on the family legacy instilled from the Parkers and passed it on to his own son, Brett, who graduated Sandpoint High School in 1997 and University of Montana in 2002. These tenets include trust, hard work, consistency and care for the community that has supported them in Sandpoint for decades.

Brett started working full-time at Taylor and Sons in June 2002, but he put in his time with the family business well before that.

“I’ve washed thousands and thousands of cars,” Brett joked to the Reader. “I’ll put it this way, I’ve done every crummy job that exists within this dealership and, frankly, so has Greg.”

“Except now I get to get him back,” Greg laughed.

Brett said he’s learned a lot from his father over the years, especially about working hard and taking care of their customers with honesty and integrity.

“Early memories are that family always came first — there was no question about that,” Brett said. “But the operation of this business and the responsibility toward the customers that would choose to keep this place open, choose us over someplace else, that was always a high priority within our family. Success was generated by hard work.”

Brett graduated from the NADA Dealer Academy in McLean, Va., in 2005 and took over as general manager of the dealership. With Greg officially handing over the reins this week, Brett aims to continue the legacy with his own family; wife Sara and three daughters, Jane and twins Claire and Charlee.

As for Greg, though he’s no longer the dealer, he has no plans to retire.

“Greg works seven days a week,” Brett said. “I don’t anticipate that changing until the day he dies. What this allows is … he works seven days a week, but he does whatever he wants, rather than being obligated to solely work with customer interaction, or human resources, or other elements of the job that are not necessarily more difficult, but not quite as much fun.

“I think that having a sounding board — someone with a lifetime of experience who has been through recessions and high interest rates, manufacturer difficulties and the like — is great to have.”

Greg said that he has confidence in Brett’s close-learned knowledge of the operation.

“He is well respected by his fellow employees and dealers and is genuine in his interactions with customers and should enjoy many years as the newest Chevrolet dealer in the nearly 100-year history of Chevrolet in the greater Sandpoint area,” Greg said.

“The thing about dealerships is, there’s not necessarily one way to do it,” Brett said. “But there’s a right way and a wrong way, and I think Greg has done a good job of setting the example of what the right way is.”