One springtime activity that’s in full swing is the rearing of baby chicks. We covered ducklings a few weeks ago, which present many of the same challenges, but chickens always deserve a special mention. Baby chicks sell in much higher quantity than waterfowl and are generally seen as easier to raise and more useful for your average backyard farmer. Additionally, baby chicks are often impulse buys this time of year because they’re just so darn cute — this is bad behavior, and if you consider buying an animal you’ve never raised on impulse, step back and do a little research at the library, first. These animals deserve that much.

If you’re ready to pull the trigger and bring home some peeping boxes of joy, I can help you get started with a little information here. Just like ducklings, chicks will need a brooder box — I made mine out of the base of a pallet and used plywood for the sides and floor, which gives plenty of room for about 30 chicks. Fill their brooder with softwood shavings so they have something soft to stand and sleep on — never use cedar shavings, as cedar oil is poisonous to chickens and it will kill them. 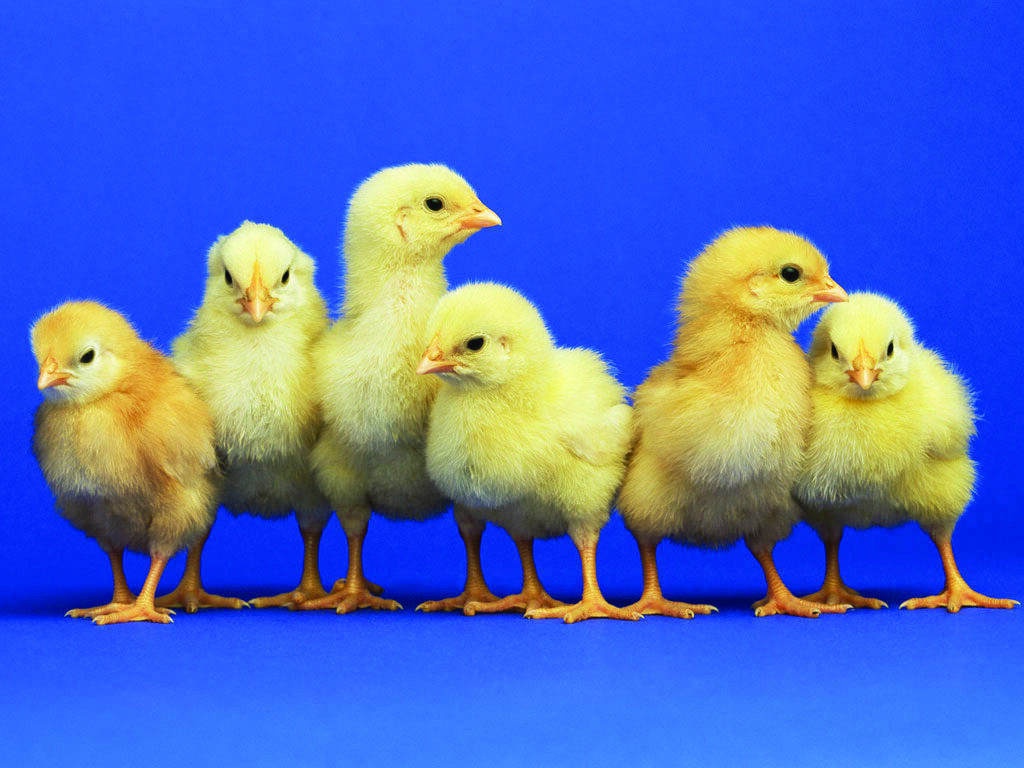 Worth noting: Plastic sterilite containers can make for good brooders, but they are highly susceptible to heat and can melt when in close proximity to heat lamps, which will cause lethal vapors for both yourself and the birds.

Chicks can’t regulate their body temperature for several weeks, until they start growing feathers, so a heat lamp should be provided for them. Their living area should be 95 degrees the first week of their little life, and it should be moved about an inch further away every week until they are feathered, or the ambient temperature is suitable. A handy way to identify the happiness of your chicks is if they are all huddled under the center of the heat lamp, they’re too cold; If they’re pushed to the edges of the box and won’t venture towards the lamp, they’re too hot. Chicks that are running around and scattered intermittently throughout the brooder are happy, and the temperature is perfect for them.

Your chicks should also be provided with food and water. Specialized feeders and fonts are sold from the same farm and feed stores from which you buy the chicks, and while they may seem like a steep investment, they will last for several years — especially the metal ones.

It may be tempting to buy your chicks lots of treats like mealworms or bagged salad mixes, but you will want to wait at least a week (preferably more), before you start giving them foods other than the chick starter crumble from the farm and feed store. Additionally, you’ll have an urge to pick them up and marvel at how cute they are, but you should wait to do this for at least a week. They are extremely fragile for their first week of life, and should only be picked up if they are being aggressive, are sickly and need to be quarantined, or you are dealing with pasty butt.

What is pasty butt, you might ask? As self-sufficient as baby chicks are, able to perform virtually every task a chicken needs to perform shortly after hatching with no parental guidance, they aren’t very good at cleaning their rumps after relieving themselves. Sometimes, their waste will get trapped around their cloaca (essentially a dump-all orifice from which waste, and eventually eggs will emerge) and create a blockage. If this blockage is not dealt with by a human in the absence of a mother hen, it can cause waste to build up inside of the chick, which can be extremely painful and eventually lethal.

Cleaning pasty butt can be a bit of a chore, because you cannot simply grab the waste and pull — baby chicks are fragile, and that could easily disembowel the poor bird. Instead, the waste must be dabbed with a warm, dampened towel until it can break up enough for you to gently remove it, and then the baby chick must be dried off. Hilariously, they seem to find a hair dryer on a low setting most relaxing, and will generally begin to fall asleep while you dry them.

Once the chicks have grown, you probably won’t want them stinking up your house in their brooder anymore. Make sure you have a coop of some sort ready for them outside. You don’t want them to be cooped up all of the time — many of the birds are specially bred for a specific trait that makes them great to look at and, besides that, how would you like to be confined in a studio apartment unable to escape?

Don’t force your birds to live in a perpetual state as shut-ins, so make sure they have some outdoor space to run around. Just be mindful of your garden and your lawn. While chicken manure is fantastic for your garden, an unguarded garden is like an all-you-can-eat buffet for a flock of chickens.

Now that you’re ready to rear your own chickens, I should probably let you in on a little secret: chickens are a gateway drug. Your backyard will be a barnyard before you even realize it.