The Sandpoint City Council at its Nov. 18 meeting gave the green light to a high-value land transfer at City Beach, swapping the publicly-owned grassy space to the east of the Best Western Edgewater Resort for the Sand-Ida Inc.-owned RV parking lot, located south of the hotel across Bridge Street.

Sand-Ida, which owns and operates the Edgewater Resort, plans to double the footprint of the hotel, using a portion of the former city-owned property to accommodate at least 100 rooms — as well as the popular Trinity at City Beach restaurant — while also expanding parking. According to an assessment presented to the council in late October, each parcel is valued at around $2 million. 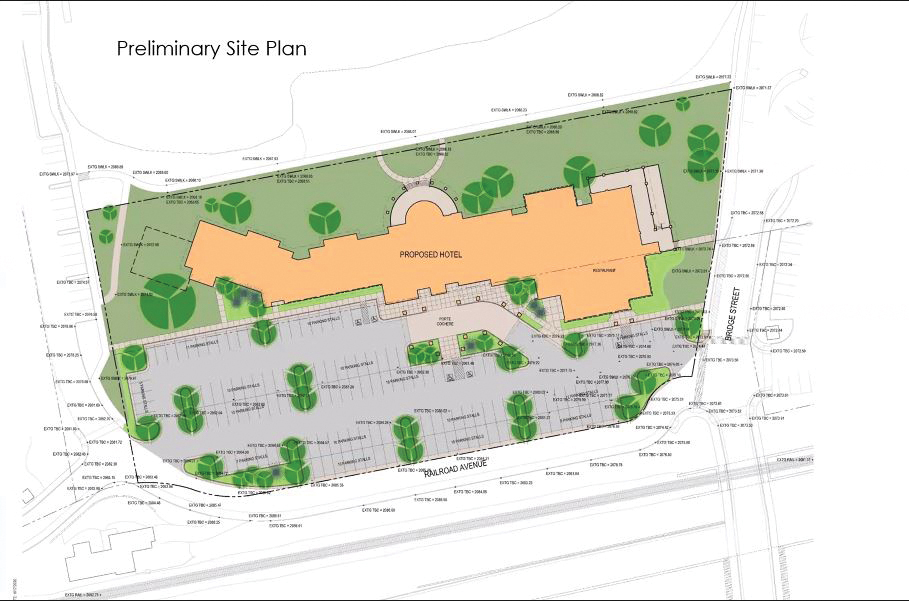 A preliminary design for the proposed new hotel site at the Edgewater in Sandpoint. Courtesy image.

City officials have long lauded the transfer as a “win-win,” allowing the Edgewater Resort to expand while giving the city increased frontage on Sand Creek — a central element of the recently-approved Parks and Recreation Master Plan, which puts into motion a long-term redevelopment of City Beach, including more parking and boat moorage relocated away from swimming areas.

According to Sandpoint Parks and Rec. Director Kim Woodruff, the land swap is “times 10, as far as a game changer,” adding about 2/3 of an acre to the park; bringing in more city-owned waterfront; removing and separating boat access from high-intensity use areas; and, by allowing a realignment of the parking area, helping facilitate new uses called for under the Parks and Rec. Master Plan — including potential large-scale arts and culture events.

“I truly do see this as a win-win,” Woodruff told the council, though noted that some citizens have criticized the land swap as a “giveaway” of valuable public land for the benefit of private interests.

“The city benefits when our businesses succeed,” Woodruff said, adding that the expansion of the Edgewater and larger parks plan also opens the door for opportunities to raise revenue during the shoulder season with meetings and other gatherings.

With the blessing of the council, Sand-Ida is clear to move forward with its intention to demolish the hotel on or around Sept. 7, 2021. The reopening — likely under a different brand — is preliminarily scheduled for spring 2023. Adrian Cox, one of the owners of Sand-Ida told the council that the company is hoping to make the hotel “a little higher end,” with nods toward Hilton and others.

Citing increased bed tax revenue, construction payments, impact fees and money flowing into city coffers from the restaurant, Cox said, “It’s important for the city to realize the financial benefits of this project. The ability for the city to move forward with its long-term vision of the City Beach is greatly needed and it’s dramatically being pushed forward by the swap. Without the swap, the city misses out on these revenue items. … But post-swap they will have short-term RV revenue, higher moorage revenue, there’ll be significant value in the expanded boat launch, all the parking has real value …

“I feel like there’s real benefit in massively changing the timeframe for the city to move forward with its long-term vision,” he said.

Cox also noted that Trinity would not have a home at City Beach without the expansion enabled by the land exchange — a condition of uncertainty that Trinity owner Justin Dick described as “fighting for my life and my restaurant.”

Dick said that since Trinity opened in 2009, the business has employed 1,260 employees and paid out $11.5 million in payroll and gratuities — nearly all of those workers being local residents, with some staying in their jobs for more than a decade (and counting).

“I can safely say that I’ve spent more time at City Beach than any one in this community in the past 11 years. I know how the beach works,” he said, specifically wondering aloud why the beach is only used by the community during the summer months. His point being that the land exchange helps open the door for more year-round uses.

“The beach offers a very affordable way for our locals to have a good time,” he said.

Meanwhile, as the hotel undergoes demolition and reconstruction, Trinity is intending to remain open at a to-be-determined temporary location — potentially the former Truby’s space at Main Street and Second Avenue — with plans to return to the City Beach location as soon as possible, Dick said.