Mad About Science: Game of Thrones, Science and You

The much-anticipated final season of “Game of Thrones” will soon be upon us. As we fly our house banners of nachos and march for a long dark week of binging, I thought it would be a fun little distraction to watch fantasy and science collide. 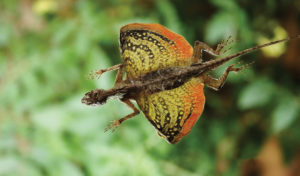 The books and the show are in the genre of low fantasy, which generally means: “Fantasy world built with believable blocks.” Most of the events can be explained with some degree of believability, and that’s what we’re going to explore today.

So, the question everyone is asking: How are the two seasons so wildly unpredictable? Winter for whole generations? Civilization couldn’t build through that!

To quote another one of my favorite media franchises: “Life finds a way.” Can you imagine how many crops and livestock you could grow and raise, preserve and stockpile over a nine-year summer with regular rains? Probably enough to survive a six-year winter at least. Westeros’ wild weather is a fantastical extreme, but it’s rooted in Earth’s history. Volcanic eruptions, such as the massive eruption of Krakatoa in 1883 caused a year of global winter, creating chaos, famine and societal unrest around the globe. Krakatoa was a colossal eruption, but it was a mid-binge nacho-fueled belch compared to something like Yellowstone erupting.

Volcanic eruptions change climates for a lot of different reasons. The primary one is an ejection of particulate rock and dust that acts like clouds, blocking heat from the sun which changes wind patterns, ocean currents, can cause the surface temperature of the planet to plunge for extended periods and prevent plants from photosynthesizing energy and growing (The primary factor in extinctions during volcanic climate events). Depending on the strength of the eruption, the blast and dispersion of rock and weight can even change the tilt or orbit of the Earth: not much, but every little bit has big consequences.

If that sounds like fantasy, I invite you to check out a book on geology from the library. Volcanic mass-extinctions and global climate change events have been pinpointed to very precise times in Earth’s history, using layers of excavated rock and ice as timelines.

The web of lies, deceit and questionable hook-ups are the biggest draw of everyone’s favorite fantasy story. The War of the Roses was a primary point of inspiration, which was a series of English civil wars that started and stopped sporadically from 1455 to 1487 and ended with pretty much everyone getting the short end of the stick.

The events were fraught with political intrigue, backstabbing incest and knights hitting each other with sticks. Despite being one of the most-studied events of the late Middle Ages, there’s a ton of controversy surrounding it as virtually all of the history appears to be exclusively objective.

Another point of inspiration ripped from the pages of history is the nobles’ penchant for poisoning one another. Before forensic sciences, it was pretty easy to poison your enemies and get away with it. It was so easy in fact, that several noble families in Renaissance Italy and the Republic of Venice (and Vatican City, worth noting) had specially-designed snuff rings with hidden compartments to poison a person’s wine.

Dragons! Everyone loves dragons, except for those poor saps that got carbonized by their fiery breath. While we don’t have giant fire-breathing lizards laying waste to whole cities, there are lizards that evolved to fly on Earth. Draco volans is a lizard from Southeast Asia that’s evolved with a cool webbing between its limbs. When it leaps from trees, it can expand this webbing and glide extended distances, just like a flying squirrel. It may not be able to breathe fire, but there are some animals that get pretty darn close.

The Pistol Shrimp has a specially-designed pincer that it can snap shut to create a jet of water and a cavitation bubble. The energy released when the cavitation bubble collapses can cause temperatures in excess of 4,000 degrees F for a very short period of time. In case you were wondering, steel melts at 2,500 F. With enough of these guys, you could create your very own Iron Throne!

We can’t talk about “Game of Thrones” without mentioning zombies. Zombies are purely fantasy … except they’re not. Before you put on your campaign hat, grow a beard and start shouting “CORAL!” in the streets, know that I’m talking about insect zombies. Cordyceps is a group of fungi that specially adapts itself to different breeds of insects in the rainforest. It kills the insect (primarily ants), takes over its central nervous system and steers the walking corpse back towards its friends so the fungi can propagate.

That’s all I’ve got for now, but if you want to get caught up before the new season drops, send a raven to the library to place some holds. Should you lack ravens, go check in with the good maesters at the desk. Surely they will be happy to help you.