There are times when I despair at the losses that are critical to our collective cultural soul. It’s more than a mental emotion; it is visceral. The loss might be a once wild place, a language facing extinction for lack of speakers or the nearly lost art and skills of blacksmithing, once critical to human evolution. 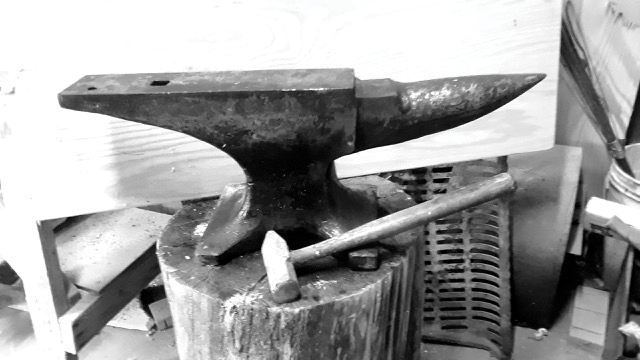 The anvil and hammer. Courtesy photo.

I marvel when doors open in our lives. They beckon us to step through and fulfill our destiny, find our purpose. For me, I stood mesmerized in one doorway before a blacksmith at Colonial Williamsburg as he stamped my name into a glowing, child-size horseshoe. Though only 8 years old, I felt the same powerful draw to forge metal and work with my hands 20 years later while strolling through a small town in northern Minnesota. I heard the distant but distinctive ring of an anvil. Some anvils “thunk”; the good ones “ring.” I followed the sound, met the retiring blacksmith and felt compelled to buy his magic anvil and all the tools in his shop. My wife and I towed this load to Colorado — breaking two U-Haul trailers in the journey. We set-up our teepee and I commenced a five-month winter apprenticeship at a working/teaching forge.

The first honored blacksmith was the Greek god, Hephaestus — counterpart to the Romans’ Vulcan. He was the son of Zeus and forged lightning to compliment his father’s thunder. The myth I embrace is that Hephaestus was angrily thrown from heaven after a dalliance with one of Zeus’s mistresses. He landed hard as a mere human with a crippled leg, but became beloved as a blacksmith for all mankind.

Smiths did everything: besides shoeing horses (one who only shoes horses is a farrier) they made the plows, the swords and armor, yet still had time to make a hinge or hearth tool for a household in need. Smiths were craftsmen and artists. Some made Timex swords; others, Rolex. Japan today honors their finest sword makers as national treasures. 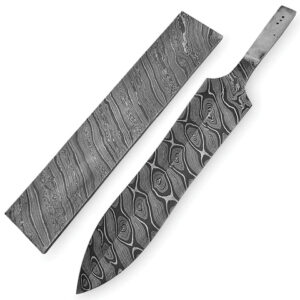 Special alloy metals infused in the thrust cones that withstand the heat at the bottom of a space rocket, or the durable metal in my artificial knee, are way beyond a traditional smith. For simplicity here, blacksmiths worked with two basic metals: wrought iron, which has minute carbon content, resists rust, is tough but cannot be hardened. The other, carbon steel, can be hardened through tempering. If you could hold these red hot metals in your hand, you could mold them like clay — enter the blacksmith’s hammer. The old sailing ship anchors you might see decorating seaside towns are wrought iron; carbon steel anchors would eventually appear as a wicked witch in mid-meltdown, rust piling up in the grass below.

Early forges were fired by homemade charcoal, which produces twice the heat of the wood from which it is made. Later, coal was used when available. Coal is not created equally. There are four general types. The coal heating a smith’s bellowed, forced-air forge is hopefully anthracite — high heat, less slag (dirty coal byproducts). When heated, it turns to coke, which is as pleasing as a sharp knife is to a chef. Coveted like a secret stash of standing buckskin firewood, a friend once drove 1,000 miles for a load of this “good” coal. Bituminous coal was used by a sad smith, burning cooler and leaving large chunks of useless slag behind. 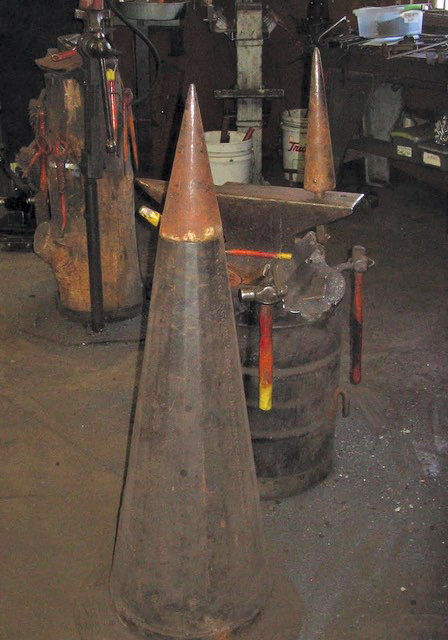 A good shop will have specific tools of the trade. The anvil is a brilliant invention. Each surface serves a different job shaping metal. The square “hardie” hole in the “heel” (opposite the “horn”) is a receptacle for numerous inserts that can cut, bend or form hot metal. A “leg vice” has a support post extending to the floor and can handle the wailing of a heavy hammer. A 200-pound “witches hat” cone mandrel will create various sized round rings and a “swage block,” with perhaps 50 different holes and curved valleys, will produce about any shape you desire.

Carbon steel is necessary for a durable blade that will hold a sharp edge. A 10-inch file is a good start. This is so hard it will snap like dry spaghetti when placed in a vice and whacked. But heat the file red to 2,400 degrees Fahrenheit, sink it into a bucket of sand for slow cooling and you have essentially sent the carbon molecules to a sunny beach and relaxed them. You have “annealed” the metal. When finally cool it will bend like a stick of gum in your vice.

A traditional smith will repeatedly heat and hammer the soft metal into the desired form, shaping the final edge with a stone-wheel grinder. Then it’s time to rudely jerk those relaxed carbon molecules off the beach by again heating the blade red hot and quenching in cold water. The carbon molecules are now back to brittle hard.

Now the art of tempering comes into play. Directly heating the backbone edge of our blade, colors start presenting and, as the temperature rises, moving toward the sharp edge like a rainbow. Each color represents a particular temperature and hardness.

Colors start at blue and end in straw yellow. For a screwdriver we’ll quench the metal (possibly in oil) when it moves from blue to purple; for an axe we’ll stop at orange. We will quench our blade when yellow reaches the edge leaving us with a durable backbone and a hard cutting edge.

To demonstrate the extreme differences in hardness, one teaching smith I worked with would stab his knife into a post and bend the soft tip 90 degrees, then pull it out and shave a nail with the hardened edge near the handle.

Tip: To weatherize and stave off rust in carbon steel, heat it to a “black heat” (about 700˚F, just before red appears) and quench in motor oil.

Making use of all our acquired skills, forging Damascus steel was our graduation challenge. We made a sandwich from a section of straightened, high-carbon railroad car spring and an equal piece of wrought iron or mild steel. The former starts burning at 2,400˚F; the iron hotter at 2,600˚F. Just like those life doors that momentarily open, there is but a moment in the fire when these two hot metals can be pounded and married as one — this is “forge welding.” It is a moment similar to when liberals and conservatives come together and find common agreement.

(Oops… sorry… another lifetime.) The metal is now one piece. Next it is folded and melded again, creating four layers. This is repeated until there are perhaps 128 layers or more. Polished, the layers visually appear. Some of the finest blades and metal art in the world are made from this fantastical steel.

Our graduation ceremony consisted of beer and the “blowing of the anvil.” The bottom of an anvil is concave, resembling a shallow soup bowl. We inverted one anvil, filled the bowl with gunpowder and placed a second upright anvil on top. Spectacular would describe the 150 pound anvil turning end-over-end 100-feet in the sky.

Thankfully, the art of blacksmithing is still kept alive and passed on by a tenacious few. They stay connected through abana.org.

Keep an eye open for those doors of opportunity, take the risk.