During our recent coverage of the memorial field grandstand demolition, I met Jim Woodward, the man behind Apex Construction. As we watched the grandstands being ripped out, he told me about how he first offered to demolish the aged structure, services he donated to the cause.

“[I told Sandpoint Parks and Recreation director Kim Woodruff,] ‘Hey, get the Memorial Field replacement funded, and just to get it kicked off, we’ll go down there and tear down the old one if you like,” he said. “That was probably almost two years ago when we first talked about that. I just kept telling him, ‘Hey, I’m serious. I’ll do that if you just get your project going. I’ll take care of the demo.’ So here we are doing it.”

It’s not the first time Apex Construction has offered its services out of community spirit. Another such project was the setting of the nine pilings for the Long Bridge swim. Not only do these pilings act as navigation markers for the swimmers during the race, but also they keep boats away from the rocks that lie just beneath the water there. 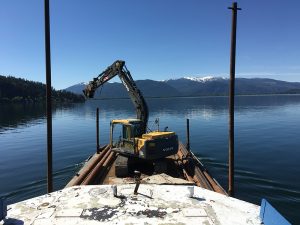 View from Apex Construction’s tugboat during the installation of the pylons for the Long Bridge Swim. Courtesy Photo.

“It’s not that difficult once you’ve done it a few times, but we had a barge and tugboat, and then we used a vibratory driver on a hydraulic excavator,” Woodward said of the specialized equipment used for the job. “… The steel pilings are loaded onto the barge, then just like a logging choker, they’re picked up, stood into position and vibrated into the ground.”

This project idea was sparked after Woodward noticed the original broken pilings as he drove along the Long Bridge one day. He knew he could help, so he gave a call to Woodruff. The Parks and Recreation director loved the idea and contacted the Long Bridge Swim organization to figure out whose permission he needed to make the project happen.

The Sandpoint Boardwalk, which Woodward worked on through its first two phases of construction, is yet more Apex handiwork.

“Every day I look down at that and enjoy the fact that we did that. It’s something that’s part of Sandpoint now,” he said.

Now a Sandpoint landmark, the boardwalk may soon see its third construction phase, which would run it from the Panida up to the Cedar Street Bridge. You can be sure Apex Construction will be putting in their bid for that job.

“I’ve been trying to pick out one item per year to make my contribution…” Woodward said. “We ought to do something every year. I don’t know when the next one is, but it will come up some day and we’ll go do it.”

Woodward grew up in Bonners Ferry, where his father was a city administrator. His family moved to Sandpoint in 1973, where they owned The Pine Street Bakery for four years.

After high school, Jim spent a year abroad in Germany studying the language he had grown fond of but was never fully immersed in. He later graduated from the University of Idaho with a Bachelors of Mechanical Engineering. This was followed by seven years in the Navy where he was assigned to a Trident missile submarine. Woodward knew he wanted to return to North Idaho, so he did precisely that and began working in the construction industry for eight years with C.E. Kramer. In 2008 he decided to start his own company here in Sandpoint: Apex Construction.

“We live in a community, and so I think that it’s important to participate, essentially,” Woodward said. “I remember at Sandpoint Beach when I was a kid, I was always told that my grandpa Frank helped build that pavilion down there. … He owned the Paint Bucket a long time ago and worked on that when he was younger. It was always just a memory I had. If you do something like that, then the memory lasts for a while.”

Apex’s current crew consists of Tyler Pauls, Tim Loudon, Jim Majchrowicz, Cody Bleckwenn, Spencer Pauls. Their normal line of work is usually marine construction and site development, but they’ve also taken on restoration work to develop streams, wetlands and spawning beds across North Idaho. When the opportunity presents itself, Woodward and crew will go above and beyond to complete projects solely for the benefit of our community.

“To be fair, there are often many players involved when it comes to initiating development that benefits our town such as the Parks Department, Waste Management [and] private organizations,” Woodward said. “I have to commend these guys who thoroughly get their hands dirty from a hard day of labor, all for knowing they will be making Sandpoint more modern and an overall better place to live.”

For more information on Apex Construction please visit their website at www.apexconstructionservice.com.