When most people think of a camel, their mind drifts to the dromedary, a hulking beast of northern Africa with a trademark hump on its back and a legendary ability to store large amounts of water in a region of the world where water is exceedingly scarce. You may not realize that there are a number of other animals related to the proud dromedary that fall into the camelid family — some of which may be lounging about in your neighbor’s yard.

Before we explore some local camelids, let’s look back at the standard: the dromedary. While it’s true that the dromedary “stores water” in its hump, if you were to jab its hump with a needle, it would not spring a leak or pop like a water balloon — though you’d probably get bitten and feel really horrible for poking the poor animal with a needle. The dromedary actually stores fat in this hump, which its body breaks down into water and waste in a similar manner to how humans break down fat cells when exercising and fasting. The waste portion of the fat cells is broken down into carbon dioxide, which is exhaled during exercise — or travel, in the case of the dromedary. 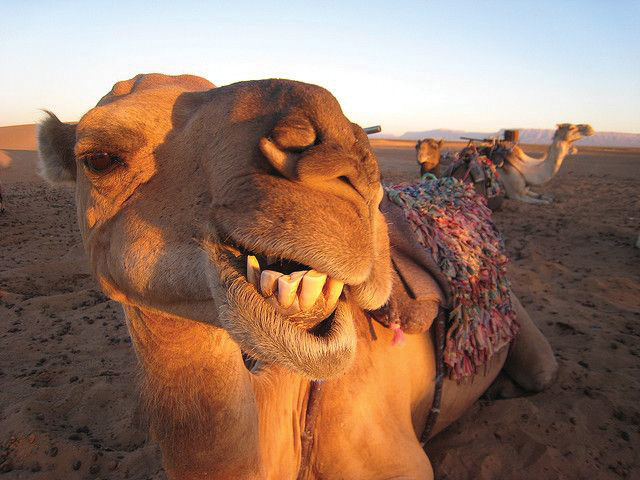 Dromedaries are large animals, comparable in weight to a medium-sized female cow. At their largest, they can get up to 1,300 pounds. Though generally docile creatures, a dromedary, as is true of most camelids, is shy about confronting a potential annoyance or aggressor — and at their size, they could easily do some damage if they wanted to.

Lucky for us, they don’t often want to fight, and instead have a more telltale manner in which they deal with what those of us in the online gaming community refer to as “aggro,” or aggression. Like every player in a baseball dugout: they spit.

Though humans and camelids spit for similar reasons — as a show of dominance and to discipline through shame — the contents of camelid spit is markedly different from that of a human loogie.

Most human spit is just hoarded saliva, that is, water and bacteria from our mouths, with the occasional addition of mucus drawn from glands in our sinuses. Camelid spit comes in two distinct varieties: misting and regurgitation.

A camelid that is feeling only slightly annoyed, or trying to shoo away another camelid or human it sees as competition, will sometimes spritz its target with a bit of spit-mist, akin to an actor in a slapstick comedy taking a spit-take. The second form of spitting is a legitimate defense mechanism: it will regurgitate partially digested food and lob it with the accuracy of a trained marksman.

The camelid will flatten its ears against its head (a common sign of impending aggression among most ungulates — around here, it is a common and frightening sight from a moose) and begin to gurgle. It will then draw a wad of unspeakably disgusting goo from one of its three stomach compartments and fire off a shot, which it can accurately land from up to 15 feet away. If you’re unfortunate enough to be caught by a cud projectile from its third and deepest stomach compartment, you’re in for a very smelly and unfortunate surprise.

Looking forward to getting spit on without having to fly across the Atlantic? You’re in luck! It turns out there are a number of camelids throughout the farmland of Bonner County, though I wouldn’t recommend just barging up into farms to search for them. You can get a great view just driving along the road, like a normal, non-invasive bystander.

Alpacas are a bit of a hobby among agriculturists throughout the world. While an alpaca may not look much like the dromedaries of Africa, they are indeed related. Alpacas are much smaller than their African cousins, standing about three feet at the shoulder and rarely exceeding 200 pounds. They are also covered in a thick coat of soft, insulating fleece that, when properly tended to, puts sheep’s wool to shame.

This wool is the primary purpose of raising alpacas — aside from how darn cute they are. An alpaca is capable of producing between five and 10 pounds of fiber a year, which doesn’t sound like a lot until you realize it’s measured and sold by the ounce, and you can make plenty of socks out of 10 pounds of fiber. Additionally, alpacas feel their safest in groups, requiring a herd of no fewer than three in order to feel comfortable and safe.

Thinking of pulling a Stardew Valley and giving up the city life to start your very own camel farm? You aren’t the first, so do yourself a favor: go check in with a librarian. There is a staggering number of books on the subject at our local library covering this topic in detail. Husbandry is a commitment, and not a task to be taken on a whim — especially when you consider the cost of purchasing, housing and maintaining these animals. Some alpacas sell for as much as $50,000 each.

I think I’ll just save my pennies for a Tesla. At least it won’t spit at me.