“The farmer ought to get the benefit of the present high cost of the things he produces. We ought also to help the consumer by eliminating the middlemen… I am opposed to a middleman who merely stands in the way. Our most essential object should be to look out for the interests of the men who till the soil and of the wage workers. If these two classes do well, we will fare well also.”

Roosevelt’s words continue to haunt us today. Over 100 years and several financial crises later, the problem of unproductive middlemen and floundering farmers is worse than ever.  Perhaps if the farmer and wage worker were more valued, we may have a chance to “fare well also” as a sustainable country. 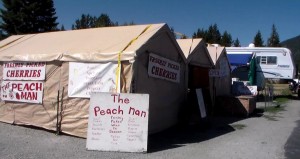 It’s not hard to see the value in Mike Vanlith’s 75-acre orchard, in Wenatchee, Wash. He grows peaches, plums, cherries, peaches, nectarines, prunes, apples, assorted vegetables and did I mention peaches? About two tons of a few different varieties sit in boxes on palettes. All of them were harvested within the last two days. All of them are beautiful, in my experience, with the “Peach Man” and his harvest.

Vanlith and his wife, Betty, have been married 38 years. They’ve been farming together for about 30 of those years. The devotion and respect for one another and their farm is inspiring. Though the work is hard and the pay is small, they love farming and hope to continue their work.

As I dig my hand into the bin of plump yellow-pink cherries, I talk with self-proclaimed social butterfly Betty Vanlith, an energetic woman with a hip sort of vibe. I told her how grateful I was to be getting pounds of perfect cherries for less than half the cost of the stores. She told me how grateful she was for the fruit stand itself. After all, they know firsthand how difficult it is dealing with middlemen or waiting for returns on shipments. 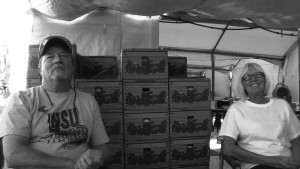 “You got all these middlemen on down the line,” she said, explaining how money they made in past cherry harvests did not cover the cost paid to picker.

“[It takes] 12-15 months to get returns from fruit shipments,” Vanlith said. “Last year we lost a lot of money in apples.”

Their Golden Delicious apples, for instance, were shipped out in 60 bins weighing 900 pounds each. After a year of waiting for the return payment, they found instead they owed money. They received a bill demanding $22 per bin because of a flooded harvest of Golden Delicious apples plus the dues paid to the middleman. For growing, harvesting and shipping ripe apples the Vanliths owed $1,320.

“After the broker gets their money, after the warehouse gets their money from packing … whatever is left is what the farmer gets,” Vanlith said. “If it’s nothing, it’s nothing. If it is $10, it’s $10. That is the truth. It is sad … I think this is why the small farmer suffers.”

“If you pencil it all out, somebody’s making money,” he added. “…And that is one of the reasons that small guys… we all are going to be out of business. It’s just a matter of time. A good example would be Walmart… they came in and knocked out your smaller stores because they can’t compete. The same thing is happening in the fruit industry.” 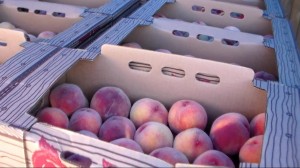 By contrast, the three fruit stands that they run are a win-win situation. Their fruit is paid for immediately at the time of harvest, while their customers get a great deal on a great product. The fruit stands were so highly praised by the “Peach Man” and his wife, literally as the salvation of their farm.

“I very much object to paying more when it means merely paying a profit to the man who stands between the farmer or the wage-earner and myself,” Vanlith said.

“Without the fruit stands, without the customer, we probably wouldn’t be farming.  Small farms are just disappearing,” says Vanlith.

Each of their stands offers a unique experience for shoppers. Their fruit stand near the Ponderay gas station has been a welcoming and helpful environment for customers, lacking the middleman that Roosevelt disliked 100 years ago. Overall, however, the Sandpoint location is the Vanlith’s favorite, the “most fun” place to sell fruit. With seven, soon-to-be eight grandchildren, the Vanliths love to see tree-ripened peach juice flow down the chin of a happy child.

“We love the people up here,” the Peach Man said.

The Peach Man’s story is one modern story of a struggling small farmer, reflecting a spectrum of struggling farmers, many of whom have lost their family farms. By creatively side-stepping the hierarchy of middlemen involved in fruit shipments, the Peach Man has been able to stay afloat through fruit stand sales.

“Knowing you have contributed something, something your proud of, makes you feel wonderful,” Betty Vanlith said.