With Spokane mumps cases growing worse by the day, LPOSD officials are contacting parents in preparation for the possibility of a local outbreak. While no confirmed mumps cases have been identified in North Idaho, LPOSD Superintendent Shawn Woodward said parents are being notified of the requirement for unvaccinated students to stay home if two or more mumps cases are confirmed at their school. 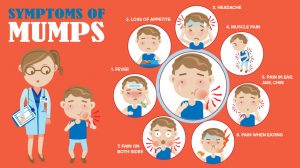 “We just follow recommended guidelines in the health department,” said Woodward. “We definitely don’t want to contribute to a mumps outbreak.”

In a letter sent to LPOSD parents in late January, registered nurse Dana Williams said the staff is going over records of all district students in light of the nearby crisis. If mumps cases are confirmed and unvaccinated children are required to stay home, LPOSD will likely follow Panhandle Health District and the Center for Disease Control’s recommended exclusion period of 26 days after the last case is reported, according to the letter. Once proof of vaccination is obtained, a child can return to school immediately should exclusions be enforced.

“We wanted to notify families that don’t do vaccinations about how this would affect their child’s education,” Woodward said.

According to Woodward, he’s heard anecdotal reports of local parents choosing to vaccinate their children with the MMR vaccine, which protects against mumps, measles and rubella, in response to the outbreak. As for the parents who choose to not vaccinate their children, they have offered relatively little push-back to the school’s policies, Woodward said.

“I was actually surprised,” he said, later adding, “I think the real push-back will be if we have to exclude any students from school.”

In the meantime, it’s worth keeping a careful eye out for symptoms of mumps. A virus that spreads through coughing, sneezing or contact with infected saliva, mumps typically results in a low-grade fever and a headache. The most signature symptom is a painful swelling of one or more salivary glands, often those located in the cheek area near the ear and at the back angle of the jaw.

While rare, mumps is also known to cause more serious complications. These include inflammation of the brain or brain and spinal cord tissue, inflammation of the ovaries or breast, sterility, spontaneous abortion, deafness and swollen testicles in some teenage and adult males.

According to Woodward, it’s worth taking a cautious approach given the extent of the outbreak in Spokane and East Washington. KXLY reports that at the beginning of the week, 152 cases have been confirmed, with CNN reporting an additional six cases by Wednesday. The outbreak affects 28 schools across three districts. Of the 158 cases confirmed, at least 91 people were vaccinated. Health officials are certain that, given the long incubation period for vaccines, more waves of the outbreak are on the way.

“We’ll probably have another couple of waves to experience, so we expect that this will likely go on for another several weeks to two months,” epidemiologist Anna Halloran told KXLY. “But it will eventually get better.”

A county-by-county canvass of Washington state by CNN, meanwhile, turned up 400 confirmed and probable cases of mumps. The outbreak affects eight counties, with 179 confirmed or probable cases in King County, 158 in Spokane County, 44 in Tacoma-Pierce County, nine in Grant County, five in Snohomish County, three in Ferry County and one in both Thurston and Yakima counties.

In the wake of the outbreak, CDC officials urge families to seek out vaccinations. According to the center’s data, the mumps component of the MMR vaccine is 88 percent effective at two doses and 78 percent effective at one dose. While it’s more effective in some individuals than others, health officials say that a broader range of vaccination coverage lessens the chance of the virus incubating and spreading among populations.

Even so, that will be a tough sell for parents suspicious of vaccinations, many of whom evidently live in Idaho. CDC data from the 2015-16 school year indicates that Idaho is among the lowest states in the nation in kindergarten vaccination coverage, ranking in at 90.2 percent. At 91 percent, Washington state doesn’t rank much higher.