Careywood has waited for fully-staffed fire service for years. Now, with a little help from a federal grant, Selkirk Fire, Rescue and EMS will give it to them. 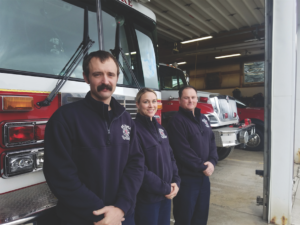 Selkirk Fire, Rescue and EMS Chief Ron Stocking announced this week that three newly-hired firefighters are in training to staff a new station serving the southern end of Bonner County. If all goes according to plan, the new station will be up and running by Jan. 1.

“I believe in a regional approach to fire service, and this definitely goes along those lines,” Stocking said.

That’s good news for the county’s southern residents, who previously saw emergency response times of 20 to 25 minutes from the Sagle station. Thanks to the new station, those times will be cut in half, Stocking said. The primary objective in the meantime is training the new firefighters who will staff the station: Chris Lewis, Tennille Toussaint and Cody Lile.

According to Stocking, the new recruits were chosen after establishing a hiring list. In order to qualify, applicants had to have a level of credentialed fire training and EMT experience.

“We’re super excited for this new opportunity and the chance to serve the community,” said Lile.

A southern-service station has been a longtime goal for Selkirk Fire, Rescue and EMS. But it got a serious jump start when the regional fire service won a $770,000 grant from the federal Staffing for Adequate Fire and Emergency Response, or SAFER, program. Under the grant’s terms, 75 percent of the new station’s cost will be funded for three years, Stocking said.

“It’s great,” he added. “It allows us to staff the station way sooner than we expected.”