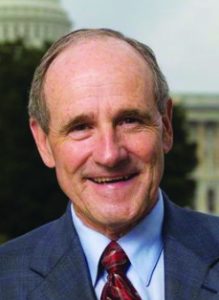 In a statement on the Senate floor Wednesday, Risch vigorously defended his objection to entering a letter by Coretta Scott King, Martin Luther King Jr.’s widow, into the record. Warren intended to read the letter as a part of her objections to Sen. Jeff Sessions’ appointment as U.S. Attorney General, which the Senate confirmed in a 52-47 vote.

“We have rules around here, and the rules are very clear that you don’t impugn another senator,” Risch said. “Now, you can’t do that in your words, and you can’t do it with writings.”

The letter in question, written in 1986, criticizes Sessions’ record as U.S. Attorney in Alabama. King filed the letter in objection to Sessions’ nomination to a federal judgeship, a position the Senate eventually denied him.

“Mr. Sessions has used the awesome power of his office in a shabby attempt to intimidate and frighten elderly black voters,” the letter reads. “For this reprehensible conduct, he should not be rewarded with a federal judgeship.”

Risch believes the letter is an attack on Sessions’ character, and his fellow Republicans agreed, ultimately voting to silence Warren for the remainder of Sessions’ confirmation debate. Warren received several warnings before the vote was cast.

“You can’t hold up a writing that impugns another senator and say, ‘Well, this is what someone else said. I’m not saying it, and that’s OK,’” Risch said.

Risch is backed by Senate Republicans, including Majority Leader Mitch McConnell, who defended the rare move to invoke Rule 19 and silence Warren.

“She had appeared to violate the rule,” he said. “She was warned. She was given an explanation. Nevertheless, she persisted.”

However, the decision outraged Warren’s supporters and received widespread reporting Tuesday and Wednesday. McConnell’s phrase, “Nevertheless, she persisted,” has since become a rallying cry for Warren supporters.