Superintendent Albertson: ‘We’re all in this together’

Trustees of the Lake Pend Oreille School District heard a presentation June 14 from Superintendent Tom Albertson on school safety and security — a concern that has only grown more immediate amid the nation’s yearslong epidemic of mass shootings.

The topic has been especially in the spotlight in recent weeks, following the May 24 killing of 19 students and two teachers — and the wounding of 17 others — at an elementary school in Uvalde, Texas.

Perpetrated by an 18-year-old man armed with an AR-15-style rifle, the Uvalde massacre has prompted nationwide calls for greater school and gun safety, with numerous polls showing increased support for controlling gun violence, and even some indication of bipartisan agreement in the U.S. Senate regarding legislation on “red flag” laws, expanded background checks, and increased funding for mental health and school safety programs, among others.

“It’s time that we review this,” Albertson said of LPOSD’s security measures and safety protocols.

Local schools have long had in place a number of policies and practices designed to secure schools, including lockdown, safety hold and evacuation drills — “all things that students and teachers train for,” Albertson said. 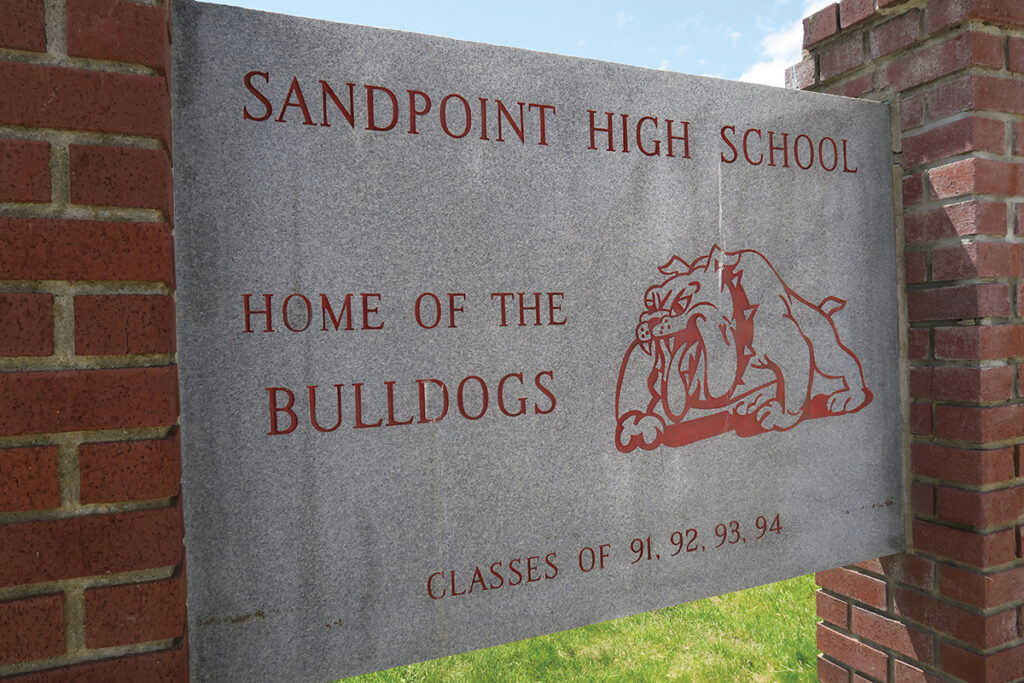 The welcome sign outside of Sandpoint High School. Photo by Ben Olson.

Every classroom in every school has a placard posted with procedures for each situation, as well as information such as the room number and physical address, should that information need to be conveyed to law enforcement.

Albertson said lockdowns involve a situation in which all exterior and interior doors are locked, as in the case of an intruder. Schools undergo a minimum of two such drills every year.

Safety holds occur when there’s something in the neighborhood of a school that is of concern — anything from a moose near the playground to police activity in the vicinity. In those cases, all doors are locked and students do not pass to their next classroom until the hold is lifted.

Evacuations are essentially similar to fire drills, with students and staff practicing how and where to exit the building and get to safety.

Safety inspections by the state result in assessment summaries for each school, resulting in a report that identifies strengths and weaknesses.

Meanwhile, Albertson said the school resource officer program provides security, while Sandpoint High School has its own full-time security. Law enforcement also has easy access to classroom keys, and all schools are equipped with cameras, which can be accessed directly from the dispatch center.

Albertson also highlighted the district’s tip hotlines for reporting potential threats, located on the LPOSD website — one covering the district as a whole, and another dedicated to Sandpoint High School.

“We’re all in this together for school safety,” he said, later adding, “even if you think it might not be anything, it’s important that you notify.”

In the wake of the Uvalde massacre, much attention has been paid to how the shooter was able to gain access to the school in the first place. Schools use a single point of entry to limit where and how anyone can enter the building. However, those systems aren’t always perfect, and single-entry points are usually left unlocked.

One parent with two students attending a local school told the trustees that “no door should remain unlocked.”

“We do not want broken halos and folded wings,” she said. “Let’s secure the schools this summer.”

Albertson said locking single-entry points “is definitely something that is up for discussion and review,” and an engineer is already working with the district’s Maintenance Department to assess what can be done to increase security at those access points. However, “some things we think would be easy aren’t.”

For instance, he said, many of the older schools in the district at some point had two sets of front entry doors, which could be reinstalled and equipped with a buzzer system and keypad. However, when they were built, they didn’t include enough room between the doors to meet ADA requirements.

“If we were to be building a new school now, I’m sure that the designs would be different than some of our schools [today],” Albertson said.

Some of the other safety measures the district is planning or in the process of implementing include assessments not only of front entry security but increased fencing on school properties. Incoming Superintendent Dr. Becky Meyer — who will take the reins upon Albertson’s retirement in July — will also be working with the director of the Idaho Office of School Safety and Security on assessments and plans to create a School Safety and Security Community Task Force.

“These are some of the things that will be happening very soon,” Albertson said, adding that work will also begin in July on ways to identify individuals who may be exhibiting signs of potential dangerous behavior and prevent tragedies before they can occur.

“School safety is really centered around the community being aware of anything that might be amiss,” he said.

Addressing the costs for increasing security measures in district schools, Albertson said those will become clearer following various assessments, though Trustee Lonnie Williams added that, “there is no amount of money that’s too much to ensure the safety of our students.”