With 23 of Bonner County’s 33 voting precincts affected by the LPOSD levy, 50.5 percent of eligible registered voters turned out for the election. That’s a huge increase from the last LPOSD levy vote—a 2015 supplemental levy supporting school staffing, programs and operations, which drew a 29.6 percent turnout.

The increased interest is likely due to the plant levy’s request of $55 million split over six years, a figure that would have reconstructed or massively overhauled Sandpoint Middle School, Washington Elementary and Northside Elementary and added structural additions and improvements to other schools. Earlier this year, an inspection team rated seven of the district’s 11 facilities as either “unsatisfactory” or “poor,” and the plant levy was proposed as a solution for the worst-rated facilities with the highest student populations. 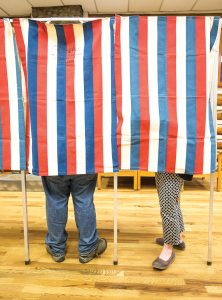 In the wake of the levy’s failure, LPOSD Superintendent Shawn Woodward said the planning committee and school board are taking a step back to analyze their approach to the levy proposal. They want to identify the effective elements and missteps while collecting feedback and suggestions from the public.

“The bottom line is we need to reflect on the result and process,” Woodward said.

To that end, the planning committee will soon meet to debrief on the election. A little later, the school board will go through a similar process. The idea is to look back on the last several months and open the process for local feedback before formulating a new solution to the problem of aging and decrepit school buildings, Woodward said.

A major element of that process will be a new feedback function added to the plant levy website, www.voteourschools.org. Voters will be able to share their thoughts regarding the failed plant levy campaign and offer suggestions for future efforts.

“This will be a way for people to give anonymous feedback if they choose to be anonymous,” Woodward said.

According to Woodward, there are plenty of other things to occupy school officials’ time. The new school year starts next week, for one thing. And administrators need to start planning a campaign to renew the supplemental levy next March, a two-year property tax that maintains a large percentage of school staff and programs.

“Attention will move to that in the immediate future,” Woodward said.

The plant levy was one of the most intensely contested proposals for the school district in recent years. While past school levies have had their detractors, the opponents of this year’s plant levy were much more organized, utilizing meetings, mailings and yard signs to drive their message. The debate between supporters and opponents played out on social media, with both sides fiercely advocating their cause.

This year’s proposed facilities plant levy gave many voters pause due to its sheer size, which supporters said was the most cost-effective way to address all structural issues at once. Opponents, however, said the tax increase was an unfair burden, especially for those living on fixed incomes. According to the school district’s data, the school tax burden on a $200,000 home with a homeowner’s exemption would have increased from $184 to $384 per year under the levy.

Opponents also said the district did not provide sufficient community involvement and feedback opportunities. With the new feedback and suggestion system, district officials hope to address this concern.