Don Carter has seen a lot change in Sandpoint in the 42 years he’s worked as the chief building inspector for the city. He’s gone through 14 mayors and 56 city council members and watched the population nearly double in his tenure.

When Carter announced he would be retiring from his long-held position in Sandpoint city government, city administrator Jennifer Stapleton and public works director Amanda Wilson planned a big party to celebrate his career of service with the city. Then the coronavirus outbreak happened, causing virtually all events to cancel overnight for the near future. Stapleton said they will “drag Don back in” when this is all over so they can properly toast him at a party in the future. 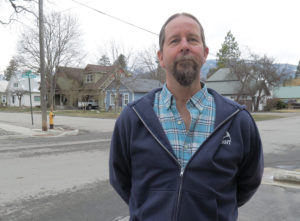 “Don is our institutional knowledge here,” Stapleton said. “We have two people with that level of tenure here: Don and Jackie Hanson with the Sandpoint Police Department. We will never see someone with that tenure in Sandpoint city government probably ever again.”

Carter began working for the city in 1977 under an employee training program.

When the program ended, Carter took a job at Bonner Concrete Products for a few months before he was approached by Sandpoint’s city engineer at the time.

“He said there was a job open for someone to do drawings for the engineer,” Carter said. “I had mechanical drafting in high school for a couple years and I knew the public works director too, so he said, ‘Sure come on in Monday morning, I’ve got a job for you.’”

“I really see Don as a mentor, not only for our staff in many regards, but also to the construction community as a whole,” Wilson said. “It isn’t just an enforcement matter. He educates builders about the code and the value of the code, as well as how to implement it. The code is fundamentally rooted in health and safety, so he’s the liaison between all of that.”

Wilson, who served as Carter’s direct supervisor since she joined Sandpoint government, said she couldn’t help but notice that the building community in Sandpoint has always had a tremendous amount of respect for Carter.

“In my perspective, he approaches things as a partnership,” Wilson said. “I’ve worked with a lot of inspectors in my career and there’s all different kinds of them. It’s an art to enforce things in a manner that is proactive and positive. I feel that Don has done his best and been successful in that.”

Wilson said it’s evident that many contractors feel the same way because they constantly pop in to see him at City Hall.

“People come by City Hall with no reason for a permit, they just want to see Don,” she said. “They see him as a partner in their success as well. I think that’s pretty cool. It doesn’t come overnight.”

Carter plans to finish remodeling his home and clean up his property, and said he is looking forward to riding his motorcycle and going fishing.

The party originally planned for Carter’s retirement was going to be a large affair held at Matchwood Brewing Co. before the coronavirus canceled everything. Stapleton said Carter is too important to let him retire without a party, so they’ll reschedule it for when this ordeal is over with.

“Don has kept us grounded,” Stapleton said. “More importantly, he’s kept us rooted. When I came here a little over 4 years ago and did the analysis of our workforce, we found that 60% of our workforce would be retiring over the next 5 years, and we’ve definitely seen that play out. As we’ve gone through those changes and shifts, Don has kept us rooted in the who, the what and the why of Sandpoint. That’s what’s important.”