Veterans Day is a reminder to honor those who have served and are currently serving. It’s also a time to recognize those members of our community who have stepped forward to serve in our various branches of the military. Many know Sandpoint local Luke Omodt as a government teacher in Bonners Ferry or for his recent unsuccessful run for Sandpoint City Council, but before that he was a soldier. Here is a bit of his story.

Luke Omodt first enlisted with the U.S. Army Infantry in 1997, not long after graduating from Sandpoint High School in 1995. Omodt was stationed in Germany and deployed to Bosnia, then Albania and Croatia. The Yugoslav Wars, a series of separate but related ethnic conflicts, civil wars and insurgencies, dominated the Balkans for most of the 1990s. Omodt served from 1997-2000, taking away many strong memories from his time.

“I will never forget being in a massive storm in Albania at a refugee camp and being able to see the abject poverty of the poorest nation in Europe that was being served by the richest nation on the planet,” Omodt told the Reader. “I truly understood how big the world was. 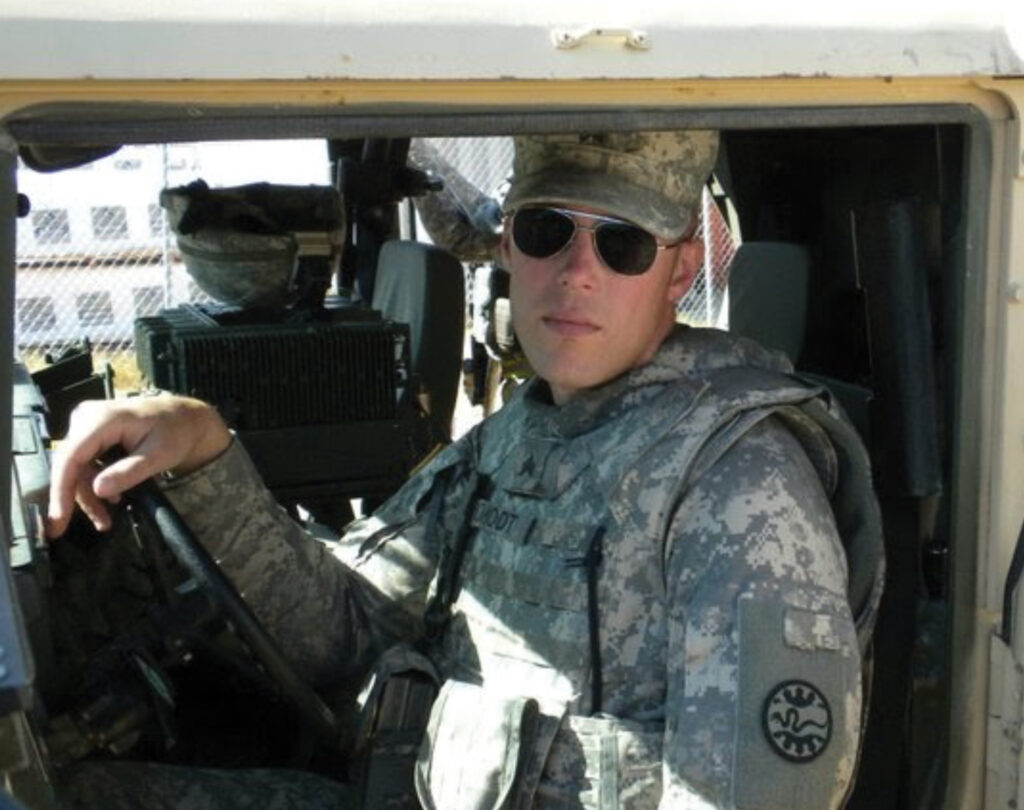 In this photo taken in 2011, SGT. Luke Omodt is getting ready for a patrol at Camp Cropper, Baghdad, Iraq while serving with A Company 145th BSB of the Idaho Army National Guard. Courtesy photo.

Omodt got out of the U.S. Army after 2000 and went back to college, then rejoined with the Washington National Guard to help pay for it.

“I got stop-lossed and sent to Iraq after 9/11, in 2004-2005,” Omodt said. “Stop-lossed is when they don’t have enough soldiers — I was signed up for one year — so they stop-lossed me, which basically means you’re not allowed to leave the military service and you’re going to Iraq.”

Though he originally signed up for a year, Omodt took the redirection in stride.

“Sometimes the world doesn’t work out the way you want it and you better just deal with it,” he said. “No one forced me to raise my hand.”

Omodt was sent back to the Infantry the first time he was sent to Iraq, and noticed some distinct changes to his service after the world-changing events on 9/11.

“The biggest change was between the end of the Cold War mentality under Clinton versus the George W. Bush era dealing with insurgency and embarking on nation building,” Omodt said. “We were trying to impart American values on exceedingly different cultures. When I was in Iraq, I was having the same conversations with different groups of humans in the same abject conditions [as in the Balkans in the late 1990s], and I understood that race and religion don’t matter, but good government does.

“I have such an appreciation for Sandpoint, because when you look at high school kids, there’s such an intense dichotomy between growing up here and going to City Beach or Pack River or Schweitzer versus kids outside picking through garbage looking for their next meal. We are so blessed.”

After serving in Bagdad from 2004-2005, Omodt got out again and married his wife Kami.

“I found out marriage was expensive and rejoined the Idaho National Guard and went back to Iraq in 2010,” he said. “That was with the unit out of Bonners Ferry. That’s one of the reasons I have such a strong connection to that community. There was a detachment from Bonners Ferry for about 50 years, which is now gone and turned over to the state, but there were 25 soldiers from Bonners Ferry who went to Iraq. I’m really proud of that.”

Omodt said the difference between serving with the National Guard versus the U.S. Army involves a different perspective on the job at hand.

“The biggest difference to being in the National Guard is that we’re older and slower, but we’re much wiser and more mature,” he said. “We have more lived experiences. We’re plumbers, teachers, truck drivers, electricians first, but soldiers always.”

Omodt’s current rank is Sergeant First Class, SFC, and he serves as the Transportation Platton Sergeant for A Co. 145th BSB, whose job is logistics.

In his civilian life, Omodt teaches government at Bonners Ferry High School, which gives him a special connection to many of his students who ultimately end up serving in the military themselves.

“One thing I’d like to mention is that I’m one of the few Guardsmen who have two soldiers who were also in his classroom,” Omodt said. “I take great pride in that. As a teacher, the important thing I’m thinking about is constantly renewing that relationship with military service and also those who are currently serving. I probably have 70 students who are in uniform or have been in uniform from Bonners Ferry. That community has a very strong number of students who join.”

Omodt said one thing that he appreciates when Veterans Day comes around is the renewed attention it brings to those who have chosen to serve their nation, in times of peace or war.

“I’m a proud advocate for service as a way to figure out skills and to learn about yourself in a structured manner to develop skills and relationships that last a lifetime, especially when you consider the international impact it has,” he said. “I have soldiers right now working on COVID orders, soldiers who participated in the support following Jan. 6 of last year. We’ve had soldiers who have also been on fire duty. That’s what I find so keen about the National Guard; we’re able to support the domestic needs of our country, as well as that of the nation. God bless the USA.”

After serving the better part of the past two decades, Omodt said he’s planning on retiring from the Idaho National Guard in the next six months to focus more on local issues.

All of us at the Reader thank him — and all veterans — for their service.