The headlines in the Pend d’Oreille Review of Friday, Nov. 8, 1918 sound eerily familiar: “Republicans Win County Election”; “With No New Cases of ‘Flu’ Schools Resume in Week”; “State a Clean Sweep for Republican Ticket”; “Influenza Calls Three Victims in Twelve Hours”; “Teachers Receive Salaries: Shutdown of Schools Because of Influenza Will Not Stop Their Pay.”

However, amid the six-column broadsheet spread — and above the fold — is one news item that could only have happened in its time, and remains a curiously forgotten episode not only in local but national history. 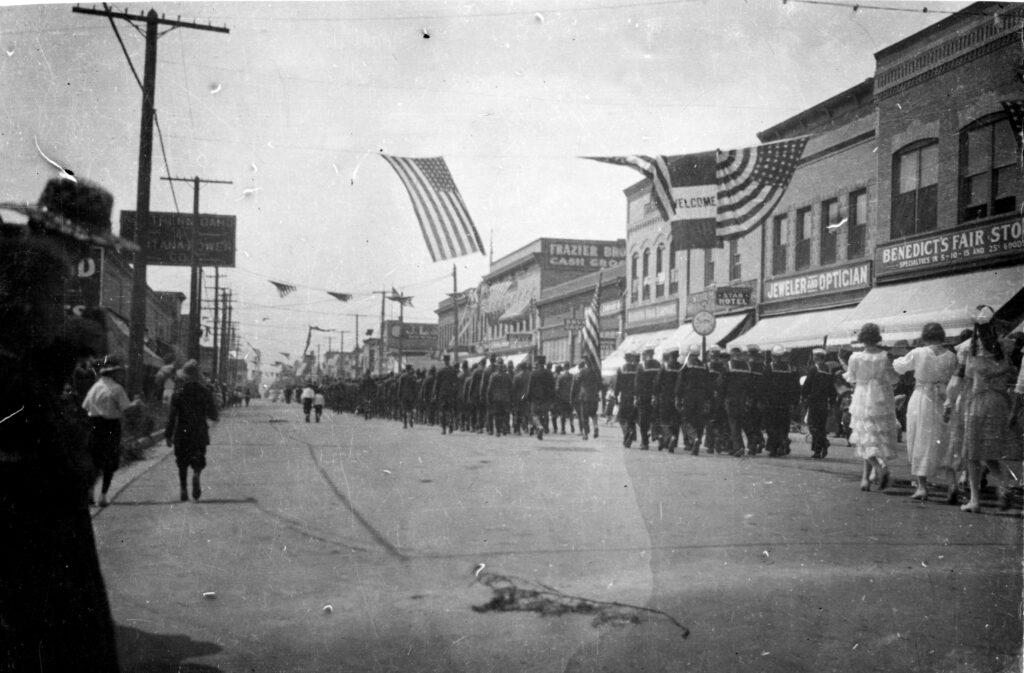 “Doughboys” and Red Cross volunteers march down First Avenue in Sandpoint prior to deployment to France in World War I. Photo courtesy of Bonner County Historical Society, donated to the collection by Wilma Allen.

“Peace Flash Was a United Press Hoax,” the Review reported. “Sandpoint Celebrated the Close of the War Prematurely Yesterday … Other Towns Also ‘Stung’ … With Word That Germany Would Lay Down Her Arms and Had Signed Armistice Bedlam Broke Loose.”

That’s right: Sandpoint, as well as an unknown number of other communities both big and small, thought World War I had ended on Thursday, Nov. 7 and cut appropriately loose, only to find out that what would come to be called “Armistice Day” — and later “Veterans Day” — wouldn’t become a historical reality until Monday, Nov. 11, at 11 a.m. in France. The news flash on Nov. 7 was a mistake.

The first time Sandpoint celebrated Armistice Day, it did it twice.

The Review’s account of the false peace celebration is by turns deadpan — almost embarrassed — and amused.

“Staid old business men hopped upon the motortrucks and blew whistles, threw confetti and yelled themselves into state[s] of hoarseness which it will take days to mend,” the paper reported. “[T]he only regret is that when peace really does come such a spontaneous and uproarious rejoicing can hardly be duplicated.”

And uproarious it was. According to the paper, the merrymaking was “some little hummer” that “lasted all day.”

The first report came to Sandpoint via telephone at the Humbird office, from Mrs. T.J. Humbird in Spokane, who said folks in the Lilac City were also toasting the end of the war. At the same time, the Review learned, a flash had gone out over the Great Northern wire: “[T]he authenticity of the news was not doubted for an instant.”

According to the paper, Humbird mill whistles sounded in Sandpoint and Kootenai, at the same time the fire and school bells pealed.

“People came running from their houses, business houses were immediately closed; automobiles, their horns honking and flags waving, were soon forming a parade,” the Review reported. “The city fire apparatus, drays and autotrucks joined the automobiles and within a half hour a parade two blocks in length was making the round from the head of Cedar Street to the foot of First Avenue. Bedlam broke loose for a fare-you-well.”

There were even a few injuries reported: “Cyril Wilcox ran in front of W.H. Finney’s car as it rounded the Cedar and First street corner [and he] was knocked down and received a scalp wound and several bruises.”

Not to worry — the car was “running at a low speed and Mr. Finney brought it to a stop before the wheels passed over Wilcox.”

Meanwhile, Norris Brundage on his motorcycle accidentally hit James Turpin, bruising the latter sufficiently that he was to be confined in his home “for a few days.”

In a show of camaraderie and chivalry, the men of Clark Fork rustled up $80 between them and hit the road for Heron, Mont., for a party of unspecified character. However, once they got there they realized they’d left out their lady friends, and so raised another $18 to buy them candy.

The excitement died down after 8:30 that night, when news spread of a Spokane Chronicle dispatch to that city’s mayor notifying him that the original report from Paris had been in error, yet had gone out “all over the United States before it was overtaken with denials,” according to the Review. “Even in Washington [D.C.] the news spread like wildfire and resulted in the noisiest demonstration that Washington ever experienced.”

Somewhat abashed, the headline in the Northern Idaho News of Tuesday, Nov. 12, 1918, stated simply, “City Celebrates Coming of Peace.” However, there was still a bit of vim and vigor left in Sandpointians: “First Announcement on Thursday Proves to be a Misfire, But Impromptu Celebration Was Full of Pep — Second Time is Sure and People Are Filled With Joy.”

The News coverage of the actual Nov. 11 armistice struck a distinctly more somber tone, leading with the direct statement: “The Great War — the greatest in all the warlike pages of history — is ended. The peace which hundreds of millions of people all over the earth have prayed for these weary months, has at last settled upon the earth again, and no longer, fathers, mothers, wives, brothers, sisters and other near ones will peruse the daily casualty list with bodeful hearts, nor follow with trepidation the fortunes of the battle line.”

Far from succumbing to patriotic sentiment, the News soberly noted that the United States had participated little in the war, compared to its allies in Europe. However, while “not deeply touched by its seriousness for months,” the steady increase of Red Cross, YMCA and Liberty Bond work, as well as an increase in local draftees, had helped “impress upon the people the deep responsibility of the business of war — work, suppression, sacrifice, service, privation, suffering, loss, duty.”

As reporters, poets, scholars, politicians and faith leaders around the country also framed the conflict, the writers and editors behind the News applauded the defeat of the “doctrine of brute force on all mankind,” and expressed their relief that “war and all its attendant duties was at an end … that no more of our brave boys need be sacrificed on foreign soil.”

In its Nov. 12, 1918 piece on the armistice, the News pivoted from the headline of the day to strike a somewhat defiant tone surrounding the premature hullabaloo that previous Thursday.

“Is it any wonder that Sandpoint suddenly becomes light-hearted and joyous and care-free?” the paper wrote. “Is it any wonder that any of the hundreds of cities when they read the news immediately dropped their business and took a holiday and cut capers and frisked and gamboled like schoolboys? With the war come to a stop all other matters seemed trivial, for the moment at least.”

According to the News, merchants had barely opened their doors on Nov. 7 when the whistles started blowing and bells started ringing, catching Sandpoint “unprepared for a celebration of any kind.” Yet, “the flags at once blossomed out, the stores closed — no one wanted to do business, the multitudes began to gather and the parading up and down the streets began.

“Noise was at a premium. Anything that would make noise was a treasure trove — the louder and the more rancorous the better. … Automobiles, gay with bunting or flags, and bearing shouting crowds, formed processions and honked their way up and down the streets as the parade broke up and reformed only to break up and reform again as they wound around the paved streets of the downtown section. There was no method, no system: everything was spontaneous, impromptu.”

Like the Pend d’Oreille Review, the Northern Idaho News made note of the widespread nature of the “hoax” peace and its resulting celebrations — including in Washington, D.C. — where on Nov. 7 “the government, once the carnival of noise and clamor got under way, had to dismiss the clerks in all the departments,” the News reported.

With a few days of reflection, the News was able to describe in better detail how the preemptive armistice report spread through the wire services: Apparently, a United Press correspondent at a Belgian port heard that an admiral had received a telegram that it later became clear hadn’t been confirmed. The Review, in its initial reporting, chalked up the “peace hoax” to a combination of “Wall Street purposes” stemming from a “brokers’ wire and in a United Press dispatch from Paris.”

Call it wishful thinking, call it the fog of war or call it “fake news,” the job of reporting the news hasn’t gotten any easier regardless of the technology involved.

Still, “these facts after celebration was over did not have much to do with celebration as such, and everybody said the morning after that he was glad he had had the opportunity to whoop ’er up a bit just for the grand old flag and for things in general,” the News wrote.

The actual first Armistice Day celebration in Sandpoint, on Monday, Nov. 11, 1918, included area residents streaming into town “from surrounding villages and camps,” contributing to a downtown parade with decorated cars and trucks, as well as a bonfire at First and Second avenues, and Cedar Street roped off for an orchestral performance. A number of speakers held forth from the bed of a truck at Main Street and Second Avenue, and the “younger folk” kept at it into the evening, with dancing and other “merrymaking.”

As the News summarized it: “And so it come to pass that Sandpoint has twice celebrated the defeat of the Huns, and most everyone was willing to admit that it was worth two celebrations. The first was more peppy and spicy and the second the more formal and correct.”