On the drawing board for years, the Pine Street Sidewalk improvement project is beginning in earnest with crews now on the job between Boyer and Division avenues, placing traffic controls to close one lane on Pine Street and begin tree removal.

Work began April 26 and is scheduled to occur Monday-Friday, from 8 a.m. to 6 p.m., with sidewalk construction expected to begin in May. Crews will work block by block, starting from Division and working east toward North Boyer Avenue. The city anticipates the entire project to continue through the end of August.

The project is intended to remove and reconstruct old sidewalks, construct new sidewalks and curb ramps, as well remove trees, install traffic controls, and restore asphalt and landscaping with the goal of providing a continuous 2,700-foot pedestrian pathway on the north side of Pine between Boyer and Division. 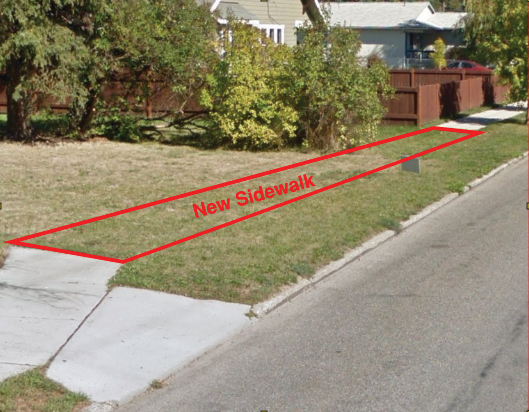 An example of infill, which will connect gaps between existing sidewalks.
Photo courtesy city of Sandpoint.

According to the city, “This critical east-west corridor connects residential neighborhoods, schools, recreation and assisted living facilities on the west side of Sandpoint to the downtown business core. The lack of continuous sidewalk along Pine Street creates a challenge for users. When [a] sidewalk is unavailable, pedestrians commonly share the roadway with moving vehicles.

“Completion of this project will provide a continuous and accessible pedestrian route along Pine Street, greatly improving safety and mobility.”

Planning for the Pine Street Sidewalk Project began in 2017, when the city applied for an Idaho Transportation Alternatives Program grant, which it was awarded in March 2020. After further analysis, the city put the project out to bid in July 2021 but canceled the solicitation when no bids came in. The bid went out again in January and was awarded in February to Sandpoint-based CoyotePak Construction in the amount of $369,800.

The project is being funded 92.6% by federal dollars and at least 7.3% by the city of Sandpoint, which allocated funding for the Pine Street improvements in its fiscal year 2020 and 2021 budgets.

Residents along the portion of Pine Street between Boyer and Division avenues should expect construction-related noise during work hours, temporary sidewalk closures and traffic controls. The city stated that later this year it will replace the trees it removes as part of the project. Affected property owners are invited to view replacement options on the city’s approved street tree list and contact Maeve Nevins-Lauter, who manages Parks Planning and Development and administers the city’s urban forestry program, at [email protected] or 208-946-2711.

Residents will receive door-hanger notifications 72 and 24 hours prior to work adjacent to their property, as well as advanced notice of work that will affect their driveways.

The city reminded residents that vehicles and other obstructions may not block the public right-of-way, including vehicles extending from driveways where the sidewalk will be constructed. No parking signs will be temporarily installed to allow workers to get to the site. While the city added that access to homes and businesses will be maintained at all times during the work, driveway access may be temporarily restricted, in which case the city will notify residents ahead of time.