In a quiet back room of Monarch Mountain Coffee, Larry Mooney is busy cultivating future musicians on his favorite instrument: the guitar.

Mooney has been teaching a method of guitar instruction known as the ChildBloom Guitar Program since 2007. His instruction is paying off; two of Mooney’s students were recently recognized with a national award. 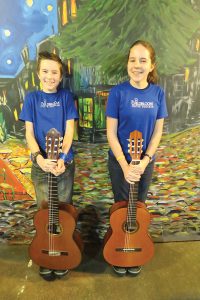 Israel Yandt, left, and Isabella Yandt, right, pose with their guitars after a lesson. Photo by Ben Olson.

The ChildBloom Guitar Program originated in Austin, Tex. By a NW University professor who recognized there was a shortage of guitar instructors teaching children under 10 years old. With this program, kids start as early as five years, using specially sized guitars with nylon strings and utilizing a group method so kids can see success early on.

Siblings Isabella Yandt, 14, and Israel Yandt, 12, from Sagle are experiencing that success themselves. Each year, ChildBloom hosts a national competition by age and skill level. At Mooney’s urging, Isabella and Israel entered the contest as a duet, playing an intermediate song called “Inca Dance.”

“We did a video tape and the kids got it in one take,” said Mooney.

The tape was submitted in November, and by January, the Yandts heard back that they had won third prize in the national contest.

“I was so happy,” said Alexandria Yandt, the proud mother of Isabella and Israel. “I know how many people were involved and how many other kids had submitted. I was so proud of them.”

There were entries from 17 different states from around the nation. 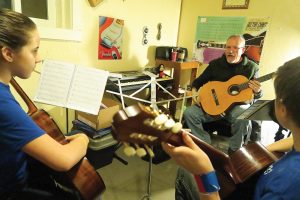 Larry Mooney, center, teaches Isabella and Israel Yandt at his studio in the back of Monarch Mountain Coffee in Sandpoint. Photo by Ben Olson.

Along with the award, the siblings earned a check for $20 each. When asked what they planned to spend the money on, they said they’ll “have fun” with their 3DS game systems (though their mother wants them to start a savings account).

“These are the kind of results you can get, especially when you have a very supportive family like they do,” said Mooney, speaking of the Yandts.

“We’re a very musical family,” said Alexandria. “I played the violin, their father plays the piano and harmonica, and their grandfather played the piano.”

Isabella was attracted to the guitar because of her love for music. She claimed that listening to an Alan Jackson song piqued her interest, and she began lessons when she was eleven years old.

Israel began playing when he was eight year old because he liked the guitar. He remembered watching a movie that featured a child playing the guitar and wanted to begin lessons then.

Mooney said the teaching program is a gradual process which breaks songs into separate parts. Every child learns all the parts of each of dozens of songs. After that phase, he then begins to teach his students to read music.

When not playing her guitar, Isabella likes to spend time with her animals: “We have chickens and cows and rabbits,” she said.

Israel’s hobbies also include archery. Last year, he placed third in 4H with his compound bow.

To contact Larry Mooney about enrolling your child in the ChildBloom Guitar Program, check out www.SandpointGuitar.com or call (208) 290-2632.