Tilikum died on Jan. 6. In a kinder world he world he would be a vibrant, middle-aged dominant male, like a chief in a pod of orcas, swimming 100 miles a day. In the interest of corporate greed, however, compassion is often neglected. In 1983 Tilikum was stripped of his free life at the age of two while he was breastfeeding and learning how to be a great whale. 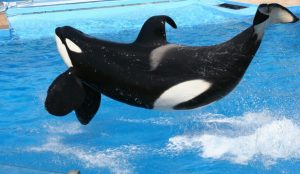 At nearly twice the size of the average captive whale, Tilikum spent his life cramped. A great deal of his life was spent entertaining crowds on a platform, unable to move at all. Incarcerated killer whales almost always suffer from dorsal fin collapse, sunburn and illnesses from mosquito bites, which are not issues in the wild.

His friends and advocates say that he was “liberated” upon his death, that finally he is free from the misery he lived. There was hope, from me as well, that after the stunning documentary, “Blackfish,” things would change.  They are changing, but not quickly enough for Tilikum. He died while lying on concrete, isolated from his pod, premature, with a pathetically sad dorsal fin.

Actually there were organizations and charities that wanted to sponsor a better life for this massive whale. The hope was to channel “Free Willy” as the real plan with Keiko unfolded, and get Tilikum into a an ocean pen, feeling the rhythms of the ocean, soaking up the microbiology of that water, living as best as he could. But SeaWorld would not relinquish their “commodity.” His sperm was used to create dozens of captivity-born whales; a whole new subspecies of an otherwise majestic and social ocean creature.

Although they are called “killer whales,” there has never been a recorded incident of them being dangerous to humans in their wild habitat. Four deaths have occurred with orcas in captivity, and three of them were victims of Tilikum. One of the people he killed was a famous trainer, Dawn Brancheau.  The other was a man who snuck into Orlando’s SeaWorld to visit the great orca. Tilikum ate off the man’s genitals and drowned him. According to a trainer John Hargrove, author of “Beneath the Surface,” many of the whales do masochistic mutilations with seagulls, carving them up delicately in their boredom. Sometimes they are so bored they damage their teeth by chewing away the walls of their prison cells.