Owners of local food trailer The Twisted Kilt Black Iron Grill are contemplating changing their business name after receiving a legal threat from an international corporation. 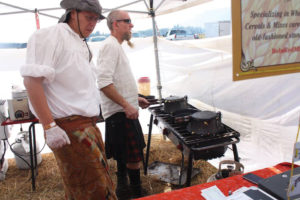 According to food trailer owner Aaron Seitz, his small operation, which specializes in gluten-free cornbread waffles, has received a cease-and-desist letter from Tilted Kilt Pub and Eatery, a restaurant chain with more than 20 locations across the United States and Canada. In the letter, Tilted Kilt attorneys claim that Seitz’s food trailer is an infringement on Tilted Kilt’s trademark and an attack on its brand recognition.

“Tilted Kilt does not currently have any locations in your immediate area, but Sandpoint is a tourist town that attracts people from all over, which may include places where Tilted Kilt restaurants are currently operating,” reads the letter.

“Our client is therefore concerned that a consumer … will assume, mistakenly, that there is some association between Twisted Kilt and Tilted Kilt,” the letter later adds.

“That’s absolutely ridiculous!!!!” wrote Susan Chivers on the Facebook post. “A) how can they trademark the name of a garment that has been in use for hundreds of years and b) your name is NOTHING like theirs.”

The post, which has been shared almost 70 times, is filled with dozens of similar comments and received almost 70 reactions — mostly “angry” reacts.

According to Seitz, a part of him wants to take on Tilted Kilt in a David-versus-Goliath-style fight. However, he said that Tilted Kilt has issued cease-and-desist letters to numerous restaurants with “kilt” in the name. He said one business owner he contacted spent $30,000 fighting the franchise before ultimately changing his restaurant name, and he worries he simply doesn’t have the resources for a lengthy court battle.

“I’m just a little guy, you know what I’m saying?” he said. “I make it from week to week and month to month as it is.”

According to Seitz, the closest Tilted Kilt restaurant to Sandpoint is located almost 700 miles away in Alberta, Canada.

The Tilted Kilt belongs to a genre of eateries that have inspired the moniker “breastaurant” — establishments better known for their scantily-clad female servers than their food. It’s a style of restaurant that has come under increased scrutiny in recent years for persistent problems of sexual harassment. The Huffington Post reports that in 2012, The Tilted Kilt was sued by 19 Chicago servers who claimed they were subjected to a “sexually hostile, offensive, humiliating and degrading” workplace run by a “predator” of a manager.

“There were requests for sex,” Mark Roth, the servers’ attorney,  told CBS. “There were degrading comments that were made. Something that no woman should have to put up with anywhere, let alone by their manager in the workforce.”