When Samuel Gentz looks at an old piece of wood, he doesn’t see junk. He sees treasure. Potential. A creative medium that takes a little finesse and love in order to repurpose it into something useful and beautiful.

The Wisconsin-born woodworker first moved to Sandpoint with his family in 2004 when he was 16 years old, but he got his start in the shop much earlier than that.

“I come from a long line of woodworkers,” he said. “My dad and both my grandfathers were woodworkers.” 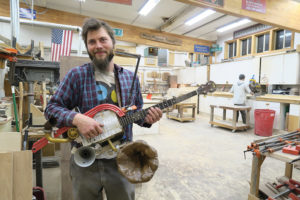 Samuel Gentz with his one-of-a-kind banjo. Photo by Ben Olson.

Gentz said he first started working with wood when his grandparents used to babysit him before school.

“From about five in the morning until I had to go to school, I spent every day with my grandpa in his woodshop,” said Gentz. “My dad’s dad, Roy, made furniture, but his main thing was clocks. Very intricate stuff.”

Gentz developed a keen interest for woodworking, which he turned into a career about five years ago when he was hired at rustic furniture shop Northwest Handmade in Sandpoint.

“I worked there for two years for Dan (Mimmack) and learned a lot of good stuff,” said Gentz.

It was after a friend mentioned Gentz’s creative woodworking to the owners of Misty Mountain Furniture that he was asked to join the crew on Fifth Avenue.

“They came to me,” said Gentz. “They happened to need somebody and left a note on my door.”

Gentz currently works part time as shop manager at Misty Mountain, producing high-quality pieces of furniture utilizing his rustic, off-the-wall style that redefines itself with each new project. He creates unique pieces built to order as well as creative pieces that stem directly from his imagination.

“We hired Samuel because we needed a skilled craftsman. We really had no idea how motivated, creative and skilled he was,” said John Edwards, co-owner of Misty Mountain Furniture. “He really is the full package from Google sketch-up to CAD drawings to incredible craftsman skills and innovation.”

While each project offers a new set of parameters, Gentz finds the most joy in working with reclaimed, distressed materials.

“It’s really fulfilling working with reclaimed materials,” he said. “I feel like I’m giving new life to something old that no longer serves its original purpose.”

For a showing in ArtWalk last summer, Gentz produced several pieces that epitomized the nature of reclaimed work. One was a corrugated reclaimed bookcase, with old corrugated metal pulled from the Grainary and reclaimed wood used from an old mine.

Another piece is a rustic coat rack made with pine that was blowtorched to bring out the old saw marks in it. Gentz added a vintage gold pan along the bottom to serve as an umbrella holder and wrapped a distressed piece of metal around the base both for stability and aesthetics. The end result is a coat rack that would be equally at home in a rustic cabin as it would a luxury lake house.

Gentz said he enjoys hunting for materials just as much as producing furniture.

“Most of my materials I get for free,” he said. “It’s either wood someone doesn’t want, or rusty metal. I find a lot just driving around and rooting around in trash piles.”

One odd creation of Gentz’s is a banjophone, complete with vintage horns and sound boxes repurposed from old Gramophone record players.

“I saw a gas can banjo on YouTube some years ago where somebody basically stuck a banjo neck on a metal one-gallon gas can,” said Gentz. “They’re not really loud, and I didn’t want to deal with pickups and electricity so I thought about how I could amplify it acoustically.”

Gentz struck gold at a garage sale when he found three vintage Gramophone players for $20.

“Two of them were in a house fire and nothing worked on them still,” he said. “But the soundboxes were intact. Over the course of the year I added all three soundboxes to the banjo and now it has volume.”

Gentz said he always tries to go into a project with a plan, but leaves room for improvisations.

“I usually have a general idea of how I want the design to go, the profile, the curves,” he said “Sometimes you just step back and it kind of changes directions. I find that I’m able to be more creative when I have some limitations. If I only have a blank piece of paper and a pencil, nothing happens. But with wood, there are limitations. The board is only so wide, it’s only so long, it can only withstand so much weight. If I have these parameters, I can be more creative.”

Many of Gentz’s pieces on display at Misty Mountain speak to his unique style, with a combination of old and new wood, metal and leather pieces and other creative flair. He can take a 100-year-old pile of junk and turn it into a work of art. But it’s not an easy, quick process.

“I’d say I spent about 30 hours on that corrugated bookcase, not including dreaming about it and putting it in AutoCAD and getting the wood,” said Gentz.

Gentz said he utilizes the age old technique of trial-and-error for many of his projects, which often don’t have examples to pull from because they haven’t been done before.

“I like just messing around, having fun,” he said. “That’s the fun part: doing something new every time. That’s why I really like making one-off pieces, because everything about it is different.”

To view Samuel Gentz’s pieces, head over to Misty Mountain Furniture at 502 Cedar St. in Sandpoint or check out his Facebook page under Samuel Gentz.

The latest edition of the Sandpoint Reader has arrived online, and will be distributed around town in the next few hours. This week, we have a comprehensive update on the two lawsuits surrounding the Festival at Sandpoint weapons policy, content from some fresh and some veteran columnists, and a little history on the ~Pend Oreille Paddler~

Find this issue in area grocery stores, or at sandpointreader.com.
... See MoreSee Less

ADVISORY - ROAD CLOSURE: "Chestnut St. between N. Boyer Ave. and Florence Ave. will be closed today (Tuesday, Aug. 11) for water main repair. Detour signs are in place. The work will be completed by the end of the work day. Please use alternate route." ... See MoreSee Less

ALERT from BCSO: "Highway 95 near the Country Inn in Sagle is currently closed due to an accident. Please use an alternate route. Thank you." ... See MoreSee Less