‘These are working Idahoans’

Founders of the political movement Reclaim Idaho spent last weekend in Sandpoint to officially launch their initiative to get Medicaid expansion on the 2018 state ballot.

Through gatherings both in Sandpoint and Hope, Garrett Strizich and Luke Mayville — along with a swath of volunteers — brought awareness to their Medicaid for Idaho campaign.

Strizich and Mayville flashed through Sandpoint before traveling south over this past week, collecting signatures from Wallace to Lewiston and beyond. The group is in Coeur d’Alene Saturday. 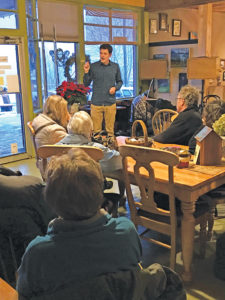 Reclaim Idaho co-founder Luke Mayville speaks with a crowd at the Hope Cafe last week about the movement’s initiative to get Medicaid expansion on the 2018 state ballot. Photo by Ellen Lizotte.

Political initiatives in Idaho must gather signatures from six percent of all registered voters statewide and also from six percent of voters in 18 districts. This is somewhere in the ballpark of 56,000 signatures. The tentative deadline to collect all these names, Strizich said, is sometime in April.

And there’s another big number: 78,000. That’s how many Idahoans fall into the “Medicaid gap,” according to the Reclaim Idaho founders.

“These 78,000 people — these are working Idahoans,” Strizich said. “These are people we see everyday while we go about our daily business. These are the people that are going to be helped by this.”

As people streamed in and out of the Sandpoint Community Hall Saturday afternoon, signing petitions and sharing healthcare stories, Strizich addressed a full house.

“And this is going to save money,” Strizich said, noting that the most recent data shows that Bonner General Hospital has already spent $3 million in 2017 from treating uninsured patients — a cost that is ultimately passed on. “We’re already paying for this.”

Hope resident Ellen Lizotte attended the gathering and signed the petition as soon as she arrived.

Before leading the charge in the Saturday afternoon door-to-door petition quest, Mayville spoke to the Community Hall crowd about how they are pursuing Medicaid expansion in the spirit of a “government for the people” belief. He asked people in the crowd share their personal stories of healthcare woes, then encouraged them to share those stories as they went around asking for signatures in the coming months. 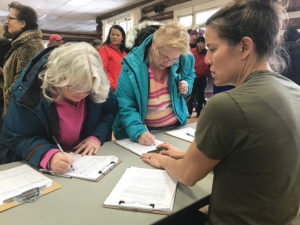 “The most effective thing is if you just go out and tell your story and why you care about this,” Mayville said.

He shared stories of people across the state taking the lead in their counties to gather signatures. He said people both directly and indirectly affected by the Medicaid gap are becoming leaders in their regions.

In Bonner County, that’s Linda Larson. Anyone looking to help gather signatures or spread awareness can contact her at [email protected] Theresa Renner is also helping mobilize local Medicaid expansion activists, and can be reached at [email protected]

Cynthia Dalsing, NP of Women’s Healthcare located at 1215 Michigan Street Suite C, has offered to be the Sandpoint business location for Reclaim Idaho. Stop in anytime Monday-Thursday 9 a.m. to 5 p.m. to sign the Medicaid Expansion petition.

To learn more about how to help collect signatures, submit signatures or to make a donation, visit www.reclaimidaho.org. To keep up with Strizich, Mayville and the rest of the team while they’re on the road, follow Reclaim Idaho on Facebook.