Panida adds five to board at annual meeting

Membership, COVID and the uncertain future was on the docket at the meeting

The Panida Theater added five members to its board Saturday, Oct. 17 during the nonprofit’s annual meeting, which drew about 50 community members — all socially distanced with the majority wearing masks.

Elected board chairman in August 2019, Lenny Hess, led the meeting by noting that, “we are in unprecedented times” with the pandemic still affecting businesses like theaters across the globe.

“But, small arthouse theaters like ours will be where people come out of hibernation to see shows and connect with people again,” Hess said. “We have a lot of work to do and I believe we are ready.” 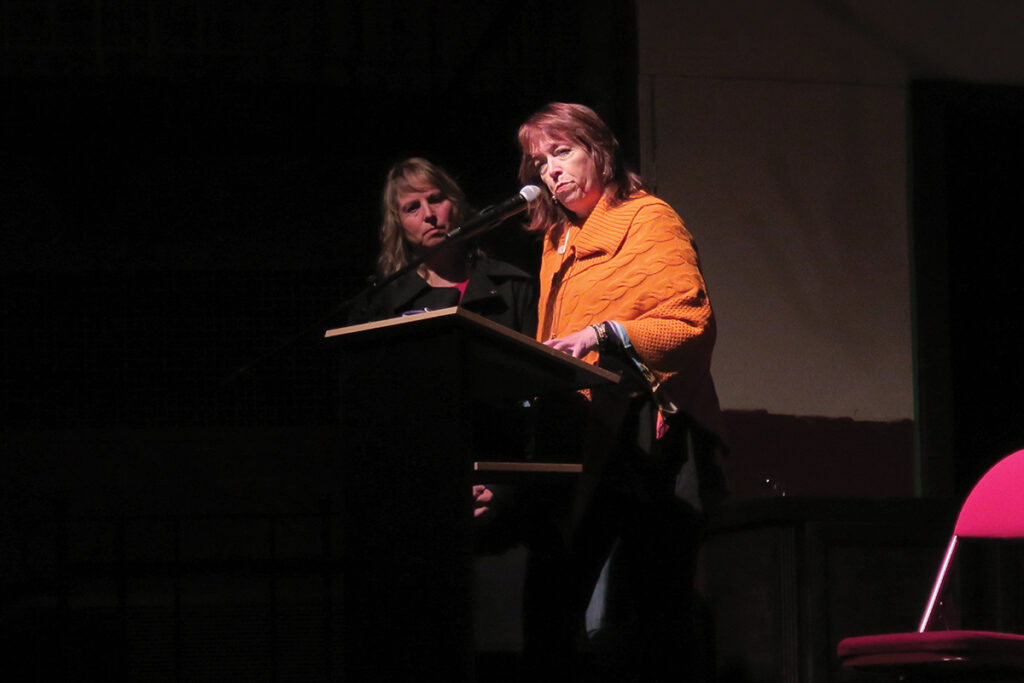 Hess said he holds the Panida in a special place in his heart, remembering being dropped off at the theater when he was a young child and seeing so many classic movies of yesteryear. He added that fundraising efforts and community-driven donations are vital to ensuring the Panida stays around for a long time.

“Please help,” Hess said. “Fundraising at this time will be critical.”

The Panida board issued packets to each community member attending the meeting containing a profit and loss statement, a balance sheet, a call for volunteers to join Panida committees and a comment card.

After giving away several door prizes donated by local businesses and board members, five candidates briefly introduced themselves for consideration to join the Panida board; Keely Gray, Kevin Smith, Ron Ragone, Tari Pardini and Teresa Pesce.

After secret balloting from the audience, Hess announced that all candidates received enough votes to officially add them to the theater board. The additions bring the current board to 9 members, including current members Carol Thomas, Abby Ullman, Foster Cline and Lenny Hess.

Executive Director Patricia Walker addressed the attendees, again emphasizing the importance of live theater in an artistic community like Sandpoint.

“You can sit home and watch Netflix and Amazon Prime, but you can’t duplicate live theater,” she said.

Walker said the pandemic has led to a difficult season for the theater, but not to forget that the Panida has often represented hope for the community — especially in times of adversity.

“Every economic downturn, the fact that the marquee lit up and people would save their pennies to come to the Panida — it gave them hope things could continue,” Walker said. “But with COVID, we couldn’t come here for hope. … Hearing you laugh and clap tonight, helps me feel that hope again.”

Walker said that many theater chains were unable to survive the pandemic, creating the situation where “we may be the bigger cat in town now.”

Acknowledging that next year will likely be an “experiment,” Walker said she was optimistic after the Panida turned a profit even after these difficult months of 2020.

The profit and loss statement showed that from August 2019 to July 2020, the Panida pulled in profit of more than $8,100, but, Walker noted, that included sales from the Panida’s ice cream booth at the 2019 Festival at Sandpoint, which represents a significant portion of annual fundraising.

Even with a robust 2020-2021, with The Festival at Sandpoint canceling its 2020 season and no ice cream booth income, the Panida will likely have to hustle to make up the difference. In comparison, the theater registered a loss of more than $1,200 the previous year and a profit of more than $11,100 in 2017-’18.

Worth noting is almost $45,000 received in donations and contributions from the community during this fiscal year — a vital piece of the Panida’s annual fundraising effort.

Walker said she is optimistic about the new board members and the renewed sense of stewardship over the historic theater, saying that “there has been a lot of chaos and backseat driving, but this is the fresh start. This is where we get behind this board. This isn’t about somebody’s personality, this is time for us to unite. I hope we remember that as we go forward and support these people with no more division, because the Panida is for the whole community. That’s always been our guiding force.”

Community members sounded off on a few issues they found worthy for the board and staff to give their attention to, including a call for more regional and national live music concerts, questions about a potential sprinkler system, a call for more grant writers to increase grant revenue and how to weather the changing world amid COVID-19.

Foremost on community members’ minds, though, were the membership parameters. Currently, the Panida has a $60 per year basic membership and a $1,200 per year VIP membership available, but several meeting attendees asked for an option somewhere between. Others wanted to maintain the current system of membership, which granted voting rights for anyone who attends a Panida event, regardless of whether they can pay for a membership or not. The board assured the audience that nothing has changed on that score — anyone who attends a Panida event can vote on board members.

The meeting was adjourned after Walker reminded those in attendance that the live theater presentation of Clue would be on stage Thursday, Oct. 22-Sunday, Oct. 25. Visit panida.org for more info.