Among the many dramatic changes stemming from the global coronavirus pandemic is that social events, including funerals and church services, have had to alter their operations to ensure these once communal gatherings are responsible and safe in the era of social distancing.

For Dale Coffelt, who has owned Coffelt Funeral Services in Sandpoint since 1970, the business of caring for the dead has remained unchanged in the era of coronavirus, but daily interactions with family members have altered slightly.

“We’re doing most [things] over the telephone,” Coffelt told the Reader. 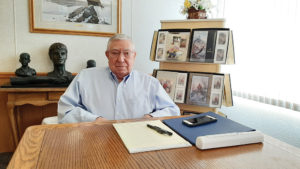 Coffelt said he can obtain statistical information to file death certificates via telephone with family members of the deceased, which helps him prepare everything before one or two family members come in to sign and review the necessary documents.

“All the families have been very understanding and respectful,” Coffelt said. “We have a sanitary station out there [in the lobby], and everyone has been really careful. The concern goes both ways, because they’re very concerned for us, too, and what we deal with.”

Coffelt said in his 50 years of being in business in Sandpoint, one thing has remained the same: respect for the dead.

“It’s so important to me that we respect the dead,” Coffelt said. “That has not changed.”

While in-office visits are still possible in a limited capacity, Coffelt said funeral services at the Moon Chapel or inside churches have been postponed. Small, graveside burial services still allow family members to properly grieve for their loved ones.

“We were limited to 10 people, and then the state came down that we’re to have no actual funeral service in a funeral home, church or a place of public gathering,” Coffelt said. “But we can respect the dead with the graveside burial and address the other issues later.”

Coffelt said what he laments the most is the loss of personal connection with the bereaved in their time of grief.

“After 50 years, I know a lot of the families around here,” Coffelt said. “I came here in March 1967, so I know generations of families. With so much handled by the telephone now, we’re missing that interpersonal contact.”

At Lakeview Funeral Home, Funeral Director Jerad Addison said while they continue with burials and cremations, funerals have been postponed.

“I do see most families adjusting well to the new guidelines,” Addison said. “They have chosen to postpone services on their own until the virus is under control. People in this community are level-headed and logical.”

Addison said it’s not uncommon for a funeral home to delay funeral services due to harsh winters or muddy spring weather.

“We are handling this situation like a storm that will eventually pass,” Addison told the Reader. “Families are grieving the loss of one family member and at the same time they are wanting to protect other family members from getting the virus at a funeral service. They are balancing the continued physical health of family and friends with their emotional health and the importance that a funeral service has in the grieving process.”

He said that while social distancing guidelines have made it difficult to perform all the typical duties of a funeral director, Lakeview is still able to properly respect the dead and assist grieving families in their time of loss.

“It is a difficult adjustment to not shake hands or hug people,” Addison said. “I still sit down, face to face, with grieving family members to make funeral arrangements, but today, there are less chairs around the table.”

Along with funeral services, area churches have had to adjust their format to remotely serve their congregations.

Eric Rust, the lead pastor at Cedar Hills Church, said it was a stroke of luck that Cedar Hills began launching an “online campus” in 2019.

“The idea was to create a digital community where people from anywhere in the world could participate in a live CH gathering,” Rust told the Reader.

Cedar Hills began purchasing all the equipment and trained leaders in the fall of 2019, hosting its first online experiences in October.

“So when we made the decision last month to go 100% online, we were fortunate enough to have a lot of the leg work behind us,” Rust said.

“It’s hard to know how many people are engaging online every week, but it looks like we are actually able to reach more people via our online platform than we were meeting in a single physical location,” Rust said. “We’ve got people from across the U.S. and even on the other side of the world engaging with us online. It’s pretty cool.”

“I think that, worldwide, the church has been forced to think about what we do in a different way,” he said. “I for one am really optimistic about what we are learning, and hope churches don’t squander this opportunity. Cedar Hills will never go back to just meeting in physical locations — our online presence is here to stay and will continue to grow in the years to come.”

As we all adapt to this strange new reality, there remains some solace in the fact that humans are adaptable and will make it through as long as they stick together and help one another in need.

“So many churches, businesses and neighbors are finding creative ways to serve and care for those around us,” Rust said. “It’s true that crisis usually brings the best and the worst out of humanity. I’ve seen nothing but the best in North Idaho. Makes me proud to be part of this community.”