Euthanasia for the forest

Some individuals are able to ask their physician whether suicide is a reasonable option to end their pain and suffering. Many of the trees on the 50,000-acre Buckskin Saddle Integrated Restoration Project, a.k.a. timber sale, on the Sandpoint Ranger District have no such choice. The trees that are proposed to be killed are not necessarily sick or diseased but are species that the sale’s draft Environmental Assessment considers “undesirable.”

If this seems eerily familiar, it should. 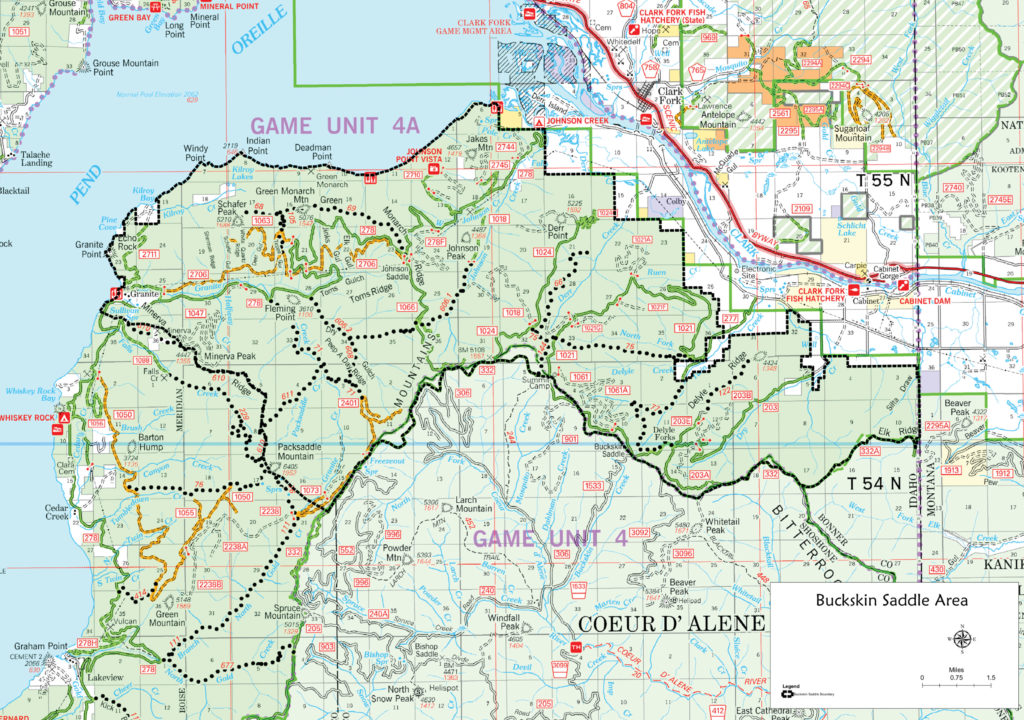 A map of the Buckskin Saddle Area by the U.S. Forest Service.

The timber sale is located on the east side of Lake Pend Oreille and to the south of the Clark Fork River, to the southeast of Sandpoint, bordering Clark Fork. The area includes the Green Monarch Mountains, Schafer Peak and Packsaddle Mountain. The proposed logging will occur mainly in the Granite, Johnson, and Twin Creek drainages — all impaired streams exceeding either sediment and/or temperature limits.

The U.S. Forest Service, assuming the role of physician, proposes to “restore” forest health by prescribing logging of 13,400 acres of “undesirable” trees and constructing 95 miles of roads. Included are 12,596 acres of clearcut type logging, which consists of seed trees, leaving about five trees per acre, and shelterwood, leaving 10-20 trees per acre. The “undesirables” are Douglas fir, western red cedar, hemlock, grand fir and lodgepole pine.

Large trees greater than 15 inches in diameter — no upper size limit given — will be cut on 10,490 of those acres. Logging of 332 acres of trees in the Schafer Peak Inventoried Roadless Area is also proposed.

The draft EA then calls for planting these “clearcuts” with 12,773 acres of nursery raised seedlings of “desirable” trees, such as western larch, western white pine and ponderosa pine. The draft EA makes the highly disputed claim that this species conversion and clearcut logging would “improve resistance and resilience to fire, insects and disease.” In reality it would reduce the forest’s genetic and species diversity, and change what is currently forest to a tree farm.

The Forest Service calls for many of these clearcuts/openings to exceed 40 contiguous acres. To legally do so it must get special permission from the regional forester. No problem. Permission has already been granted to create 51 of these very large openings in the timber sale ranging in size from 41 acres (31 football fields) to 2,256  acres (1,706 football fields).

Many of these incredibly large openings are subject to increased wind and sun exposure, thereby getting drier and increasing fire risk.

These areas are prone to mid-winter rain-on-snow events that could result in flows exceeding stream capacity, and increasing the possibility of road failures — both of which could add large amounts of sediment to the affected streams. The draft EA states it cannot estimate the amount  of sediment produced from these events. Spring snow melt in these large openings occurs earlier, often reducing critical late season steam flows.

To access the undesirable trees the timber sale will add 80% (95 miles) of sediment-producing road construction to the existing 120 miles of roads in the project area. Proposed are 30.4 miles of new road construction with 11 stream crossings, plus the reconstruction of 65 miles of densely vegetated, currently “stored” (or closed) roads with 14 stream crossings. These stored roads were beginning a decades-long healing process. Reopening them is like pulling a scab off a wound.

The EA claims that the risk of road failures and increased sediment delivery would last for 15 years. Sediment does not magically disappear, but accumulates in the streams and could further degrade the habitat for westslope cutthroat and the endangered bull trout.

Then there is the Forest Service’s cavalier attitude to its contribution to the Earth’s top health problem: climate change.

The EA’s Climate Report states that, “The Buckskin Saddle project would affect only a tiny percentage of the forest carbon stocks of the Idaho Panhandle National Forests, and an infinitesimal amount of the total forest carbon stocks of the United States.” What’s more, it “would not have a discernible impact on atmospheric concentrations of greenhouse gases or global warming.”

Most of the world is concerned about the logging in the Amazon and its effect on climate change, yet there is more logging in the United States than any other country in the world. The Forest Service needs to acknowledge its cumulative contribution to the problem.

It defies logic that the Forest Service can make our forests “healthy” again by clearcutting 12,596 acres, creating thousands of acres of contiguous openings, building 95 miles of roads and focusing on cutting “undesirable” tree species.

Logging the forest to save it is the prevalent management scheme on the Idaho Panhandle and other regional National Forests.

All this forest destruction is done under the cover of the Forest Service endlessly promoting fear of wildfires, insects and diseases. Repetition and fear work. It has much of the public and many politicians believing the myth that logging will reduce the perceived problem.

Corporate profits and job security is the real reason that the Forest Service abuses the public trust. Follow the money.