The noise and disruption of a major construction project wasn’t enough to keep Sandpoint residents away from the library. Even so, staff and patrons alike are eagerly anticipating the formal unveiling of the Sandpoint library expansion, which is just starting to shine after a year of construction. 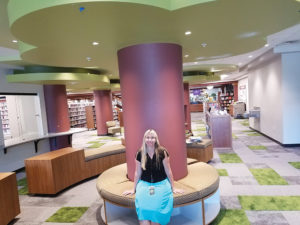 While work on the project’s final details is expected to extend into August, the expansion is close enough to completion that library officials are ready to introduce it to the public.

A grand opening celebration is planned for Saturday, June 2, from 12-4 p.m., which will feature presentations of the new spaces, refreshments, tours and a special announcement officials are saving for the occasion. The event will also include entertainment by the Sandpoint High School Choir, Folk Remedy, Cecil the Magician and Bridges Home.

From the beginning, the chief challenge of the project was moving construction along in a timely manner while ensuring the library’s service remained available to the public. Given a library’s need to encourage a quiet, contemplative environment, that was no easy task. But according to project manager Brandon Spry, construction workers and library patrons struck a workable balance over the past year.

“This was a project that as a whole we really enjoyed,” he said. “We definitely had complications with keeping the library open, … but our goal was to make sure the city of Sandpoint could utilize this space, and they definitely did.”

Timblin was ultimately impressed at just how many residents continued to frequent the library during the most invasive phases of construction.

“The project has not deterred people from coming at all,” she said.

“The biggest surprise was just how understanding the patrons have been,” she later added.

Among the new additions to the library are a variety of new seating areas, including one with a nearby fireplace. Timblin said these areas are ideal for the increasing numbers of people who bring their own laptops, tablets or other technology to the library rather than using the library’s computers.

The new space upstairs also makes room for an expanded young adult fiction section. Previously relegated to just a few shelves, the new YA section allows for a dramatically expanded collection. Also upstairs is the new computer section, which now comes complete with a dedicated tech support desk. Timblin said those with mobility issues can still easily access the computers by using the library elevators.

The children’s library is another section that has seen a major growth spurt. While there is plenty of space for events and a dedicated area for the children’s librarian, the centerpiece is an elaborately decorated circular seat fashioned in the shape of a tree — staff members call it the Circle of Life.

“The children’s library is sponsored by a family who has done a lot for the library: the Gilmore family,” Timblin said. “So we’re naming it after them.”

Virtual reality is another exciting new attraction coming to the library. With a whole room dedicated to the VR system, library lovers have entirely new virtual worlds waiting for them to explore.

Last but not least, the new teen lounge may well become a favorite after-school destination for students thanks to its electronic offerings and convenient location to the high school. The lounge will be decked out with tabletop, board and video games in addition to other cool tech.

“It’s a great place for kids to just come and chill out,” said Timblin.

Community members can check the lounge out for themselves at a teen tech mixer coming up 4-5:30 p.m. Attendees can check out the VR system and games while winning prizes, enjoying refreshments and offering suggestions for the lounge. Afterward, they can stick around for pizza and prizes while the Idaho Internet Crimes Against Children Task Force breaks down youth safety in an online world. Topics include problems like cyberbullying, exploitation and human trafficking, so the discussion is recommended for teens age 13 and older.

All in all, it’s been a whirlwind year for library staff. According to Timblin, they’re excited for the work to be complete, but the journey getting there was memorable in its own right.

“It seems like it went by really fast,” Timblin said.